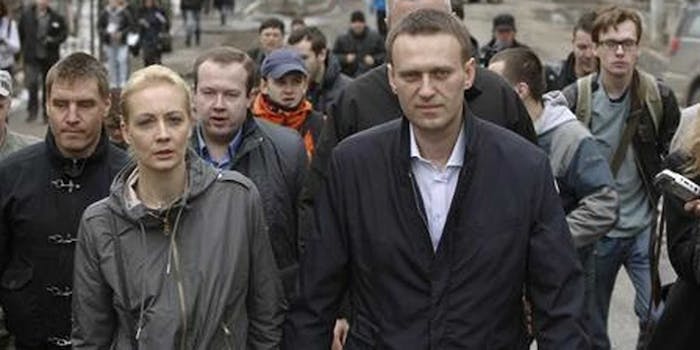 Navalny was unexpectedly released after protesters in Moscow opposed his arrest. He will continue his campaign for mayor.

Alexei Navalny, the Russian dissident leader who was sentenced to five years in jail Thursday for trumped-up and politically motivated embezzlement charges, was unexpectedly released Friday.

A judge has allowed Navalny to be released while he waits on a legal appeal. The decision was likely made to quell the passionate demonstrations that took over Moscow following the initial verdict and sentencing. Navalny supporters there, in his hometown, took to the streets in massive numbers Thursday evening, with police arresting more than 200 protesters. They have since been released.

As a condition of his release, Navalny will not be able to leave Moscow, but he will be able to resume his populist campaign for mayor of the city. The election is in September.

Navalny, who for years has used his LiveJournal blog and social media to organize massive protests of Russian President Vladimir Putin’s regime, took to Twitter Friday to rally his supporters.

“Even if it is temporary, let’s use the time to pull the crooks,” wrote Navalny, fully aware of how fragile his freedom is at the moment.

Navalny’s campaign and trial have become tricky political situations for Putin and his United Russia party. Navalny’s rise to political prominence began in 2009 when he started his LiveJournal blog railing against government corruption under Putin’s 13 years of rule. The blog has since propelled him into mainstream media status at home and abroad. He’s also become the unofficial leader of an unregistered Russian political party, the People’s Alliance.

However, his role in criticizing Putin during 2011 and 2012 elections led the state to take renewed interest in alleged timber embezzlement charges against Navalny, stemming from his time as an unpaid advisor to the governor of Russia’s rural Kirov province.

Universally in the West—and to many within Russia—the charges are seen as an effort by Putin’s administration to silence Navalny. But with his current campaign for mayor, it’s difficult for Putin to mask these political motivations. As the Atlantic Wire notes, many see the charges as a naked effort to keep Navalny out of the race, clearing the path for a pro-Putin candidate.

If Navalny is jailed during the campaign, there will likely be unrest similar to what was witnessed after his conviction. If he loses, many will question the legitimacy of the results. This is especially true, given the public scrutiny this ongoing trial has generated. And if Navalny somehow wins and assumes office, the continuing appeal means that the elected mayor of Moscow could find himself removed from office and jailed on dubious charges.

The legitimacy of the case against Navalny has already been called into question by many U.S. officials.

“The numerous procedural shortcomings in this case also reinforce our broader concerns about rule of law in Russia,” White House Press Secretary Jay Carney said shortly after his conviction.

And news of his temporary release was met with celebration.