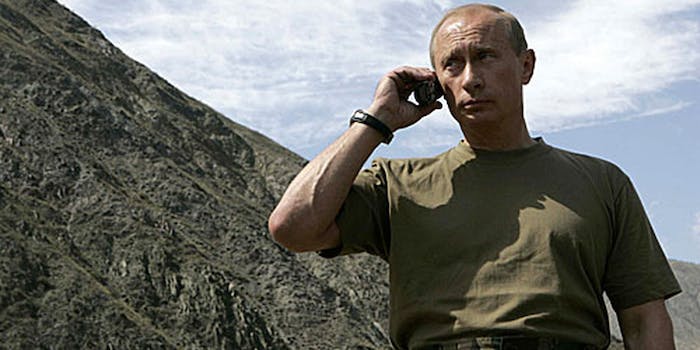 Amidst it’s unpopular siege of the Crimean peninsula, the Russian government is blocking domestic Internet access to several Web pages in support of the Ukrainian protesters who recently drove the country’s pro-Russian president from power.

The Associated Press reports that Roskomnadzor (the Federal Service for Supervision in the Sphere of Telecom, Information Technologies and Mass Communications) has blocked access to 13 pages on VKontakte, Russia’s leading social network. All the pages are in support of the anti-government movement in Ukraine, which recently force President Viktor Yanukovich’s into exile in Russia.

In a statement released on Monday, Roskomnadzor said the order to block these pages came from the general prosecutor’s office, which said the groups “propagandized the activity of the Ukrainian nationalist groups.” The statement from Roskomnadzor also said the banned groups are encouraging “terrorist activities” and “participation in unsanctioned public events.”

The largest of the banned groups had more than 500,000 members. Access to these sites was not available within Russian territory as of Monday. According to the Associated Press, the Internet in Russia has “remained largely free from censorship,” particularly when compared to state-run traditional media outlets. This relative freedom has allowed political opponents of Russian President Vladimir Putin to have a voice. That’s been the case for opposition leaders like Alexei Navalny, who built his following through LiveJournal.

Though the political crisis in Ukraine has been percolating for months, the stakes were greatly raised this past weekend when Putin ordered Russian troops into the Crimean peninsula, which, located at the southern end of Ukraine, is separated from Russia by narrow strait less than 10 miles across at its widest point. With some 6,000 troops, Russian forces have seized border posts, military facilities and a crucial ferry terminal on the Ukrainian side of the straight without much resistance. They’ve also moved warships into the area and marshalled ground forces just across the water ready for a full-scale invasion.

Russian diplomats have denied acting aggressively, insisting their motives are ones of self-defense against the region’s political instability.

“This is a question of defending our citizens and compatriots, ensuring human rights, especially the right to life,” Russian Foreign Minister Sergey Lavrov told the U.N.

According to the Associated Press, there have been no reports of Ukrainian demonstrators deliberately taking hostile action against Russian-speaking citizens during the past four months of protest.

The crisis in Ukraine began last November, when student protesters began to assemble in opposition to Yanukovich’s decision to spurn an economic pact with the European Union in favor of closer ties to Russia. Following a violent crackdown on those demonstrators, the protests grew into a wholesale denunciation of Yanukovich’s regime, which has been characterized by corruption and desire to consolidate power.

Violent street protests that resulted in more than 80 deaths ultimately drove Yanukovich from his country and into safe harbour in Russia. In seizing Crimea, the Russian government has demanded that Ukraine’s provisional government adhere to an earlier agreement to form a unity government with Yanukovich.

The crisis is having significant geopolitical ramifications around the world. U.S. President Barack Obama has threatened economic and diplomatic actions to “isolate Russia,” if the country continues with its current plans. Obama also called on Congress to pass an economic assistance package for Ukraine.