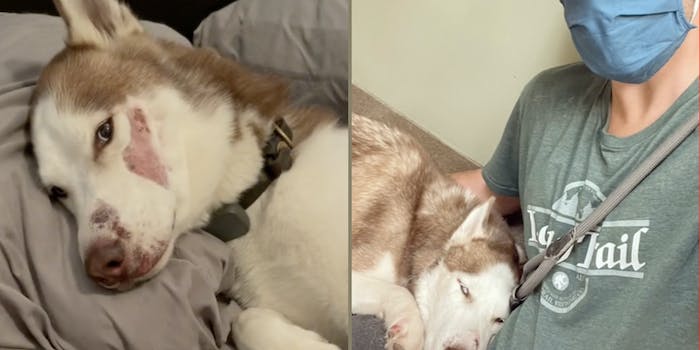 ‘His personality is gone’: TikToker says his dog was burned, traumatized after being watched by Rover sitter (updated)

Rover has been criticized in the past for its sitters' treatment of dogs.

The dog sitting company Rover is under fire after a recent TikTok went viral showing how a dog left under the care of a Rover sitter was returned to its owner with burns on its face, other physical injuries, and emotional distress.

In the last few years, Rover has been spotlighted for horror stories of dogs being mistreated, injured, missing, and even dead under the care of its workers.

In a recent TikTok series, owner Stewart shares the traumatic experience he and his dog Grover underwent while using the service.

In the first video posted by @redgroverredgrover five days ago, the dog, who is a red husky, can be seen lying on a bed with what appears to be large burn marks on his face. He seems to be docile and uninterested in the food and water that is sitting on the bed with him. It has over 5.5 million views.

The TikTok’s caption reads: “TW- ANIMAL ABUSE. TikTok do your thing. My dog stayed with a Rover sitter over the weekend and this is the state I picked him [up] in.”

In the second video, he says the dog is in so much pain and “his personality is gone.” The TikToker also shares screenshots of messages between him and the Rover sitter, whose name is blocked out.

The conversation starts by the sitter asking if Grover has separation anxiety and explaining that when the sitter left the dog alone, he apparently rubbed his nose raw on part of a door. Stewart says that behavior doesn’t sound like Grover, and the sitter then goes on to hypothesize about what could have happened.

“It’s all good—the door I can fix it’s not that bad, just wanted you to know! It might be because i had a dog dropped off this morning and he might have been trying to get to them maybe? I put peroxide on it and cleaned it, he just seems to be acting weird now I think cause he hurt himself.”

They then discuss pick up times and drop the subject. Later, after Stewart picks up Grover, he asks the sitter what exactly happened since Grover was in much worse shape than he was expecting.

“I went to cycling this am and when I came back I walked into him having a blanket ripped up and his nose was rubbed raw and part of the front door frame scratched up. From what I can tell I think he heard the dog we got this am in the other room and was trying to get to him considering normally when I leave him in the house for a bit he just hangs on the couch and chills out,” the sitter writes.

The dog owner then says that Grover has puncture wounds on his face. The sitter sends photos of the door frame that is scratched up and says they don’t know how he would have gotten any puncture wounds.

The TikTok shows a screenshot of a bad review of the sitter from another customer whose dog was injured during their care. It says that the sitter in question cares more about attending workout classes than caring for clients’ dogs and that she is “deceitful” and it isn’t worth risking your dog’s safety to work with her. It also says their dogs were returned to them in a horrible state, having lost weight, with dirty crates, and with no energy.

In July, CNN reported on six dogs that died while in the care of Rover sitters. They suspect there are even more deaths unreported due to legal reasons. The article describes absolutely devastated and heart-broken pet owners who had no idea that a simple dog sitting or a walk in the park could result in them losing their best friend permanently.

Stewart says in the TikTok comments that Rover has been good at communication and cooperation during this time, and that he and Grover have acquired a lawyer. He has posted other videos documenting Grover’s recovery as he begins to eat more and get back to his old personality.

Many TikTokers were quick to say that these injuries most likely resulted in Grover having extreme separation anxiety, but Stewart denied those allegations.

Others offered support for both the dog and owner, and wished them an easy recovery.

“I have owned huskies my whole life, and they have the most amazing personalities! I am so sorry this has happened to you, wishing him a speedy recovery, and hope he finds his personality again soon. 🥰 Such a beautiful boy,” wrote @oliviakane25.

The Daily Dot reached out to the dog owner through email.

Update 5:52 pm CT Sept. 26: In a statement to the Daily Dot, Rover spokesperson Dave Rosenbaum said the company has given Stewart a refund and a reimbursement for veterinary expenses. He also said the matter was investigated and the sitter has been removed from the platform.

“We join with Grover’s family in wishing for a full and speedy recovery and we are deeply sorry he had this experience,” Rosenbaum said.