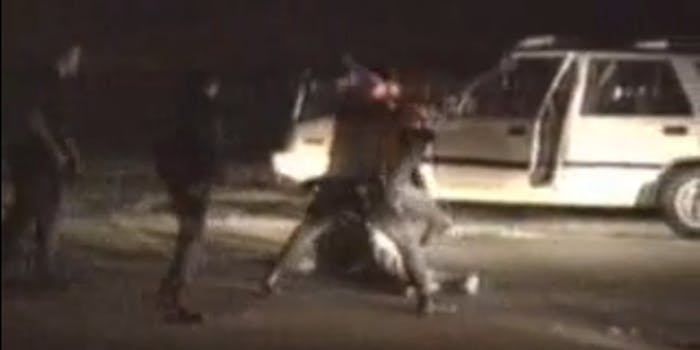 Rodney King and the viral video that changed a nation

The prevalence of videos similar to Rodney King’s today are actually a sign of social progress.

Twenty-five years ago today a recording taken on an analog video cassette tape became America’s first “viral” video, reshaping how we saw and confronted race relations, and birthed the hopeful, now historic plea from a battered and bruised African-American man: “Can’t we all just get along?”

Yet today America is still confronting the police brutality and systemic racism that still disproportionately harm people of color, and a lot of that ongoing struggle is due to the increased prevalence of videos similar to Rodney King’s across the Internet and television. People are now left to wonder about how much progress our society has made—and the technological impediments that previously prevented people from being able to record and widely disseminate similar instances of abuse.

On March 3, 1991, at around 12:30 a.m., George Holliday, a local resident, videotaped the beating of Rodney King by Los Angeles police officers at the intersection of Foothill Boulevard and Osborne Street. He recorded LAPD officers Laurence Powell and Timothy Wind repeatedly strike King with “power strokes,” while officer Stacey Koon stood back and gave the brutal directive. According to Koon, Powell and Wind, they employed a tactic of “bursts of power strokes, then backed off” and all the while they were aiming to “hit his joints, hit the wrists, hit his elbows, hit his knees, hit his ankles.” King was left with a fractured ankle, a fracture to his face and several bruises.

In 1991 it took two days and the assistance of a television station for Holliday’s video to see the light of day and go viral. Now we are all empowered to upload a video from our phone to the Internet in a matter of minutes.

On April 29, 1992—more than a year later—a jury acquitted the three officers of almost all charges to the shock and dismay of the American public including then-President George H. W. Bush. Later that night infuriated African-American residents of Los Angeles took their frustrations to the streets, and the now infamous L.A. Riots consumed the city for the next four days resulting in more than $1 billion in damages and 50 deaths.

And while America has not witnessed a riot of this scale for decades, we still find ourselves engulfed in a society that still struggles to adequately confront the violence and injustices that regularly befall our black citizens, sometimes at the hands of those sworn to protect them.

The late 1980s and early 1990s had artists like NWA and Ice-T decrying police brutality, and activists like Jesse Jackson standing up for African Americans. Today we have the Black Lives Matter movement, and artists like Beyonce, John Legend and countless others doing the same. But the Internet has added a new layer to activism as we face brutalities that we hoped had been confined to the past.

In 1991 it took two days and the assistance of a television station for Holliday’s video to see the light of day and go viral. Now we are all empowered to upload a video from our phone to the Internet in a matter of minutes. Once the video is on the Internet we can watch the video repeatedly at our own discretion, and are no longer beholden to the televised news to confront this information.

I can watch the shooting death of Walter Scott by North Charleston police officer Michael Slager as soon as it’s loaded, and whenever I choose to. I can watch the death of Eric Garner via strangulation by New York Police Officer Daniel Pantaleo just as easily. This list, unfortunately, could go on and on.

Still, 25 years later we are still a society that struggles to solve the same problems, even though we are now confronted with the imagery and videos of the problem far more regularly. This seismic cultural shift that was facilitated by the advent of the Internet can make it hard to gauge if our society is progressing, regressing or staying the same.

Still, 25 years later we are still a society that struggles to solve the same problems, even though we are now confronted with the imagery and videos of the problem far more regularly.

How many videos similar to Rodney King’s would have surfaced in the 1990s if all you needed was a phone and a wi-fi connection instead of expensive video recording equipment and the assistance of a television station to share the gruesome events?

We live in a world where videos and stories of police brutality are not hard to come by, but I also believe that we live in an environment that is safer than decades ago. A viral video from a quarter century ago displaying police brutality directed towards an unarmed African-American male shattered the consciousness of an American public that in many ways had remained ignorant and oblivious to many of the trials and tribulations of black life.

Videos of police brutality inflicted upon African Americans in the segregated South of the 1960s had a similar shattering effect upon the American psyche. Abraham Zapruder’s video the President John F. Kennedy’s assassination had a similar impact.

When there is a dearth of information, individuals and societies alike are charged with employing their imagination to fill the space created by their ignorance. The less you confront reality, the easier it is to replace the void with one’s idyllic or apocalyptic imagination. On average most people and societies prefer to err towards idyllic imaginations, yet this sadly leaves them susceptible to apocalyptic and fearful protestations because the ignorance still remains.

Rodney King’s video was a sudden jolt of reality that contradicted much of America’s idyllic imaginings. When the acquittals of the police officers were announced, our society displayed an inability to adequately address and adjudicate reality. African Americans, in kind, expressed their frustrations with American society’s unjust restrictions upon their lives—largely based upon ignorant imaginings that either discredit, disregard or ignore the plight of black life—by attempting to destroy the world around them.

The prevalence of videos similar to King’s today are actually a sign of social progress.

The prevalence of videos similar to King’s today are actually a sign of social progress. Harmonious visions are easier to live with, and can smother anxiety and negative emotions like a warm embrace, but the Internet makes this scenario less sustainable. Viral videos depicting abuses may shatter our comforting psyches and induce anxiety, fear, and negative emotions, but learning how to cope with reality instead of retreating to our imaginations is a sign of progress even if it is not comforting.

Progress has definitely been had in the ensuing years. We as a society are growing more comfortable with addressing the injustices of the past, and working to prevent their continuation into the future. Many people are still inclined to retreat into their idyllic imaginations, but accessibility of earth-shattering images, information and videos via the Internet makes it much harder for people to ignore the realities of today.

Twenty-five years later, we all might not be able to get along, but many more of us certainly do.