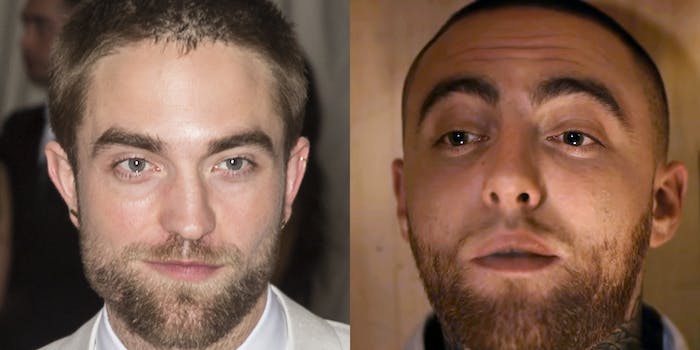 A 2016 Met Gala GIF is rousing the internet.

As the release of Christopher Nolan’s Tenet looms, the Robert Pattinson memes have started to circulate. So has a GIF of him at the 2016 Met Gala.

On Aug. 29, the Twitter account @ropbattinson, whose bio reads “unpaid tenet promo manager,” posted a GIF of Pattinson on the red carpet at the 2016 Met Gala, which he attended with then-girlfriend FKA Twigs. The tweet references his earrings, but more people pointed out that he looks like late singer Mac Miller.

This of course started a wave of requests that Pattinson play Miller, who passed away in September 2018, in any upcoming biopic. Others said this comparison was an “insult” to Miller, or that he looked like “evil Mac Miller.”

And then there was the opinion that there is a man who looks like this “in the checkout line buying a hot pickle” at the “nearest gas station.”

Is this some sly Tenet promo, like Tom Cruise attempted? Perhaps. But the GIF has also apparently convinced some people to see The Batman, too.

And then there was the thirst.

Curiously, no one mentioned the Twilight baseball scene.