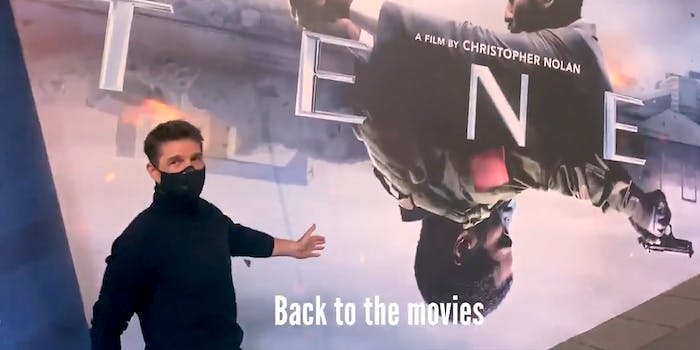 He's inviting us back to the movies as coronavirus cases continue to rise.

In recent years, Tom Cruise, one of the biggest action stars in the world, has gained something of a reputation of risking his own life to pull off increasingly dangerous stunts in the movies he stars in (lately, the Mission: Impossible franchise). But ahead of Tenet’s theatrical release, he’s executing what could be his most dangerous stunt yet—and not just for himself.

In a Twitter video that feels very much like sponcon (but isn’t marked as such), Cruise attends an early screening of Tenet in London, one of the first movies to debut amid theaters reopening several months into the COVID-19 pandemic. The video, which clocks in at 34 seconds, is a classic, enthusiastic Cruise. He takes a taxi through the city while wearing a mask with a valve, expressing surprise after a group of fans are still able to recognize him with the mask while in a taxi. Cruise is filmed sitting down to watch Tenet in a crowded movie theater, applauding both when the film started and after it ended.

“Great to be back in a movie theater, everyone,” he says after Tenet concludes, adding that he loved it when asked about his opinion.

As an actor, a lover of movies, and someone with a highly anticipated sequel set to be released in theaters later this year (assuming the pandemic doesn’t delay its release again), Cruise has plenty of reasons to be invested in getting people to return to the movie theater. But his publicity stunt—because that’s what his 34-second video basically boils down to—is a real head-scratcher. He’s wearing a mask with an exhalation valve on it, which the CDC has said doesn’t prevent wearers from potentially spreading COVID-19 to other people. While Cruise and the man sitting next to him are both wearing masks, none of the theater-goers around him seem to be wearing their own masks (although it’s unclear if they took them off to eat and drink or not wearing masks in general). From our view of the theater from Cruise’s seat, it’s also unclear just how much social distancing is taking place apart from Cruise and his seatmate. Nothing about Cruise’s trip to the movies feels safe. If anything, it feels downright idiotic and dangerous, especially as the number of COVID-19 cases rises in the U.K. In the U.S., it’s far worse with more than 5 million cases and 178,000 deaths to date.

After a summer of delays and director Christopher Nolan’s insistence that Tenet could help revitalize cinemas, Tenet is finally in theaters in two dozen countries including the U.K. with plans to expand its release in the coming days and weeks; the film opens in select cities in the U.S. on Sept. 3, with some theaters showing it as early as Aug. 31. Several theater chains reopening insist it’s safe to go to the movies again, and they’ve enacted protocols such as mask mandates inside the theater (except when eating and drinking), socially distanced reservations, and cleaning theaters after each screening to keep patrons safe. Medical experts, on the other hand, are advising people not to go to a movie theater.

Attending a movie involves spending several hours inside an enclosed room with complete strangers, and despite the mask mandates set in stone, you cannot guarantee that everyone in the theater will comply with new rules. Some people might take a mask off the second they’re seated while others may spend a good part of the movie without their masks eating and drinking (where most movie theaters make most of their money). And at some chains like Alamo Drafthouse, you have to click through a waiver acknowledging the potential risk of getting COVID-19 at the movies while also waiving your rights to hold them accountable if something happens to you before you can even buy a ticket. And that doesn’t even cover the potential health risks faced by the many theater employees who will have to navigate and enforce these new policies.

Tenet and New Mutants (which will be released Aug. 28 after years of delays, only some of which were pandemic-related) are now both at the center of a contentious debate about whether it’s safe to go to a movie theater right now. For film critics, it’s also an ethical issue: Should critics insist that people see a new movie in theaters (even if it’s the best way to see it) when going to the movies could be a major health risk? And if a studio doesn’t offer a safe way to screen that movie, should critics be risking their own health to see the film?

In Tenet’s case, Warner Bros. enacted protocols for socially distanced press screenings in open markets, but it didn’t offer a digital screener as an alternative; it’s also not screening in markets where theaters are still closed. Disney, which is releasing New Mutants after purchasing Fox, isn’t screening the film for critics at all, leaving those who planned to review the movie to see it in a theater with everyone else. In response, several outlets, including the AV Club, Roger Ebert, the Boston Globe, and Indiewire are refusing to review New Mutants and future films unless there’s a safe way for critics to watch them such as socially distanced press screenings or a digital screener.

Although some are pushing back because they believe critics are griping about not being able to see a movie for free, it has nothing to do with the cost of a ticket. Critics don’t feel that they can safely screen films in theaters, so they won’t potentially risk their lives for a review.

With Tenet, drive-in theaters aren’t even an option if you live in an area where theaters still haven’t opened. According to Variety, Warner Bros. isn’t offering the film in cities and states where there aren’t also open indoor theaters, which is the case in both my home state of New Jersey and my current home in New York; if I hypothetically wanted to see Tenet, I would have to cross state lines to do it, which I don’t feel safe doing.

“Back to the movies,” Cruise says in his publicity stunt video as he poses in front of the Tenet cutout. Considering just what might be at risk, it’s still a nonstarter.