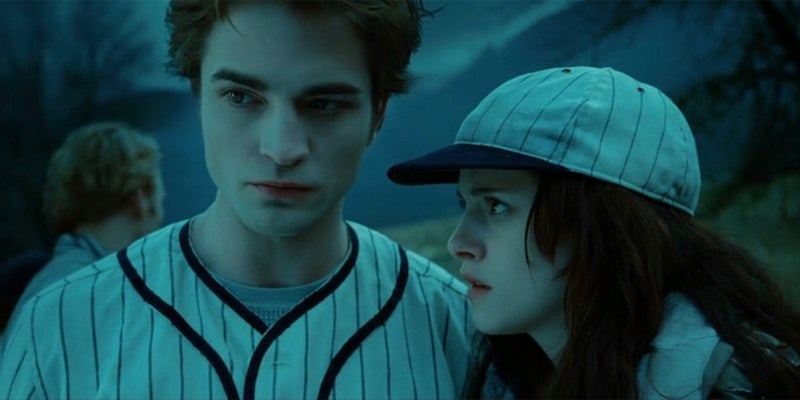 An ode to the vampire baseball scene in ‘Twilight’

This two-minute scene in 'Twilight' is a masterpiece.

The Twilight Saga is now streaming on Hulu, bringing the vampire romance that fans love—and love to hate—to a new platform. And while a masterpiece it is not, the first Twilight film contains what might be the series’ crowning achievement.

Released in 2008, Twilight often contains wooden acting and cringe-worthy dialogue, and its sequels aren’t much better in that department; all five of the Twilight movies are below 50% on Rotten Tomatoes. It’s launched countless think pieces about its message toward young girls and women, its role as Mormon propaganda, and its portrayal of unhealthy relationships. In the years since its publication, it inspired the Fifty Shades trilogy, E.L. James’ fanfiction turned (even more) controversial bestseller with its own box office hit. It’s long been used as a perennial punching bag with at least some of the vitriol toward Twilight and its largely female fanbase seeped in misogyny. To this day, Kristen Stewart and Robert Pattinson (the latter whose brand back in the day was to dunk on the series as he starred in it) still can’t get cast in a new movie without people objecting to it because of their performances in the Twilight Saga despite their respective indie careers in the years since. Ahead of Twilight’s 10th anniversary in 2018, as interest renewed in Twilight, director Catherine Hardwicke—who was thrown under the bus after the first film’s record-breaking success—revealed that Stephenie Meyer was resistant to diversifying the cast and objected to the idea of nonwhite actors playing any of the Cullens. Amid the COVID-19 pandemic, the series gained a bit of newfound relevance with Edward Cullen (Pattinson) himself, who was dying from influenza during the 1918 flu pandemic when Carlisle (Peter Facinelli) turned him into a vampire.

While Michael Sheen’s delightfully campy Aro is a sequel highlight and we often remember the series’ absurdities more than its sincerity, the first installment is the series’ standout. It was the only film of the series to be directed by a woman, it had a modest budget, and with so few expectations—because of the oft-disproven notion that people other than men will want to watch movies geared toward them—attached to it, its massive box office success came as a surprise. There are bright moments in Twilight amid its moody teen aesthetic, its eclectic and sparkly take on vampire lore, longing glances of Bella Swan (Stewart) and Edward toward each other, and their all-encompassing (but rather tame) love story. Even in its more dour moments, it has bright moments, often unintentionally so. But one scene encompasses that more than any other.

I am, of course, talking about vampire baseball.

Clocking in at around just over two minutes, Twilight’s vampire baseball scene, in which Edward takes Bella out to watch him and his family play baseball during a thunderstorm and is adapted from Meyer’s book, is iconic. It’s a scene that’s as bizarre as it is random, and it’s long been the utter fascination of fans and critics who love it; even people who’ve never seen Twilight know about vampire baseball.

It’s the kind of clip that, like Tom Holland’s Lip Sync Battle performance, I will pause just about whatever it is I’m doing and rewatch it. From a story perspective, it’s mostly irrelevant to the plot up until its final moments. I love it anyway.

One of the first things that immediately stand out in Twilight’s vampire baseball scene is its soundtrack. Around 35 seconds into the clip, Muse’s “Supermassive Black Hole” starts to play, which immediately (and briefly) turns Twilight into a stylized Muse music video set during a dark and stormy baseball game.

There’s no real rhyme or reason to the music choice, other than that it’s not out of step with the tone of the rest of the soundtrack or Meyer’s Twilight inspirations. With every new book in the Twilight series, Meyer released curated playlists—a blend of songs that she listened to while writing and songs that thought resonated with a particular character—for fans. She included 15 separate songs from Muse (her favorite band) while she wrote the initial Twilight Saga. While every book had at least one Muse song associated with it, the playlist for Eclipse features the most Muse songs at six; Midnight Sun, Twilight from Edward’s perspective, had one Muse song on its playlist. (And none of those songs are “Supermassive Black Hole.”)

“It wouldn’t feel like [Twilight] was based on something I did without Muse in it,” she told Rolling Stone in 2008.

Even years after Twilight’s impact has faded, “Supermassive Black Hole” still gets big cheers when it shows up during a Muse show, as I discovered when I saw the band perform it a couple of years ago as part of a larger concert.

How closely does this resemble real baseball? Who cares?

If you’re looking for a completely accurate portrayal of America’s pastime in the vampire teen movie that the cast compared to making an indie film before it became a box office hit, you might as well watch something else. Twilight’s vampire baseball scene is, above all else, an aesthetic choice. (I mean, the Cullens and Hales literally play during a thunderstorm, a time when anyone else would’ve long placed the tarp onto the field.) But it works despite how much it shouldn’t work.

“I remember thinking, on the page, ‘How are we going to make this look cool? How is this not going to be just B-movie camp?’” Jackson Rathbone, who played Jasper Hale, told Entertainment Weekly in 2018. “But luckily we were in the hands of an incredible cinematographer — and of course Catherine Hardwicke directed the hell out of it.”

The result is a bit of both. It’s not baseball as we know it. But with glimpses of vampiric superstrength, we get to see just how the many distinctive personalities of the Cullens and Hales mesh and clash with each other. And honestly, the cast looks like they had a lot of fun shooting it, which probably matters in a scene like this.

Yes, we can nitpick about how Alice Cullen (Ashley Greene) should probably have more than one pitch in her arsenal. Or point out some of the more eccentric actions like Jasper’s bat twirl, Emmett Cullen’s (Kellan Lutz) hand motions, Rosalie Hale’s (Nikki Reed) death stare at Bella for calling her out, or the many ways in which Edward’s family tries to one-up each other. We can even point out the impracticability of metal bats, although it’s probably the lesser of two evils when you incorporate how often wooden bats would break and splinter. In Edward’s case, you could argue that he’s showing off for Bella, but it’s also a rare glimpse at the Cullens and Hales as they are with one another, not how they act around a human they have to resist (to varying degrees) trying to eat and will have to spend the rest of the series trying to protect.

The random marriage of vampires and baseball doesn’t go unnoticed by Bella, who asks Edward “Since when do vampires like baseball?”. Edward mumbles something about it being the American pastime before pointing out the advantages of playing in a storm because they can get loud due to their strength.

Maybe they really are baseball fans; they even have their own custom hats. Maybe they just like having fun once in a while. But in a series where a bunch of immortal vampires keep repeating the same four years of high school in whatever town they live in, is playing baseball in a thunderstorm really that out there?

It’s the last time the Twilight Saga has fun

While there are humorous moments during the rest of the Twilight Saga (some of them more intentional than others), the films never quite hit the high of vampire baseball again.

In Twilight itself, vampire baseball leads to the arrival of the nomadic vampire trio of Laurent (Edi Gathegi), Victoria (Rachelle Lefevre), and James (Cam Gigandet), who kick off the third act when they catch a whiff of Bella’s blood. New Moon is largely defined by Bella’s depression after Edward breaks up with her and the proper introduction of Twilight’s love triangle, supernatural politics, and the Volturi’s deadline to turn Bella into a vampire. In Eclipse, a vengeful Victoria (now played by Bryce Dallas Howard) returns wanting blood after Edward killed James in Twilight. Breaking Dawn introduces the unintentionally horrifying Renesmée doll and culminates in a bloody battle that is predicted to happen—but ultimately doesn’t. It’s a lot, and a lot of your enjoyment depends on how invested you are in Bella and Edward’s love story.

Divorced from the rest of the Twilight Saga, vampire baseball is a very different thing entirely. It’s campy fun, and if Twilight had been more of that, it might’ve been more cult hit than phenomenon. Granted, Twilight ended up being incredibly successful and is beloved despite its criticisms. But in a series that, for some, is often devoid of bright spots, vampire baseball is a rare moment of levity that doesn’t need sparkles to shine.