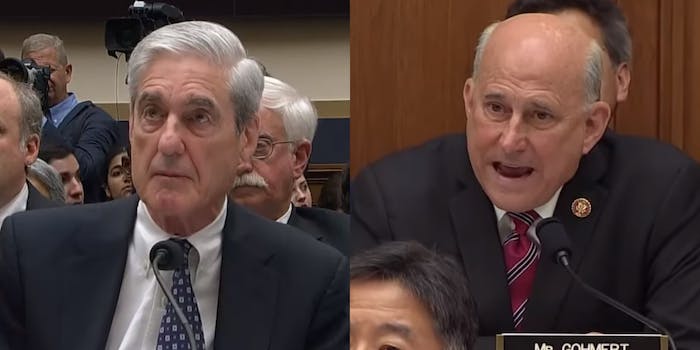 Mueller spawned a new meme with ‘I take your question’

It's clearly sassy, but what does it mean?!

On Wednesday, former special counsel Robert Mueller was testifying before congress about his investigation into Russia’s interference in the 2016 presidential election. Rep. Louie Gohmert (R-Texas) went on a particularly fiery rant at the end of his questioning session, saying:

If somebody knows they did not conspire with anybody from Russia to affect the election and they see the big justice department, with people that hate that person coming after them, and then a special counsel appointed who hires a dozen or more people who hate that person, and he knows he’s innocent! He’s not corruptly acting, in order to see that justice is done, what he’s doing is not obstructing justice, he is pursuing justice, and the fact that you ran it out 2 years means you perpetuated injustice.

Muller answered the tirade with the short, and somewhat perplexing, phrase “I take your question.”

Gohmert: "If somebody knows they did not conspire with anybody from Russia to affect the election & they see the big [DOJ] with people that hate that person coming after them…the fact that you ran it out 2 years means you perpetuated injustice."
Mueller: "I take your question." pic.twitter.com/buO4pqQ2bV

You might have noticed that Gohmert did not actually ask a question, and even if he had, what “I take your question” means is a little murky.

Is “I take your question” the new “bless your heart”? #MuellerTime

"I take your question" sounded a lot like … pic.twitter.com/cbalqYJm4h

I think the one thing this day has given us is "I take your question" as a way to respond to any question we don't want to respond to.

"I take your question" is the new "Bye Felicia."

"I take your question." pic.twitter.com/eRdvNQMiZr

Whatever the exact meaning may be, the phrase has now become a meme, and people plan to start incorporating it into their lives immediately.

My kid: YOU NEVER LET ME DO ANYTHING I WANNA DO WHY ARE YOU SO MEAN!??

Me: I take your question

HUSBAND/ACCOUNTANT: Have you done your billing for last month?

ME: I take your question

I am using “I take your question” every time someone yells at work.

EDITOR: Where is your story? It was due hours ago!

ME: I take your question

Officer: "Excuse me Mr. Hellman did you know how fast you were driving?"

Despite all the fire and fury, the testimony produced very little new information, and once again both Democrats and Republicans claimed to have won the day. The only things the American people really got out of the ordeal was this new sassy way to be dismissive, and Mueller at one point referring to the President as “Trimp”.

But you gotta take these small victories where you can get them.