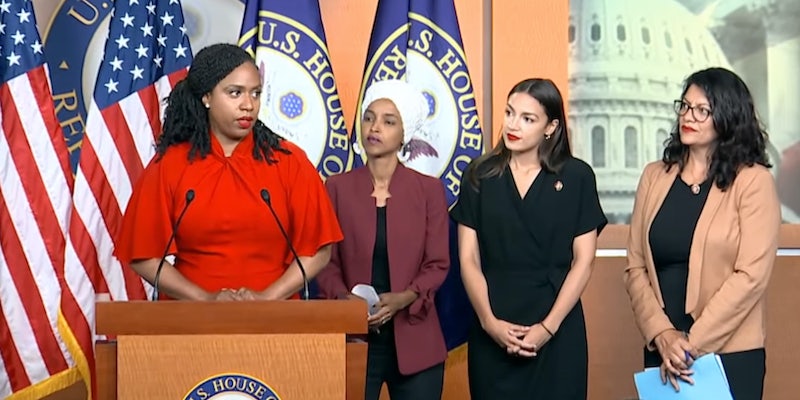 A Republican group in Illinois has deleted a meme it shared on its Facebook page that depicted four Democratic congresswomen and labeled them as the “Jihad Squad.”

The image, which was made to look like a movie poster, showed Rep. Alexandria Ocasio-Cortez (D-N.Y.), Rep. Ayanna Pressley (D-Mass.), Rep. Rashida Tlaib (D-Mich.), and Rep. Ilhan Omar (D-Minn.) and had the Illinois Republican group’s logo in the bottom right corner of it.

The four women, who have come to be known as “the squad,” have been targeted by President Donald Trump in recent weeks in racist tweets that were condemned by a House resolution.

“Political jihad is their game,” it says on the image. “If you don’t agree with their socialist ideology, you’re racist.”

It was posted by the Illinois Republican County Chairman’s Association on its Facebook page on Friday night, but has since been deleted, according to the Chicago Tribune.

This is on the Illinois Republican County Chairmen’s Association’s Facebook site: pic.twitter.com/0qzKsiRzzq

Mark Shaw, the association’s president, posted a statement on the Facebook page where he said the image was not authorized by him. He also apologized if “anyone who saw the image was offended by the contents.”

Shaw called the posting of the image an “unfortunate distraction from the serious debate surrounding the policies advocated by these four socialist members of the United States House of Representatives of which I strongly disagree.”

Tim Schneider, the chairman of the Illinois Republican Party, also condemned the image in a statement.

“I strongly condemn evoking race or religion as the basis for political disagreement. The recent social media post coming from the IRCCA does not reflect my values or the Illinois Republican Party’s values. Bigoted rhetoric greatly distracts from legitimate and important policy debates and further divides our nation,” Schneider wrote in a series of tweets.