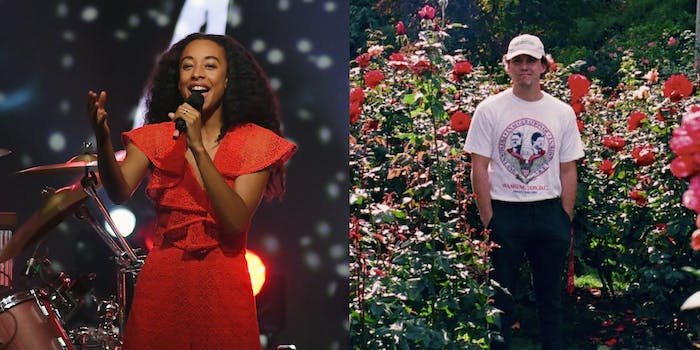 'Cut Corinne Bailey Rae her check and go sit in the corner and face the wall.'

Spend five minutes on TikTok and there’s a good chance you’ll come across a video soundtracked by Ritt Momney’s (no, that’s not a typo) viral cover of Corinne Bailey Rae’s 2006 hit “Put Your Records On.” Twenty-one-year-old Jack Rutter released the languid, reverb-soaked cover under his eye-catching stage moniker in April; it has since been used in more than 1.5 million TikToks and recently reached a new peak of No. 79 on the Billboard Hot 100, according to a recent Billboard feature on Ritt Momney titled “Ritt Momney Doesn’t Care If His ‘Put Your Records On’ Cover Is His Only Pop Hit.”

But not everybody is so impressed with Rutter’s Gen Z take on “Put Your Records On” or Billboard‘s choice of headline, as evidenced by the publication’s ratioed tweet from Friday. Amid the criticism, two chief complaints emerged. First, Ritt Momney is a terrible artist name. Second, and more importantly, the popularity of Ritt Momney’s “Put Your Records On” cover—and the ensuing media attention—erases the work of a Black female artist.

Bailey Rae, an English-born Black woman, sings of self-love and self-confidence on “Put Your Records On,” making several specific references to her natural hair with lines like “Just go ahead, let your hair down” and “Got to love that afro hairdo.” The singer explained via Genius, “I remember when I first started wearing [my hair] out and feeling self-conscious and people were making fun of me as well because it’s so different, and living in England, it was against what was considered to be a nice way to have your hair.”

To be fair, cover songs have been charting on the Billboard Hot 100 for nearly as long as the chart has existed, and plenty of covers have eclipsed the popularity of their source material. (Ritt Momney’s “Put Your Records On” cover has not done that thus far.) But Twitter users have still taken issue with the fact that Rutter, a white man, is now getting credit for re-popularizing a song written by a Black woman, for Black women.

“i hate that his cover gets played in the radio and not the original version that was written by a black woman,” @kanekislut tweeted.

“This white man who probably doesn’t wash his legs took a song from Corinne Bailey Rae and claimed it as his own,” @chidi_chidi_ wrote.

Even the Roots rapper and drummer Questlove joined the discourse, tweeting, “His name is what/why?” and later, “I might have to pass on this spoonerism.”

Other Twitter users sought to remind listeners that Bailey Rae wrote the original “Put Your Records On” and hoped she was getting royalties for the viral Ritt Momney version.

“Just a reminder: Corinne Bailey Rae wrote Put Your Records On. It’s about black girls loving their hair,” @leealvarado101 tweeted. “It was written for black girls by a black girl. Please for the love of GOD stop giving men credit for the work black women do it’s exhausting.”

@jdaphneblake was blunter: “cut corinne bailey rae her check and go sit in the corner and face the wall.”

Rutter, for his part, sounds like his heart was in the right place when he cut the track. He admitted he’s a huge fan of the Bailey Rae original, praising the caliber of songwriting and telling Billboard, “It has always been the epitome of a joyful, hopeful song for me.” He also encourages listeners to check out her version first on the YouTube audio for his cover. Both artists’ managers are also talking “in some capacity.”

There’s no word yet on whether Sen. Mitt Romney (R-Utah) has heard Ritt Momney’s cover.