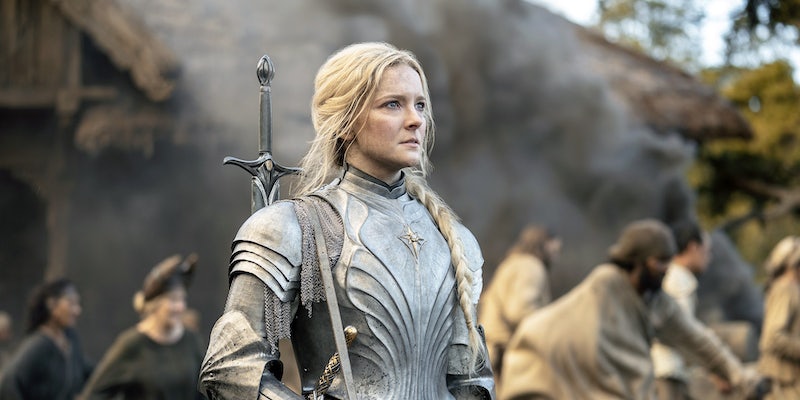 This action-packed episode is the best so far—but Galadriel's characterization is going in a puzzling direction.

This recap includes spoilers for The Rings of Power episode 6, “Udûn.”

Apparently what The Rings of Power really needed was more action sequences. So far, the show has unfolded at a rather leisurely pace—something that wouldn’t be a problem, if the writers spent their time more wisely. With a few welcome exceptions, most of the central relationships still feel underdeveloped, struggling to drum up much emotional investment. So episode 6 came as a pleasant surprise, focusing on the simple entertainment value of a cool battle scene—and connecting two of the main storylines, Galadriel/Númenor and the rise of the orcs.

Led by the mysterious Adar, the orcs are spreading across the Southlands, where Bronwyn’s human village has now split in two. Some chose to join the orcs and swear allegiance to Adar, while others agreed to stand and fight with Bronwyn and Arondir as their leaders. This sets the scene for a battle with Arondir as the main action hero, allowing Ismael Cruz Córdova to deliver some satisfyingly over-the-top elvish martial arts skills.

Directed by Charlotte Brändström (The Witcher; Outlander), this is our first real look at The Rings of Power‘s action style. While there’s a fair amount of orcish gore, the overall tone is more family-friendly than something like Game of Thrones, emphasizing fun stunts over extreme violence—albeit with a real sense of threat, because most of these human fighters are no match for an orc.

The meeting between Galadriel and Arondir is, it has to be said, a little abrupt. After setting sail last week, the Númenorean army arrives on Middle-earth so quickly that it feels like they teleported to Bronwyn’s village. What a happy coincidence that they arrived just in time to save this gaggle of narratively important strangers!

Galadriel’s forces—including Isildur and Halbrand, who is swiftly and ridiculously crowned king of the Southlands—make short work of the orcs. But not before one of the Sauron sympathizers steals Theo’s magic sword, which unlocks a dam in the mountains overhead, unleashing a catastrophic flood. In turn, this activates the volcanic core of Mount Doom, escalating things to a genuinely shocking degree. Judging by the episode’s final shot, Galadriel should now be fried to a crisp by the pyroclastic flow. But since she obviously won’t be, the more interesting question is where the show is going with her role as a “hero.”

Galadriel and Halbrand capture Adar during their battle with the orcs, allowing us to (finally!) learn some solid information about season 1’s lead villain. Apparently, he’s one of the first uruks—the elvish precursors to the less human-looking orcs—and he claims to have killed Sauron himself. He also seems to truly love the orcish army as his “children,” defending their individuality to Galadriel.

Even orcs have souls, argues Adar. “Your kind was a mistake,” Galadriel replies, disgusted. “I vow to eradicate every last one of you.” So Galadriel’s hatred of Sauron and Morgoth extends to an outright desire for genocide.

Galadriel’s characterization has been a major point of contention among Tolkienites watching this series. Even if we ignore the facile discourse around whether she qualifies as a Mary Sue, this version of Galadriel still feels like a big departure from what most fans would expect. Yes, Galadriel should be arrogant and morally ambiguous. But the show’s creative team chose to interpret this through the lens of violence and impetuousness, often making her seem far too immature and short-tempered. This conversation with Adar is a very direct “Who’s the real villain?” scene, and while the answer is obvious (definitely Adar!), I’m concerned that the show is already oversimplifying Galadriel’s moral ambiguity.

Even if you’re avoiding spoilers for future events in this era of Middle-earth canon, we know from The Lord of the Rings that Galadriel will learn to shy away from power, knowing that she can’t trust herself with the One Ring. The Rings of Power is clearly setting her up for some event where she “goes too far,” either in her quest for vengeance or in her arrogant command of mortal soldiers. But right now the show isn’t making a convincing argument for her appeal as a leader. Her superhuman qualities are mostly depicted through action and violence, rather than building up her image as a mystical, charismatic figure. Yes, she’s an impressive warrior. But what else?