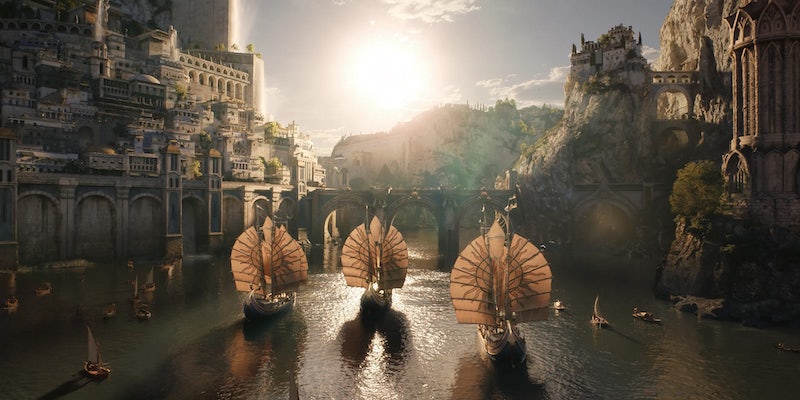 Is Sauron already in the show, disguised as a seemingly-unrelated character? It's possible!

This post includes spoiers for the first three episodes of The Rings of Power. (And some future speculation based on Tolkien lore.)

Sauron looms large in The Rings of Power. At this point in Middle-earth history, he’s lying low, but while most elves believe he’s dead, we (and Galadriel) know better. He’s just biding his time. The question is: When will he actually appear onscreen? And is he secretly there already, disguised as a different character?

Right now the most popular theory is that Galadriel’s mysterious pal Halbrand (Charlie Vickers) is Sauron, subverting his introduction as an Aragorn analogue.

In a show full of very straightforward characters, Halbrand is the most ambiguous and two-faced. Arriving in episode 2, he’s a human who meets Galadriel when they’re both lost in the Sundering Seas. After being rescued by sailors, they spend episode 3 in the kingdom of Númenor.

But while Galadriel alienates the locals by being arrogant and rude, Halbrand is charming and diplomatic, even befriending people who want to harass him. When he eventually creates a conflict he can’t resolve through smooth-talking, he displays impressively brutal combat skills—and is subsequently arrested.

Without going into too many spoilers, Tolkien lore dictates that Sauron has a key role to play in Númenor’s future. We also know that Sauron was at one point a beautiful man—and Halbrand is pretty good-looking and charismatic. Plus, while many fans assumed from the trailer that an actor named Anson Boon is playing Sauron, this was never actually confirmed.

The main argument against the Halbrand/Sauron theory is that Sauron already has a solid canon backstory during this era. Adopting the title “Annatar,” Sauron befriends the elven smith Celebrimbror under false pretences, ultimately helping to create the Rings of Power. That’s the backstory behind the One Ring. So he’s actually far more likely to show up in the Celebrimbor/Elrond subplot. (That being said, a lot of fans have pointed out that Halbrand claims to be a skilled blacksmith. Just like Sauron!)

There’s already a lot of pushback against this theory, with Tolkienites picking apart the evidence and essentially arguing that Halbrand is too obviously “human” to be Sauron. But before you assume that he’s just a random human… there’s already a conflicting theory that he’s a different important character:

Is Halbrand the Witch-King of Angmar?

Halbrand’s introduction drops some obvious hints that he’s not just some random peasant or soldier. Echoing Aragorn’s role as a secret heir to the throne, episode 3 suggests that Halbrand may be the rightful king of the Southlands, fleeing after his home was destroyed by orcs.

The most we know for sure is that Halbrand is a trained warrior with great people skills, and he wears a necklace representing the monarch of the Southlands. His deceptive nature means we can’t necessarily trust anything he says about his backstory. But if he is a king—or has ambitions to become one—then he could be one of the nine humans who later became the Nazgûl, the most important of whom is the Witch-King of Angmar.

The Nazgûl first appear in the Second Age (ie. when this show is set) and three of them originate in Númenor. So their origin story will probably play out during the show’s run, and Halbrand is a potential candidate.

The central theme of Tolkien’s work is that power corrupts, and since Halbrand is already a morally-ambiguous character, it’s easy to see why people are speculating about him becoming a villain. Of course, there’s still the possibility that he’s just a wholly original character. Which would probably be the smartest fake-out of all, considering fandom’s propensity for elaborate theories.