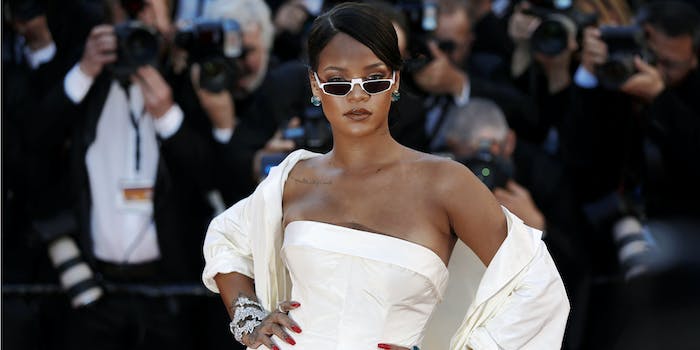 Four years after the launch of her cosmetics brand Fenty Beauty, Rihanna has officially become a billionaire. Forbes now estimates that she’s worth $1.7 billion, which makes her the wealthiest female musician in the world and the second richest female entertainer after Oprah Winfrey.

While some fans applaud the 33-year-old for being a self-made Black woman, others argue that there’s no such thing as a self-made billionaire.

Twitter user @rafiaproduces wrote, “You cannot ‘earn’ a billion dollars, you can only exploit, extract and wrongfully hoard this kind of wealth. Rihanna being a Black woman or the owner of Boohoo being a brown man being billionaires does not deserve praise. Capitalism with a brown or Black face isn’t progress.”

According to Forbes, the bulk of Rihanna’s fortune, which is an estimated $1.4 billion, came from the value of Fenty Beauty, of which she owns 50%. The rest comes from her stake in her lingerie company Savage X Fenty, worth an estimated $270 million, and her earnings as a chart-topping musician.

The “Love on the Brain” singer, who used to release an album almost every year, hasn’t released a new album since Anti in 2016. But apparently, that hasn’t mattered for her wallet.

In lieu of making music, she successfully capitalized on her social media presence to build her beauty brands. She frequently promotes her brands on Instagram, where she has 103 million followers.

Fenty Beauty and Savage X Fenty have received much attention over the years for their goal of inclusivity. Fenty Beauty products come in a range of diverse color shades while Savage X Fenty employs a uniquely diverse set of models.

Regardless, the premise of living like a billionaire doesn’t sit right with many leftists online. When Forbes announced Rihanna’s wealth, several other social media users called her out for “unethical” practices this week.

“I think the existence of billionaires is unethical. Wether it’s my good sis Rihanna or not, billionaires should not exist,” Twitter user @MONR0WE said.

User @_azryah said that it’s unethical because it necessitates a lack of inequity while so much of the world is living in poverty.

Several folks accused Rihanna of exploiting others on her journey to becoming a billionaire.

“Rich people will exploit others to get richer,” user @MphoMoalamedi tweeted, citing unverified rumors of influencers who say they were paid for promoting the brand in “exposure.” The Daily Dot could not find evidence to corroborate that accusation.

Another user claims that “Rihanna exploits child slaves in India” just “like every other billionaire.”

Earlier this year, Fenty Beauty faced backlash following allegations of using child labor in India. This came during the same month that she tweeted about the farmers’ protests in India.

Rihanna’s rise to becoming a billionaire was hard for some fans to swallow. They insisted that even “the hottest bitch to ever live” shouldn’t have that much money.