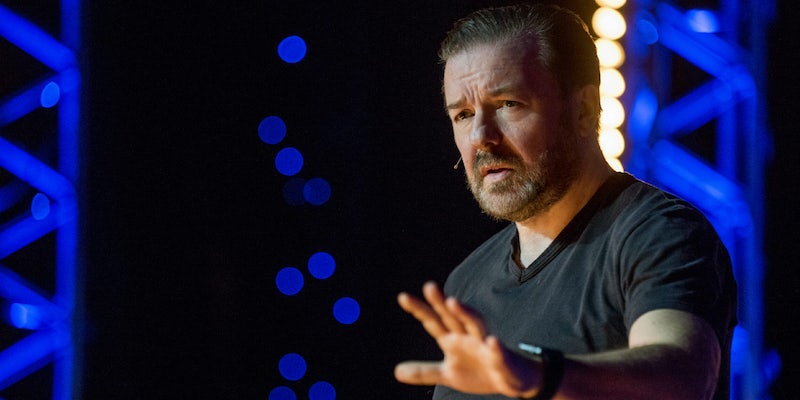 Are you offended? Let Ricky Gervais tell you why you shouldn't be.

There’s an AIDS joke in the first five minutes of Ricky Gervais’ first Netflix special, Humanity. And it sets the table for the next hour.

Humanity, which Gervais toured, is the first of two standup specials Netflix is releasing, and the overarching theme is the epidemic of offense. Gervais hears both sides, telling jokes that might offend, in an effort to gauge the room, and then expanding on why people have a right to be offended. Flanked by a skull podium, he jokes about scaring his girlfriend with increasingly offensive Golden Globes jokes before he hosted in 2016, and uses that to segue into an examination of a Caitlyn Jenner joke that got him in trouble that year. He explains that it wasn’t transphobic; it was about a celebrity killing someone with their car and suffering no repercussions.

There are some parallels with Dave Chappelle looking back on his trans jokes in his latest special, with the comedian admitting he’s not sorry that he told the joke, but he’s sorry it hurt someone. Gervais states several times that his offense was “dead-naming” Jenner—using her old name—and he takes some responsibility for that offense, but also deconstructs the original joke in an effort to justify it.

Gervais’ specials have always been more like TED Talks, and Humanity is no different. He’s not telling quick-fire jokes, he’s sitting with them. There are some times where the momentum drops, like a bit about the backlash he got for a nut allergy joke. He gets more serious when he talks about freedom of speech and breaks down how people on social media want to be angry about comments but not deal with their own issues. If you’re someone who works online all day, there’s a shade of truth there, but at times during Humanity it feels like Gervais is just calling out random Twitter trolls and not necessarily looking deeper at his own issues.

He goes further with the joke deconstruction and shares the “stupidest” tweet he ever got, in response to a comment about age of the planet. Gervais points out the irony of a creationist who tweeted that he can’t wait to see him in hell getting raped by Satan and then sets up a reality where that actually happens.

Humanity‘s deconstruction of offense is a bit uneven, but for his encore (yes, encore), Gervais offers what might be its mission statement: “You can laugh at bad things without being bad people.”