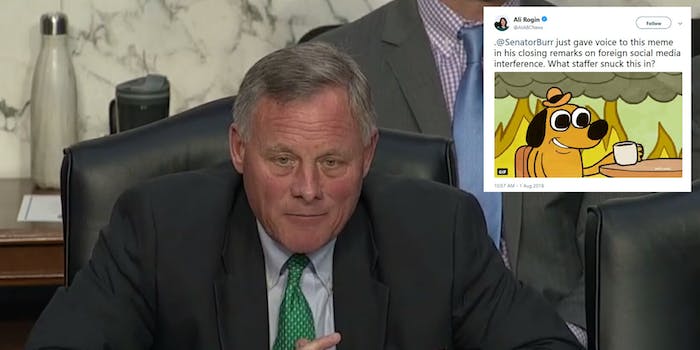 Sen. Richard Burr (R-N.C.) referenced a popular meme on Wednesday during a Senate Intelligence Committee hearing on the use of social media “influence operations” by foreign countries.

During his remarks, Burr used the “This Is Fine” meme—which depicts a cartoon dog sipping coffee in a room that is on fire and saying “this is fine”—to describe the current state of interference by other countries on Americans online. The topic has become the subject of Congressional inquiries since it was determined that Russia sowed discord on social media ahead of the 2016 election to influence voters.

“Some feel that we as society are sitting in a burning room, calmly drinking a cup of coffee, telling ourselves this is fine,” he said, adding: “We should no longer be talking about if the Russians attempted to interfere with American society. They’ve been doing it since the days of the Soviet Union, and they’re still doing it today.”

Referencing internet meme, Sen. Richard Burr says of Russian interference efforts: "Some feel that we as a society are sitting in a burning room, calmly drinking a cup of coffee, telling ourselves 'this is fine.' That's not fine." https://t.co/Yr9SwxBwyk pic.twitter.com/w4VUPRMWWi

Burr also referenced the announcement from Facebook earlier this week where the company said it found “inauthentic” accounts that were similar to the ones used by the Internet Research Agency (IRA), a Russian “troll farm” that posted things on Facebook and Instagram meant to incite discord among American voters ahead of the 2016 election.

The senator told those in attendance that the “influence operations” are continuing.

“Nothing underscores that face more than yesterday’s announcement by Facebook that they’ve identified over 30 new accounts that are not only causing chaos in the virtual domain, but also creating events on our streets with real Americans unknowingly participating,” he said. “These cyberactors are using social media platforms to spread disinformation, provoke societal conflict and undermine public faith in democratic institutions.”

However, Burr’s reference to the “This Is Fine” meme caught people’s attention.

.@SenatorBurr just gave voice to this meme in his closing remarks on foreign social media interference. What staffer snuck this in? pic.twitter.com/7CYea1owG3

I, too, am more than a little skeptical that Richard Burr — who still drives a 1973 VW Thing around Washington — knew of this meme. https://t.co/dXQy39YQe5

At least the senator’s reference of the meme was better than the GOP’s attempt in 2016 to bash Hillary Clinton.