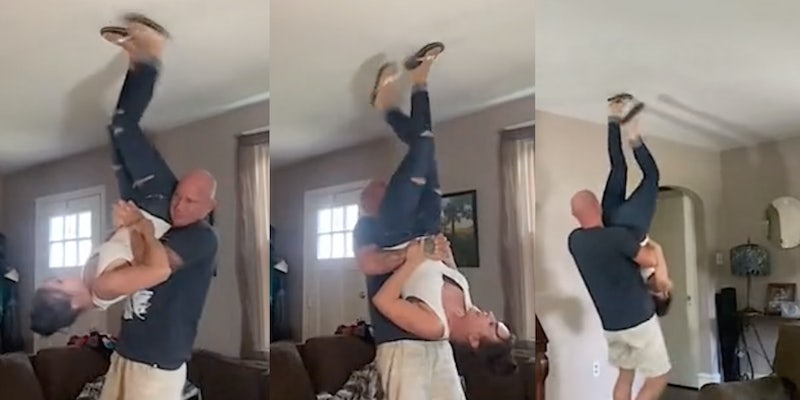 TikTokers have the pettiest revenge for their loud upstairs neighbors

'Upstairs neighbors kept us up all night so now it's our turn.'

Noisy neighbors are an unfortunate but expected part of apartment living.

Upstairs neighbors, in particular, have a reputation for being unreasonably loud at only the most inconvenient times. There is no shortage of people who’d absolutely love to get a small dose of revenge against a noisy upstairs neighbor, but few would do so with the hilarious zeal of TikTok couple @mav_n_mandii.

The TikTok duo uploaded a video to their shared page in mid-August, displaying their creative method of revenge against their upstairs neighbors. Noting, via text overlay, that their “upstairs neighbors” kept the couple “up all night,” they brilliantly flip the script.

An all-too-brief video sees their revenge play out. Mav, holding Mandi upside down with a firm grip around her waist, walks around the couple’s living room. The entire time, Mandi makes a performance out of stomping her feet across the ceiling. She’s wearing shoes, of course—it wouldn’t be nearly so petty if she was barefoot—though the couple stopped short of outfitting her in a pair of high heels, which everyone knows are the ultimate tool of the loud upstairs neighbor. Instead, she shuffles and stomps her flip-flop-adorned feet across the ceiling in a genuinely inspired method of retribution.

The video is one of the most popular of Mav and Mandi’s page, with more than 4.7 million views and thousands of comments. Viewers were galvanized by the couple’s brilliant reversal, and many promised to initiate their own, slightly altered, versions of the revenge. Suggestions recommended adding “tap shoes” to the mix for maximum results, though the majority of commenters seemed to recognize that they didn’t have the required strength to carry a whole human, upside down, around their apartment. For those without muscles the size of Mav’s, a broom can do the trick, but it certainly won’t look as good.

Following repeated requests to flip the video around, Mav and Mandi followed their video with a second upload. The new video, which has more than 60,000 views, displays the same scene but upside down. As promised by commenters, the flipped video is even more gratifying. Mandi appears to be carrying Mav as she tip-taps her way around the apartment, resulting in a video that is almost certain to make you smile.

Past jokes about footprints on the ceiling and other, even pettier potential additions—like adding music to the mix—most people simply shared their respect for the couple’s creativity. Its not the easiest revenge to replicate, but it’ll certainly get your upstairs neighbor’s attention.

Mav and Mandi could not be reached via TikTok direct message.