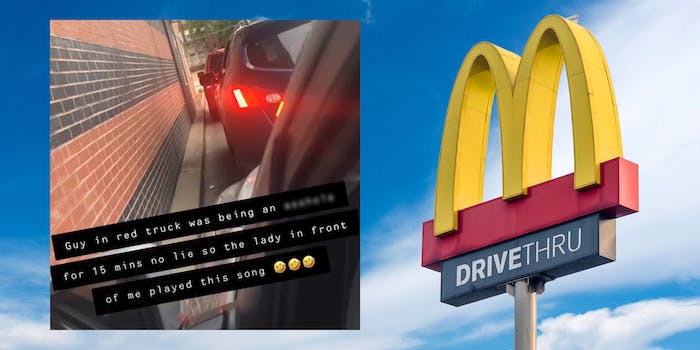 'Not all heroes wear capes.'

A viral TikTok video shows a woman getting some revenge on an alleged rude customer in a McDonald’s drive-thru by playing aggro-rap classic “Move Bitch” by Ludacris at the highest volume possible.

TikToker @chasityrodriguez93 posted the video, which has been seen 872,000 times on the platform. The caption reads: “Red truck being a Karen, woman in front of us wasn’t having it. I love it here.”

In the overlay, she wrote: “Guy in red truck being an asshole for 15 mins no lie, so the lady in front played this song.”

The brief TikTok video shows three vehicles in a row, with Rodriguez filming the scene: the playing of Ludacris’ 2001 hit song “Move Bitch” is blaring from the middle car and apparently aimed at the red pickup at the window.

While it’s unclear what exactly the so-called Karen did, Rodriguez replied to a comment to clarify that the incident “actually had nothing to do with the workers and more to do with him being a dumbass.”

Commenters loved the unseen woman’s pettiness, with one writing it was “the kind of passive aggressive I stand by.”

“Not all heroes wear capes,” wrote another commenter.

The Daily Dot has reached out to Rodriguez for additional comment.