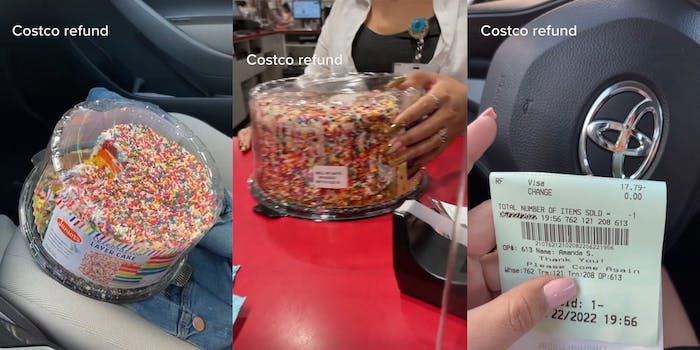 Returning food to the grocery store because it doesn’t taste the way a customer expected may sound odd, but with a store like Costco, everything is possible.

In the video posted by @generationalchange on TikTok, she returns a rainbow cake that she says tastes like masa, a corn flour used to make items like tamales.

“I’m on my way to return this disgusting cake that I got at Costco,” the TikToker says. “To be honest, I’m a bit embarrassed, because I don’t ever return grocery products. This is my first time. But shoot, for $17.79, you best believe I’m dragging my ass over to Costco and asking for a refund.”

Bulk retailer Costco has a 100% satisfaction guarantee, with a few exceptions for items like electronics, diamonds, cigarettes, alcohol. Under this guarantee, most items can be returned within 90 days for a full refund with a receipt.

In the video, when @generationalchange returns the cake, a cashier asks what is wrong with the cake, to which she says it was “not good at all.”

“So they gave us the money back,” she says. “I was a bit surprised that she asked me what was wrong with it, but I told her it wasn’t good at all. I got my money back, I was a bit embarrassed. I’ve never done this before.”

Some commenters felt that returning the cake due to its taste was a step too far, urging the shopper to “take your L.”

“Hell no, I would never,” one commenter wrote. “I could understand if it was spoiled but just because you don’t like the taste, nah.”

“Omg noooooo I could never…for that reason?” another commenter wrote. “Yeah no you should be embarrassed…so many things I don’t like, but oh well, just don’t buy again.”

Others, however, encouraged the woman, claiming there’s nothing to be embarrassed about.

“Never be ashamed of that, that’s some extra money you can save for your family,” one commenter wrote.

“I would’ve been embarrassed before inflation but fast forward to now…hell nah!” another said. “Kudos to you girl! Times are tough!”

“I don’t know why people are tripping, this is a big company,” one user said. “Go get your money back if you don’t like it you shouldn’t have to keep it.”

The Daily Dot has reached out to @generationalchange via TikTok comment as well as to Costco via its media contact form.