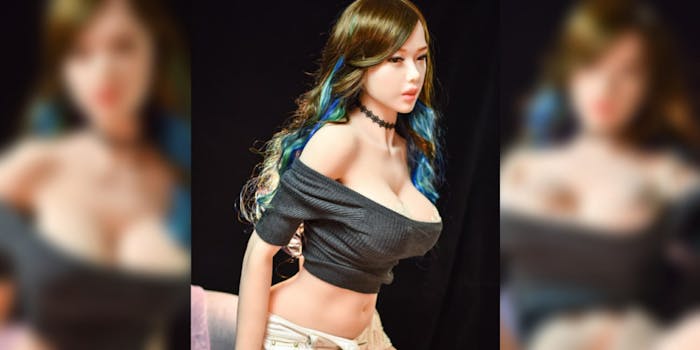 Some of the dolls are pretty racist too.

Sex Doll Official offers premium sex dolls to purchase, rent, or customize to your heart’s desire. While ordering a pre-made sex doll can cost as much as £1,895 pounds (or approximately $2,483 USD), the site’s stock dolls can be rented out for £345 per week (or around $452 USD), and users can even customize their own dolls and provide specific details like hair color, eye color, and scars. This includes orders for replicas of customers’ dead partners, among other things.

The business is run by 35-year-old Jade Stanley, who came up with the idea after reading an article about the sex doll industry. She realized most sex doll manufacturers were “offering the dolls in a more sexualized way” that was “quite seedy,” so she decided to open a sex doll business for people who are “seeking comfort” after a partner’s death.

“We have a lot of people approach us who have dolls made that resemble a partner they have lost,” Stanley told the Sun. “It can be very beneficial for them and helps them keep a piece of their loved one, it provides them with comfort, and people don’t always buy the dolls for a sordid reason.” Stanley also says her dolls can help couples who want to experiment with a third person, socially anxious people learning how to navigate sex, and individuals who suffer from mental health concerns that make socializing difficult.

Of course, Twitter is having a field day with the idea.

Is there a late fee? Cleaning Fee? WE NEED ANSWERS.. pic.twitter.com/JwyCkaqSAa

Sex Doll Rental Refurbishment Technicians. Must be able to work with strong chemicals. Competitive pay and employee discounts on rentals. Candidates with no actual life will be strongly considered.

Very handy if she was made of rubber with a fixed expression. https://t.co/NBVCOCfshl via @nypost

Bad things to rent include plastic molds of your dead wife that you ejaculate into.https://t.co/mimNOCU2Tr

There’s a need for tender sex dolls in the world, for sure. But Sex Doll Official has some problems with its business model.

For one, there’s the racist stereotypes running rampant across the site with its dolls of color. A Black doll named “Brandy” promises to take buyers to “the depths of sexual darkness,” and a Latina doll named “Flame” is described as “red hot and full of sinful lust.” Another one, a Black woman in leopard lingerie named “Destiny,” is described as the “queen of the night.” Then there’s “Keiko”, which Sex Doll Official describes as a “seductive Asian nymphet” that is a “hard working frisky individual.” Yikes. The dolls’ descriptions clearly fall into a much larger problem with racism in sexual preferences, which cannot be separated from the site’s customization options.

Not just that, but grieving partners need time to mourn, and giving widows and widowers the opportunity to recreate their late partner in plastic can leave them stuck in the five stages of grief without any way out. Twitter has since ruled the entire concept “seriously fucked up.”

I was LOLing at this story but this is seriously fucked up. I saw my Uncle widowed and this is messing with people’s mental health by making them less likely to complete stages of grief and acceptance. pic.twitter.com/ZugwSHhjx5

The whole premise is eerily similar to the Black Mirror episode Be Right Back, which tackles losing a loved one and recreating them with artificial intelligence.

Life imitating art. Someone watched the episode and immediately started a business plan.

It might be time to create a keyboard shortcut for "Yeah, we saw this episode of Black Mirror and things did not turn out so great" https://t.co/b3sR5ULc4K