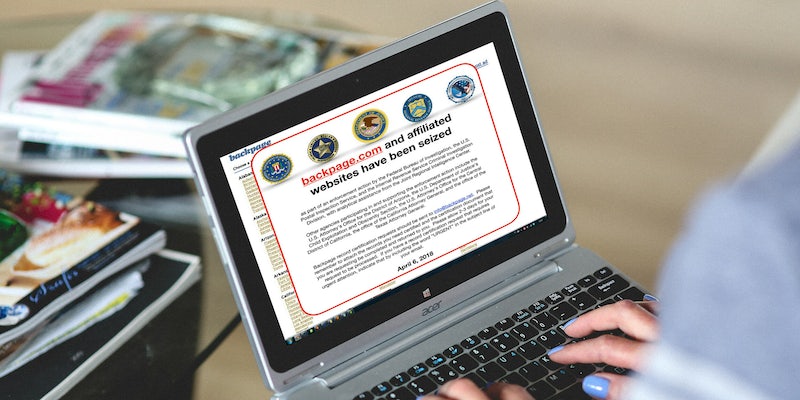 What is Backpage, and why did it shut down?

With Backpage gone, the internet's future is uncertain.

If you try to access Backpage today, you’ll be met by an ominous message: “Backpage.com and affiliated websites have been seized.”

Clicking on the image will bring you to a press release from the U.S. Department of Justice, dated April 9, which announces the site’s seizure for “including ads depicting the prostitution of children.” Alongside the alleged advertisements, the Justice Department writes that seven Backpage executives were charged in a 93-count federal indictment linked to the site.

For those who have never used Backpage before, the site has become increasingly relevant in a war on sex workers and the internet, after the anti-“sex-trafficking” law SESTA-FOSTA was passed by the U.S. Senate. But most internet users know very little about the site—and its role in the internet’s future.

Backpage is a classified ads service similar to Craigslist. Before its seizure, the site allowed users from around the world to sell goods and services online, from apartments to electronics. However, Backpage was most prominently known for its adult ads.

Like Craigslist, users could use Backpage to hook up. But Backpage featured ads from sex workers—more specifically escorts—so clients could easily connect with providers. Still, the site wasn’t just popular for sexual services. Backpage was also considered an incredibly important resource because it let sex workers screen clients before engaging in work.

In one case, a Michigan woman who goes by Sarah Fenix used to use Backpage to make sure her clients were real people. This was usually done by asking them to text their favorite movie or bring her food. She expected the client to follow through on the request while meeting face-to-face.

“The guys who could follow that one simple instruction were actually better than the ones who couldn’t,” Fenix told the Arizona Republic. “It’s not necessarily about the information you get, it’s about gauging someone’s willingness to follow instruction.”

However, Backpage has long been called a “sex-trafficking platform” by opponents, including U.S. Senator Kamala Harris. But it remains unclear how accurate that statement truly is. As Salon’s Noah Berlatsky argues, most human trafficking happens outside of sex work altogether, and those forced into sex trafficking often do so because they need basic needs, like food and shelter. Others are trafficked due to domestic abuse, suggesting larger social issues play into sex trafficking beyond Backpage’s existence.

Why is Backpage so important?

Backpage plays a major role in the internet’s future because its existence is closely tied to the Communications Decency Act.

When Backpage first faced allegations that the site profited off sex trafficking, the site’s attorneys defended the company by repeatedly deferring to the Communications Decency Act. Under Section 230, “no provider or user of an interactive computer service shall be treated as the publisher or speaker of any information provided by another information content provider.” This means that services like Backpages could not be charged for online users posting criminal content on certain sites, like ads for prostitution, which is largely illegal across the U.S.

Of course, SESTA-FOSTA struck a major blow to this defense by stripping away protections for any content related to sex trafficking. This means any website found with sex-trafficking advertisements could be charged with “facilitating” sex trafficking and face criminal prosecution. The law has had a chilling effect as a result: Craigslist shut down its personals section, Reddit cracked down on multiple subreddits for sex workers, and Wix allegedly began removing sex workers’ websites.

Without screening sites like Reddit and Backpage, SESTA-FOSTA forces sex workers back onto the streets where pimps and other predators may exploit them.

“Pimps seem to be coming out of the woodwork since this all happened,” Laura LeMoon, the founder behind a harm reduction nonprofit called Safe Night Access Project Seattle, explained to Motherboard. “They’re taking advantage of the situation sex workers are in. This is why I say FOSTA-SESTA have actually increased trafficking.”

Backpage CEO Carel Ferrer was arrested in October 2016 on allegations that the site profited from sex-trafficking ads featuring children and adults. Then, a U.S. Senate committee concluded in early January 2017 that the website “knowingly concealed evidence of criminality by systematically editing its ‘adult’ ads'” and that the site “facilitates prostitution and child sex trafficking.” Backpage pulled its adult ads section from the site in response.

Initially, it seemed the Communications Decency Act would protect Backpage amid the charges. But in July 2017, the Washington Post obtained documents that suggest Backpage purposefully hired a company in the Philippines to solicit adult ads on the site. By early April 2018, Ferrer pleaded guilty to money laundering and conspiracy to facilitate prostitution charges. He then agreed to testify against Backpage co-founders Michael Lacey and James Larkin. Seven Backpage officials have since been arrested on charges of conspiracy, money laundering, and facilitating prostitution as part of the 93-count indictment mentioned in Backpage’s seizure.

Backpage’s founders face a January 2020 trial as all seven continue to plead not guilty against the indictment. Meanwhile, an anti-“sex-trafficking” group named Florida Abolitionist has since expanded a lawsuit to include a complaint against Backpage,  alleging the site engaged in racketeering.

What are some Backpage alternatives?

No matter how Backpage’s legal issues continue, it seems unlikely that the website will return.  As part of Ferrer’s guilty plea in Sacramento, he agreed to remove every Backpage website in a five-day span. He also agreed to forfeit Backpage domains within 14 days. A federal indictment plans to seize dozens of assets related to Backpage, including various website domains attached to the service. However, there are some Backpage alternatives out there for sex workers to use.

While Eros and HarlotHub provide a classifieds service similar to Backpage, Switter offers one of the best social media experiences for sex work. Powered by Mastodon, an open-source alternative to Twitter, Switter has over 80,000 users between sex workers, their clients, and their allies. The site lets sex workers freely and openly communicate with each other. Plus, Switter has its own listing system where escorts can offer incall and outcall services, models can sell access to their Snapchat, or adult performers can advertise custom clips.

Switter certainly doesn’t feature the extensive classification and location system that Backpage introduced and Eros uses. However, it’s one of the best resources for meeting sex workers online by far thanks to its community-building features. The site is moving to its own content delivery network, too. Hopefully, this assures that the Mastodon network isn’t targeted by the U.S. government any time soon.