The guidelines were created by moderators tuber and jij to try and cut down on trolling, blog spam, cheap content, and, most importantly to give the 5-year-old community some much needed guidance. It comes just a week after r/Atheism’s founder was removed for inactivity.

“Originally /r/atheism was essentially un-moderated,” the two guards of the godless stated in a blog post on the new policy. “However, due to [r/Atheism founder] /u/skeen never responding to questions or giving feedback, it was requested to the admins by jij that he be removed as a moderated in this request. … With skeen removed, tuber and jij discussed via chat and decided that the absolutely-no-moderation policy was no longer effective.”

The one guideline the community has latched onto in particular and gravely misunderstood is regarding image sharing. Since the beginning, r/Atheism prided itself on being free and open, relying on Reddit’s public voting system to determine what content reaches the community’s front page and potentially Reddit’s front page. (As a default subreddit with more than 2 million readers, all new registered Reddit users are automatically subscribed to the forum.)

Without any guidance over the years, r/Atheism has been nearly overrun with posts featuring direct links to macro images like these: 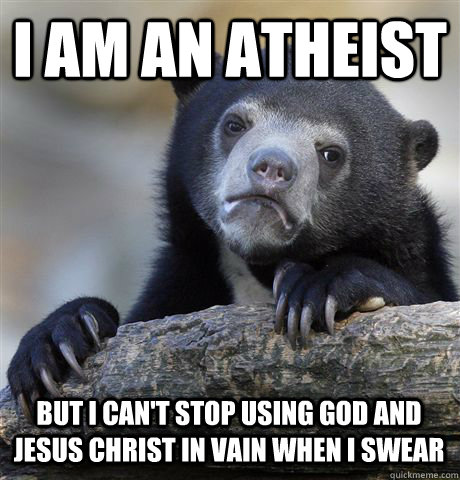 r/Atheism image macros quickly became the butt of the joke elsewhere. Schadenfreude subreddits r/cringe and r/cringepics devoted themselves to digging up the best of r/Atheism, like this gem by a teenager who warns, “I’m not a professional ‘quote maker.’”

It’s become a recurring joke, even on r/Atheism. “Links to images or image-only content (imgur or image blogs) are disallowed as direct links—instead please submit these as self-posts and put the links within the self-post content,” the new guideline states. “This policy is in attempt to allow relevant images while cutting down on what are essentially karma whoring and cheap content posts.”

This new rule has caused an uproar around r/Atheism, where more than 25 separate posts claim that the new guidelines are a form of censorship. A poll found that 49 percent of users despised the new rules, claiming they lost their voice and that r/Atheism was “no longer an open forum.”

Yet through all of the noise, a handful of redditors have actually read the guidelines and believe they are a step in the right direction.

You can still post image macros. You just won’t get karma for it. “Your macros and quickmemes have to be posted in self posts,” festizian commented. “Doesn’t say that they’re banned. All you have to do is push the little plus button next to the self post, then push the little camera plus to see your memes. Cuts down on karma whoring and reposts that get highly upvoted. … As long as this moderation is done with a light hand, as opposed heavy handed or skeen ‘none at all,’ I doubt you’ll see much difference, and the subreddit will continue to thrive and grow.”