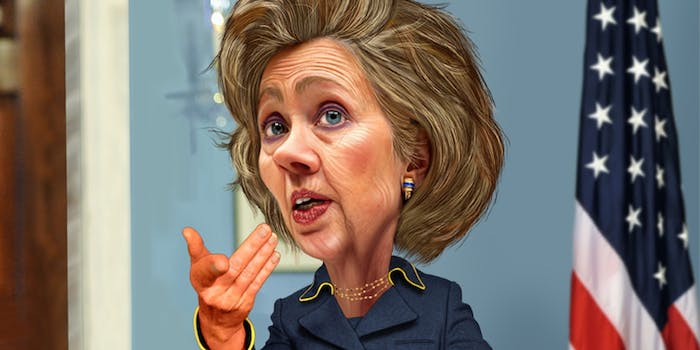 Six years ago, sexism in the media was instrumental in denying Hillary Clinton the Democratic presidential nomination. Thanks to the growth of online feminism, however, the media may be her salvation in 2016.

In an interview with Politico on Monday, Sen. Rand Paul (R-KY) took a nervy swipe at Hillary Clinton’s age by commenting that a presidential campaign is “a very taxing undertaking to go through.” He said, “It’s a rigorous physical ordeal.” If nominated in 2016, Clinton will be 69 years old on Election Day.

First, the most obvious point: Paul is either being historically oblivious or deliberately hypocritical. When Paul’s own father sought the Republican nomination in 2008 and 2012, the Texas congressman was already in his seventies (73 and 77). Perhaps more relevant, GOP beau ideal Ronald Reagan was also 69 when he was first elected in 1980.

Republicans have nominated a septuagenarian in three of the eight presidential election since that landmark contest—Ronald Reagan in 1984, Bob Dole in 1996, and John McCain in 2008 (aged 73, 73, and 72 respectively)—and a candidate less than half a dozen years younger than Clinton circa 2016 three more times (George H. W. Bush in 1988 and 1992 and Mitt Romney in 2012). Any sound age-based case against a Clinton candidacy two years hence would redound against Paul’s own party. If he isn’t already aware of this, he should be.

Of course, the insinuations about Clinton’s age are as much about sexism as old fashioned ageism, and it is here that Paul and his conservative cohorts are out-of-step not only with their Democratic opponents, but the state of American politics in the post-Internet era.

The United States was a different country when Clinton’s conservative opponents employed age-based sexism against her during the 2008 campaign, from Michelle Malkin’s comment that the Senator’s “face of experience” would “scare away a lot of those independent voters that are on the fence” to Rush Limbaugh rhetorically asking: “Will this country want to actually watch a woman get older before their eyes on a daily basis?”

Although Clinton certainly tapped into progressivism’s well-known feminist undercurrents in her primary battle against Barack Obama that year, there was nothing on par with the rise of Internet feminism over the past half-decade.

2012 seemed to be the watershed year for the online women’s rights movement. In February, the breast cancer charity Susan G. Komen for the Cure reversed its decision to defund Planned Parenthood (a decision that would have deprived it of $600,000 in grants for cancer screenings for low-income women) after an online protest campaign led to over 1.3 million critical tweets and innumerable negative Facebook, Tumblr, and message board comments.

A few weeks later, a similar online outcry against a proposed transvaginal ultrasound mandate in Virginia led the staunchly anti-abortion Gov. Bob McDonnell to amend the measure. Later that year, when Limbaugh made misogynistic comments about public contraception insurance advocate Sandra Fluke on his radio program, an orchestrated campaign to boycott companies that advertised on his program compelled him to apologize for his remarks.

The influence of Internet feminism also had a direct impact on electoral politics. As liberals drew increasing attention to what they claimed was a Republican war on women (including in a viral Obama campaign ad that cited an article by this author for PolicyMic), it became increasingly difficult for prominent GOP candidates to sweep sexist gaffes under the rug. Senate races in Missouri and Indiana, in which Republicans had been strongly favored, ultimately went Democratic—thanks to the backlash against GOP nominees Todd Akin and Richard Mourdock for insensitive remarks about rape and abortion.

By the end of the year, Tom Watson of Tech President was able to write that “networked feminism” had emerged as “a tenacious, super-wired coalition… prepared at a moment’s notice to blow the lid off sexist attacks or regressive health policy.”

It is true that recent manifestations of online feminism haven’t focused as much on electoral politics. Thanks to Gamergate, increased attention has been paid to cultural issues like the harassment faced by women who write online or the general subject of cyberbullying (most recently posed, ironically enough, by Monica Lewinsky).

The campaign against rape culture has also recently occupied the attention of the feminist blogosphere, as has the need to react to the misogynistic violence of the men’s rights movement (which tragically manifested itself earlier this year in a school shooting motivated, not coincidentally, by a participant in the online gender wars).

Combined with the role of low turnout in enabling the Republican victory in last week’s midterm elections—which can be blamed as much on feminists as any other segment of the progressive coalition that turned out in droves for Obama in 2008 and 2012 while staying home in 2010 and 2014—and one could be forgiven for thinking that the ageist sexism of Rand Paul might fly under the radar in 2016.

This is highly unlikely. After all, as has already been established, Clinton’s 2008 presidential campaign contributed to the record turnout and unprecedented mobilization that made her such a formidable challenger to Obama in that year’s Democratic primaries. Given the massive lead she has consistently held over all of her potential rivals (her closest challenger, Vice President Joe Biden, is behind her by a five-to-one margin—64 percent to 13 percent), it seems safe to assume that that base remains intact and waiting to be galvanized by the heady possibility of electing one of the early 21st century’s most iconic politicians as America’s first female president. In such a climate, the antennae of Internet feminism will be even more attuned to the undercurrents of sexism that might attempt to quelch this moment.

Regardless of one’s political leanings or personal feelings toward Hillary Clinton, it’s hard to argue that this won’t be a positive development. Should a woman receive the Democratic presidential nomination (the most likely female alternative to Clinton, Sen. Elizabeth Warren, will be 67), it will be all too easy for conservatives to use gendered attacks as a means of discrediting her and thus being elected by appealing to the worst impulses in American politics. It would be particularly tragic if, less than a decade after America elected its first black president, it was established that gender could still be used to keep a woman out of the White House.

For those who believe Clinton shouldn’t be president, Internet feminists are their allies precisely because they will force the election to be based on the content of her character and policies, nothing else. For those who want her to be elected, they will be the chief vanguard keeping coded chauvinism like Rand Paul’s in check.