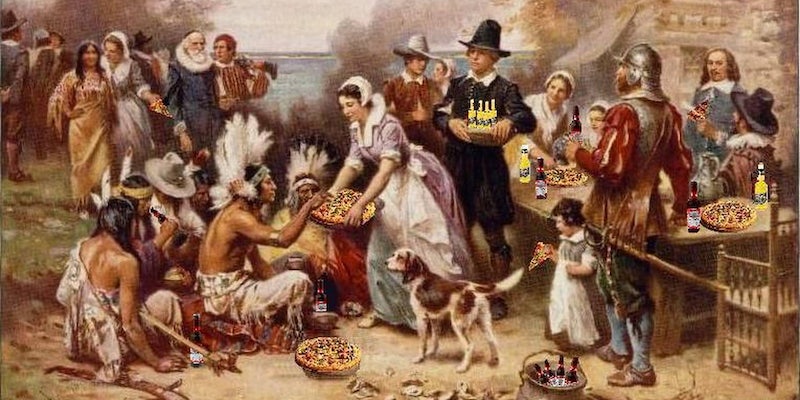 No one wants to talk politics on Thanksgiving, but here's what to do if it comes up.

Earlier this week, on Tuesday, November 25th, a grand jury in Ferguson, Mo., made the decision not to charge white police officer Darren Wilson for the killing of unarmed black teenager Michael Brown, in a tragically unsurprising turn of events. In much less important news, this week is also Thanksgiving.

As the outcome of Tuesday’s grand jury decision proves, white people in this country have a lot to be thankful for this year. However, chances are some of your family members might not see it that way. They might even believe the opposite to be true and hold a completely different interpretation of the Ferguson situation than someone like yourself (you surely being a compassionate, intelligent person) does. Or, to put it another way, Bobby Moynihan’s closed-minded, racist, noxiously conservative Drunk Uncle is one of the most resonant characters to emerge on Saturday Night Live in the last few years for a reason.

Here are a few tips to help you get through the conversation without losing it. You can even make it into a bingo game! 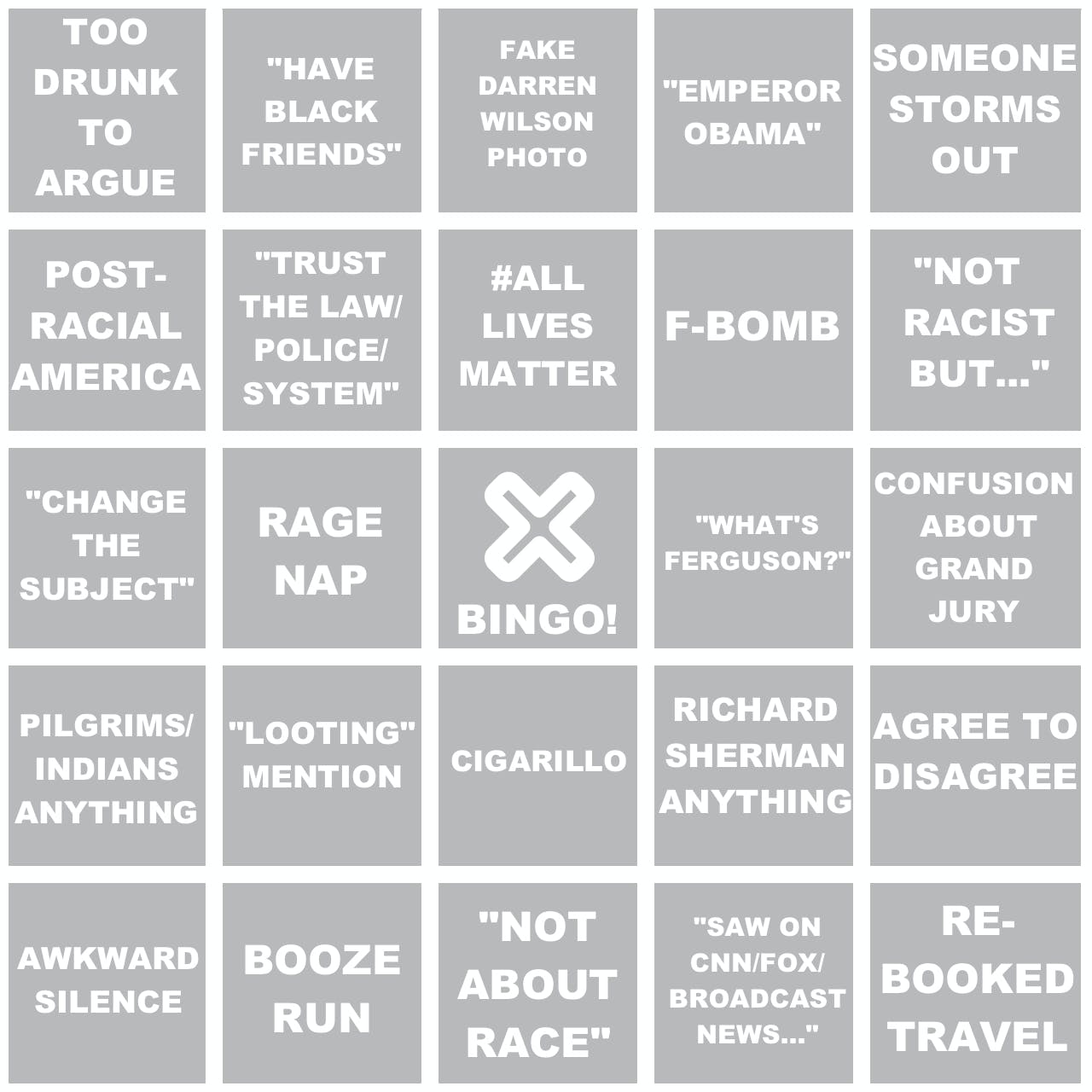 We’re all intelligent people here. The main thing you have going for you if Ferguson comes up on Thanksgiving, which your more Fox News-friendly family members don’t, is that you know what you’re talking about.

Moreover, you know that black people are 50 percent more likely to be incarcerated for drug crimes, even though there are more white drug users in America overall. You know that minorities are more likely to be targeted by police officers than white people, and that officers rarely get punished for accusations of misconduct. And you know this despite the fact that police are notoriously close-lipped about revealing shooting statistics.

Knowing all that, what could any of your relatives possibly say to throw you off in a discussion about Ferguson? Not that winning an argument should be the point of making yourself more informed. Still, when it comes to talking with your less knowledgeable family members, the facts will only help make your point.

2. Be ready for a lot of false logic.

Meanwhile, expect your relatives to counter with their own version of the facts, which of course won’t really be facts at all.

For instance, say that one of your family members decides to compare the Ferguson case to the O.J. Simpson trial. Say they pontificate on how while both matters were racially charged, white people didn’t riot after the Simpson verdict—a disparity the Internet has already been keen to point out.

Except that, as the Daily Dot’s Matt Rozsa recently observed, these two cases are actually nothing alike. “O. J. Simpson didn’t allegedly kill Nicole Brown Simpson and Ron Goldman because they were white but over matters related to his personal life. Indeed, in terms of underlying social issues, the alleged Simpson murders—heinous though they were—had far more to do with misogyny (Simpson had reportedly abused Nicole Brown when they were married) than racism,” writes Rozsa.

Moving on, say that another one of your relatives complains about how there is just as much “reverse racism” towards white people in this country as there is any other kind of racism, and that black people don’t actually have it harder in this regard. In which case you say, “Okay, Uncle Ted, but you can’t really argue that racism has been used to systematically oppress white people and keep them down for hundreds of years in the same way.”

For some excellent commentary on this, you might also look to a bit on reverse racism from Australian comedian Aamer Rahman that went viral earlier this year. In it, Rahman muses:

I think there is such a thing as reverse racism… I could be a reverse racist, if I wanted to, all I would need would be a time machine, right? And what I’d do is I’d get in my time machine, I’d go back in time to before Europe colonized the world, right? And I’d convince the leaders of Africa, Asia, the Middle East, Central and South America to, uh, invade and colonize Europe, right? Just occupy them, steal their land, resources; set up some kind of like, I don’t know, trans Asian slave trade where we exported white people to work on giant rice plantations in China, just ruin Europe over the course off a couple centuries so, all their descendants would want to migrate out and live in places where black and brown people come from.

But of course, in that time, I’d make sure I set up systems that privilege black and brown people at every conceivable social, political and economic opportunity, and white people would never have any hope of real self-determination. Just every couple of decades make up some fake war as an excuse to go and bomb them back to the Stone Age and say it’s for their own good because their culture’s inferior. And then just for kicks, subject white people to colored standards of beauty so they end up hating the color of their own skin, eyes and hair. And if, after hundreds and hundreds and hundreds of years of that, I got up on stage and said, ‘Hey, what’s the deal with white people? Why can’t they dance?’, that would be reverse racism.

Obviously, false logic is annoying, but it’s also everywhere. And if you can deal with it everyday on your Facebook news feed, you should be able to handle it in real life, too.

Everyone has had a few moments over the holidays where they got so mad they wanted to chuck their plate across the room. Maybe a few of us have even done just that. It’s no secret that family gatherings can be a source of stress and pressure. Spending exorbitant amounts of time with people who lead completely different lives and have completely different perspectives isn’t easy. That’s not to say it isn’t worth it, but there are those years where a family member has said or done something that just made us want to storm out in a fit of rage. And perhaps we made them want to lose it, too, at one point or another.

This all becomes that much more amplified when politics are involved. A friendly discussion about what neighborhood you’re living in can quickly turn into a screaming match on gentrification, if you’re not careful.

But you don’t want to be the person who “ruins” Thanksgiving. Let that be someone else—or, preferably, help stop this from happening at all. Bullet Media’s Luke O’Neil makes a convincing case for just holding back entirely. “You might think you’re doing a good deed by patiently explaining to Nana why her views are outdated, or to your father about how Fox News has been slowly and steadily poisoning him like a sadistic nurse with an IV of political potassium chloride,” he writes, “but no one in the history of political arguments has ever, once, even come close to having their eyes opened by some hasty talking points farted out from across the gravy bowl.”

Look, in most cases, talking to your extended family about politics is about as fun and as useful as punching yourself in the face. At the very least, if you do jump into the fray, keep in mind that taking the higher ground also means keeping a level head. Sure, you can go toe to toe with your racist step-dad, but the minute you start yelling at him, the rest of your family will think you’re no better than he is (though you probably are). Plus, you’ll hurt your mom’s feelings, or someone else’s, if you give into the temptation to go berzerk.

There’s a difference between debating and fighting, and if you express your points calmly and rationally, you’ll automatically look that much more mature (which your parents will be pleased about! Yay!) Don’t follow family members down the rabbit hole who want to bait you into getting worked up.

4. But if you have to blow up, do so responsibly.

There is a time for polite discussion and a time for righteous anger. Coming into Thanksgiving, one certainly hopes for the former rather than the latter; righteous anger doesn’t tend to go well with cranberry sauce, after all. But there are moments when we have to speak up, even and especially to our own family members.

White people have to understand that any amount of suffering they’ve encountered in their own lives is most likely dwarfed by the weekly, sometimes daily amount that people of other skin colors continue to face in America. Similarly, you shouldn’t think yourself a hero for outlining the basic points of why Ferguson is a tragedy to your family, if the topic comes up. But if things do get ugly, you shouldn’t feel bad for telling someone they’re wrong either.

5. Remember that just because you love someone, it doesn’t mean you can’t disagree with them.

It’s unlikely you’re going to change anyone’s opinions overnight. If Grandpa Joe has been a racist for the last 70 years, chances are he’s not going to reconsider his opinions sometime within the next few. But that doesn’t mean you shouldn’t try.

You can love your grandma, your cousin, your niece, your whoever, despite their personal prejudices. But if you give them a pass because of those prejudices, you’re doing them, yourself, and everyone else a disservice. It might be easier to say, “Well, Aunt Trudy did make a hate-filled remark about Barack Obama, but I don’t want to rock the boat.” Sometimes though, rocking the boat is the right thing to do. No one ever changes their opinion without being told they’re wrong.

If Ferguson does come up at your Thanksgiving celebration, stick by your principles, above all else. You may have not seen your extended family in a long time. You may not have even seen your immediate family in a long time. But any family remembers who truly love and care about you will also respect your opinion. Holiday arguments can get heated quickly, and they don’t always resolve easily. There’s not necessarily occasion to speak up at every little comment you disagree with. However, enough of those little comments, and it only becomes appropriate to say something. If you can be outspoken and honest, without severing relationships, then call the holiday a win.

There’s enough racism inherent in Thanksgiving already. Don’t let Ferguson be an excuse for any more.

Photo via inafrenzy/Flickr (CC BY 2.0)