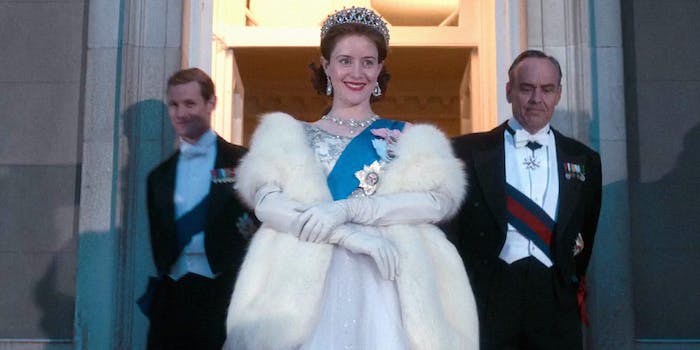 Screengrab via A Delicate Matter/Netflix

The Netflix drama received the royal seal of approval.

Queen Elizabeth II watched Netflix’s The Crown–a biopic about her life–and loved it, according to a royal source.

U.K. tabloid the Sunday Express shared the news on Sunday and said the Queen watched all 10 episodes of the series, which portrays her early life. The first season follows her rise to power, her marriage, and the lives of her family.

“Now I can disclose that [Her Majesty] has watched all 10 episodes of the series, having been encouraged to do so by her son and daughter-in-law, the Earl and Countess of Wessex,” the article said, “who arranged for Saturday night viewing sessions in the sovereign’s private apartments at Windsor Castle.”

Apparently, the Queen and her son have a longstanding arrangement that they all get together to have dinner on the weekends and watch TV.

“Happily, she really liked it,” the article said. “Although obviously there were some depictions of events that she found too heavily dramatised.”

The Queen’s perspective that the show over-dramatizes aspects of her life may only grow in season two. According to series creator Peter Morgan, the show’s second season will feature Prince Philip having an affair–which was a source of much speculation throughout the Fifties, when the next season will be set.

Other members of the Royal Family are also fans of the series. Princess Eugenie and Zara Tindall, the Queen’s granddaughter, have all expressed positive remarks about the show. “The music is wonderful; the story is beautiful and you feel very proud to watch it,” Princess Eugenie said.

The Netflix show–which recently took the crown as the most expensive TV series of all time–just finished filming season two and may return in November.