The Internet has fallen hard for this photogenic ‘prison bae’

All hail the Khaleesi of the Hood.

Every once in a while, you see someone with heart-stopping good looks. In a mugshot. On the Internet. First there was “fine felon” Jeremy Meeks, then “cute mugshot girl” Alyssa Bathrick.

And in the year of our lord 2016, we’ve been blessed with a new alleged offender to covet: Meet #prisonbae. 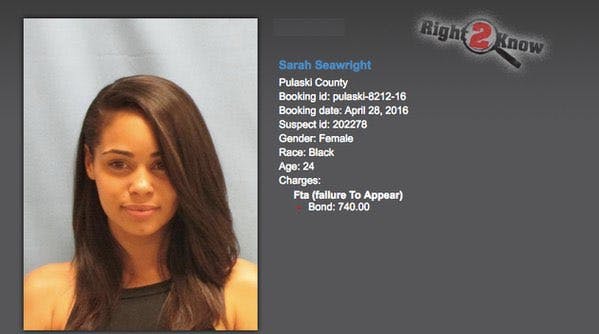 Sarah Seawright, 24, is facing charges of failure to appear in connection with a reckless driving incident. In 2012, she was charged with a long list of crimes—aggravated robbery, first degree battery, kidnapping, hindering arrest, and tampering with evidence—all stemming from the same incident, in which she allegedly picked up and helped rob a man in a parking lot.

According to Arkansas court records, Seawright was only found guilty of one charge—hindering arrest—for which she was sentenced to 60 months probation. But it’s the mugshot from her most recent arrest that has hearts racing and has drawn comparisons to Game of Thrones queen Emilia Clarke:

Seawright is out on bond right now, and trying to parlay her viral #prisonbae fame into something more. On Twitter, she says she’d love to go on the Wendy Williams Show, and on Instagram, she lists contact info for bookings (professional, not criminal) in her bio. Could Prison Bae follow the Fine Felon into the modeling industry? It’s 2016, so… probably.

In the meantime, every dude on the internet seems to be swooning over her.

Her: Empty your pockets and get on the floor
Me: Bet…*takes pants off and lies on the floor* #PrisonBae pic.twitter.com/stvYO0Wtsa

Good luck with that, gents. The Hood Daenerys doesn’t need a man. She was last seen on Snapchat cooking a big breakfast and running a stack of cash through a bill-counting machine.