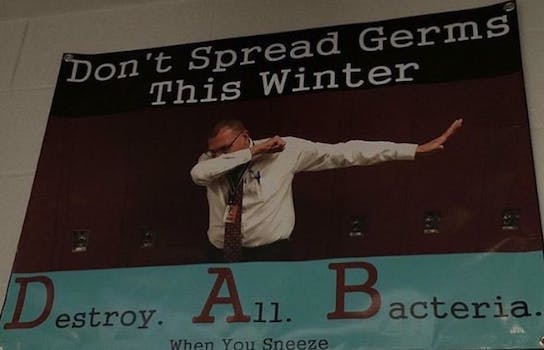 Principal to students: Dab on ’em when you sneeze

When a U.S. congressman’s teen son awkwardly dabbed in a photo with Speaker of the House Paul Ryan this week, the remaining Americans who still didn’t know what a “dab” was quickly found out. It is not, as Ryan impatiently suggested, a sneeze. But the relationship between dabbing and sneezing makes a lot of sense to one high school principal, who’s suggested that kids hit the dab to keep germs from spreading. 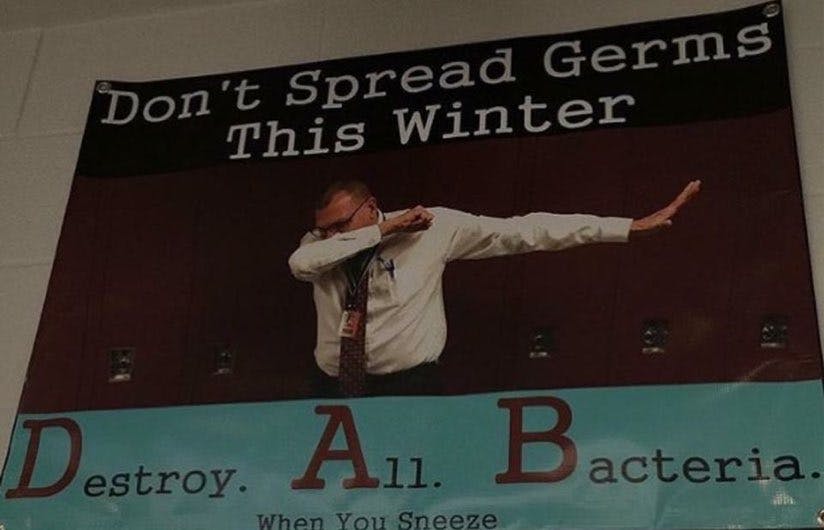 Newark, Ohio, principal Tom Bowman’s “Destroy All Bacteria, Dab When You Sneeze” poster first hit the internet about a month ago, but Bowman is finally getting due credit this week thanks to articles in Parenting and the local Newark Advocate. The Ryan incident probably didn’t hurt, either.

Bowman got the idea from Alex Kovach, a technology integration specialist at the high school who said he started hitting the dab when he sneezed, and it made his students laugh.

Thanks to Kovach and Bowman (and a popular dance co-opted from black culture) the long-accepted practice of sneezing into one’s arm to prevent the spread of germs is now… kind of cool? Or at least, it’s the kind of failed attempt at cool that kids appreciate.

So do grown-up health authorities, like the California Department of Public Health and Ohio State University, who have both contacted Bowman about spreading the dab campaign, according to Parenting.

Congratulations to Principal Bowman for trying to reach kids with a pop culture reference from the current decade. That’s sick, dude. As sick as your high schoolers aren’t now that you’ve dabbed on ’em.