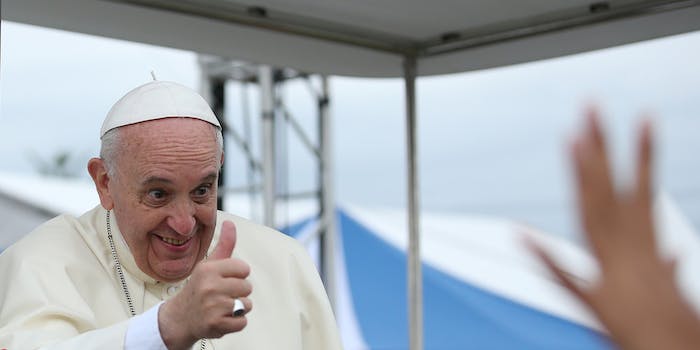 Pope Francis cannot pick up a microphone without looking like he is about to drop some bomb rhymes.

It’s impossible to not see it the second you look at one of the pictures. The Pope holds his mic like a rapper.

His psalms are sweaty, knees weak, cross is heavy pic.twitter.com/fswDx2yQ4I

It’s so obvious that anyone who has ever seen a rap video (e.g. probably not the Pope) can recognize it immediately.

This, of course, has led to Twitter having a field day, imagining the fire and brimstone that the Most Holy Father might be spitting. On Saturday, flying home from Cairo, he spoke to reporters about the increasingly tense relationship between the United States and North Korea.

It’s a serious situation, and one Pope Francis said could lead to the destruction of “a good part of humanity.”

Buuuuuuut, that picture is too perfect to be left alone. It literally looks like his boys are holding him back in the middle of a fierce rap battle.

Pope: "oh shiiiiiiit….Microphone check one two what is this, the pope of the Francisus with the roughneck business-" pic.twitter.com/NuQLiEaOSQ

"Allow me to reintroduce myself my name is POPE
P to the O-P(E)
I still save souls, call me goalie
From the devil, this flight is now holy" pic.twitter.com/Yn1HWv4JMV

Got bored at work today. Pope held his mic like an MC about to lay down sick bars. This was the result. #poperaps #amnewsers #borededitor pic.twitter.com/mfgddPU5B3

Vatican is my city
Never seen a titty
But I still spit fire
Drop Psalms like bombs
And prayers mad witty pic.twitter.com/92ZbqEjUaF

Don't keep me waiting
Never catch me hating
Only preach one diss track
So hit the play button, Satan pic.twitter.com/OPEnxgy8vh

Bishop of Rome
God blowing up my phone
Got your girl on her knees
For confessions not dome pic.twitter.com/rwU5mekdfL

Water always holy
The Spirit on tap
Sinners always tripping
Till I give 'em a slap pic.twitter.com/4jYaPmyN98

Back like a resurrection
King of the church, no election
Swipe right for forgiveness
JC the selection pic.twitter.com/RZo056HRwM

Okay technically the Pope is elected, but we’ll let it slide.

Some call me Pope
Others know I'm Frank
Blood of Christ got me leaning
Bread of heaven always dank pic.twitter.com/4FcOkKqHky

Run the church so long
Got two Testaments
Rap game so raw
Had to give it up for lent pic.twitter.com/ohIQJnt6tI

If you come stepping
The name's His Holiness
Sinners skipping Mass
Pearly gates is what you'll miss pic.twitter.com/0my2by62fC

Pope Francis has shown himself to be a man with a good sense of humor, so he probably wouldn’t be offended by any of this but, if you have the time, he’d probably appreciate you actually taking a few minutes out of your day to meditate about ways to prevent World War III for rizzle.