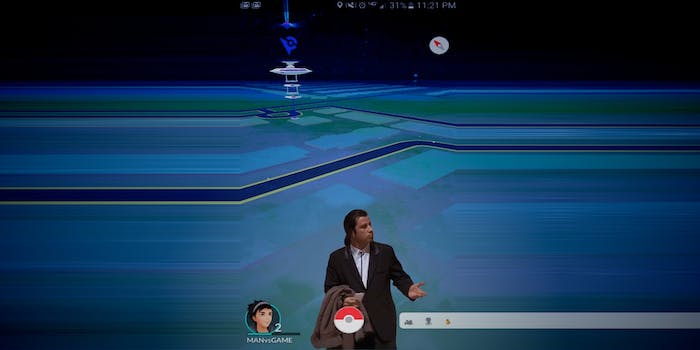 The Pokémon Go memes are already here, and they’re spectacular

If, on your way to work this morning, you see a man staring raptly into his phone while casing the outer rim of your local Dunkin Donuts, it’s highly likely that he’s chasing a Pokémon.

These are gorgeous words we never thought we’d utter in real life. But thanks to the U.S. release of Pokémon Go on Wednesday, the world has a whole new luster. A Charizard could be waiting on the hood of your car, or a Rattatta might be nestled in your desk plant. Your office cafeteria could be a Pokémon gym. And if you have a really cool boss, you might have to battle her Cubone in order to take control of it. Is this real life?

And what happens when you put the rabble of the internet into the real world with (sort of) real Pokémon? Memes, of course.

#PokemonGO got me wandering around my neighborhood like pic.twitter.com/yCcsOs7rNH

Damn I see you #PokemonGO pic.twitter.com/TnV5Thbmrx

After an entire weekend of playing #PokemonGO pic.twitter.com/ZAgPOyS8n5

the best part of pokemon go is definitely when you get to name then pic.twitter.com/efu953h5yo

When there's a Pikachu outside but it's 1 AM and you have strict parents #PokemonGO #pokemon pic.twitter.com/BgiXGkZMpK

All this creative loljuice—just in the first 24 hours! But since the game is quickly becoming notorious for its intense battery-draining powers, you have to snap quick and choose wisely. It’s total despair to try to think of dank memes when you’re chained to a power outlet.