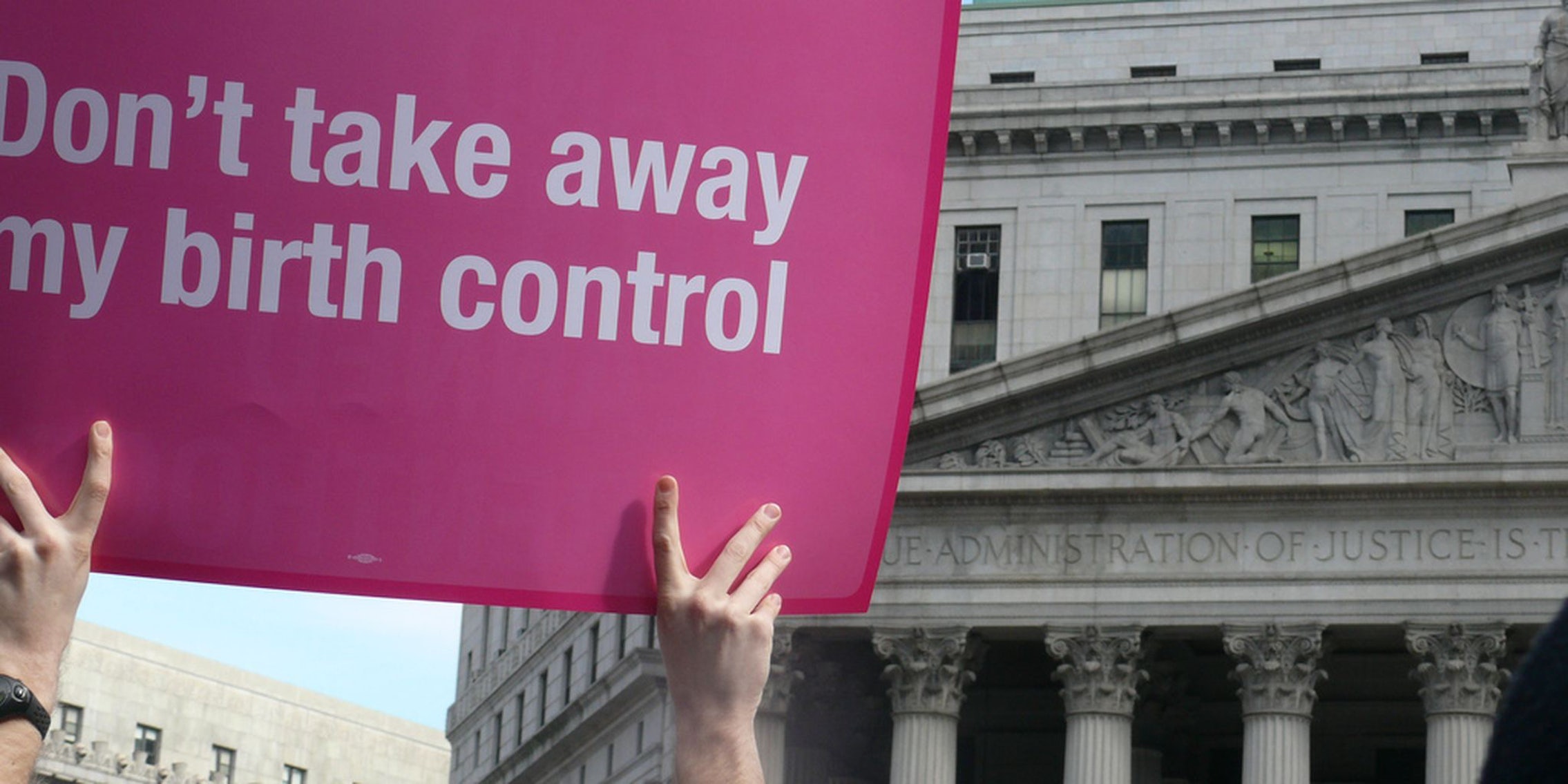 It's time to debunk some myths.

Planned Parenthood is at war.

After several “sting” videos—which have been widely debunked as a hoax—targeting the women’s health organization went viral over the past few months, abortion has once again become a hot-button issue—with Planned Parenthood at the center of the debate. Although the House recently voted to defund the organization, the Senate blocked the measure, which would deny the more than $500 million a year Planned Parenthood receives in federal funding. Meanwhile, Twitter users have been voicing their support in the fight for reproductive health, with the hashtag #ShoutYourAbortion giving women a platform to combat stigma.

No matter where you fall politically, we can all agree that it’s dangerous to attack—or defend—Planned Parenthood without knowing the facts about the organization. In the recent Republican debates, former Florida Gov. Jeb Bush asserted that he wasn’t against women’s health care—just Planned Parenthood, using the reasoning that many women could get the same services from other providers. But Vox’s Sarah Kliff debunked that logic—most women don’t have the options or resources to just “go somewhere else.”

With that in mind, here are the five biggest myths about Planned Parenthood.

The most popular statistics on Planned Parenthood state that abortions make up as much as 94 percent of their total services—or as little as three percent. But there’s a bit more to it than that.

Planned Parenthood claims that its total services are made up of 42 percent STD/STI testing and treatment, 34 percent contraception services, 11 percent other kinds women’s health treatment, nine percent cancer screening and protection, three percent abortion services, and one percent that’s classified as “other.” This category includes adoption referrals and family planning. Some of these services actually take place at Planned Parenthood, while others include referrals the organization may make on behalf of a patient.

Where things get murky is in the areas of when it comes down to the dollar signs. Critics of Planned Parenthood often attack the idea that all these services should be counted the same, as abortion often costs more than more routine services the organization provides. As the Washington Post’s Michelle Ye Hee Le writes, “advocates and opponents of abortion rights have calculated somewhere between 15 percent and 37 percent of the organization’s annual non-government health services revenue comes from abortion services.” But real figures on the subject are hard to come by.

But even while the three percent statistic doesn’t account for the total amount of revenue abortion provides the organization, the idea that 94 percent of women come to Planned Parenthood to receive abortions is inaccurate. And it discounts all the other services Planned Parenthood provides, like the 1.13 million pregnancy tests given to women every year.

One of the reasons that Carly Fiorina effectively won the second Republican debate was a horrifying description the former Hewlett-Packard CEO gave of one of the aforementioned Planned Parenthood videos. Fiorina recalled an especially gruesome scene, wherein she saw “a fully formed fetus on the table, its heart beating, its legs kicking, while someone says we have to keep it alive to harvest its brain.”

The only problem? This never happened in any of the videos Fiorina was mentioning.

What Fiorina may have been referring to was an anti-abortion documentary called Human Capital, which does include footage of a moving fetus. However, that scene was not filmed at Planned Parenthood. The documentary also includes an interview with a former procurement technician—a biomedical research company employee who obtains fetal tissue—who claims that she was once commanded to extract brain tissue from an aborted fetus.

It’s impossible to prove whether the technician was telling the truth about her experiences, but the real problem is that Human Capital does not actually contain any footage like the moment Fiorina described.

The source of confusion likely stems from the fact that Planned Parenthood receives between $30 and $100 per patient from biomedical research companies as a reimbursement for the cost of collection, storage, and transport of fetal tissue. As Sherilyn J. Sawyer, director of biorepository for Harvard University and Brigham and Women’s Hospital, told FactCheck, “in reality, $30-100 probably constitutes a loss” for Planned Parenthood.

While donation of fetal tissue may be controversial issue, the New York Times explains that “scientists at major universities and government labs have quietly been using fetal tissue for decades.” The Times’ Denise Grady and Nicholas St. Fleur report, “They say it is an invaluable tool for certain types of research, including the study of eye diseases, diabetes, and muscular dystrophy.”

And as bioethicist R. Alta Charo of the University of Wisconsin writes, “virtually every person in this country has benefited from research using fetal tissue.” She continues, “Every child who’s been spared the risks and misery of chickenpox, rubella, or polio can thank the Nobel Prize recipients and other scientists who used such tissue in research yielding the vaccines that protect us (and give even the unvaccinated the benefit of herd immunity).

The donation of fetal tissue is actually very common, with countless women choosing to do so (with the consultation of a doctor) after their abortions each year. This might seem shocking, but in the race to find cures for ailments like Alzheimer’s and ALS, it’s also incredibly important.

For years, critics have been calling for the federal government to defund Planned Parenthood.. But the idea that defunding Planned Parenthood is both the morally and fiscally responsible decision doesn’t add up.

For one thing, Planned Parenthood isn’t just funded on a federal level—it’s also allocated state by state. This is great for someone like Jeb Bush, who has been able to capitalize off his successful campaign to defund Planned Parenthood in his home state of Florida—now ranked as one of the worst states for women’s health. But since this is also a state-by-state issue, other states are free to decide whether they want to defund Planned Parenthood on an individual basis. And as long as federal funding does exist, states like Florida can’t stop the organization from getting government money.

That’s because the truth is that defunding Planned Parenthood could in fact end up costing the taxpayers money—rather than saving it. ThinkProgress’ Bryce Covert estimate that Medicaid spending would increase $650 million without the contraceptive services Planned Parenthood provides. And in Texas, where family planning services were cut by $73 million in 2011, it was determined that an additional cost of $273 million in federal Medicaid coverage would be required to make up for getting rid of these expenses in the first place.

According to Congressional Budget Office Director Keith Hall, this problem would look just as bad on a national level. Hall argued that cutting Planned Parenthood funding would lead to an increase in public spending of $130 million over 10 years.

In Florida, 25 percent of all women are uninsured—second only to Texas. And the statistics get worse from there: In addition, 20 percent of women report being in poor health and don’t have access to doctors or healthcare providers. And 23 of Florida’s counties don’t have have any practicing OB/GYN.

Women in these places are the ones who need Planned Parenthood the most. The CBO estimated that 650,000 women across the country would lose partial access to healthcare if the organization were to be defunded, which would lead to more unplanned pregnancies due to less access to birth control. This makes sense: In 18 states surveyed, Planned Parenthood helps provide access to 40 percent of women who receive birth control. In 11 other states, the number is even higher: Half of like women with access to contraceptives got them from Planned Parenthood.