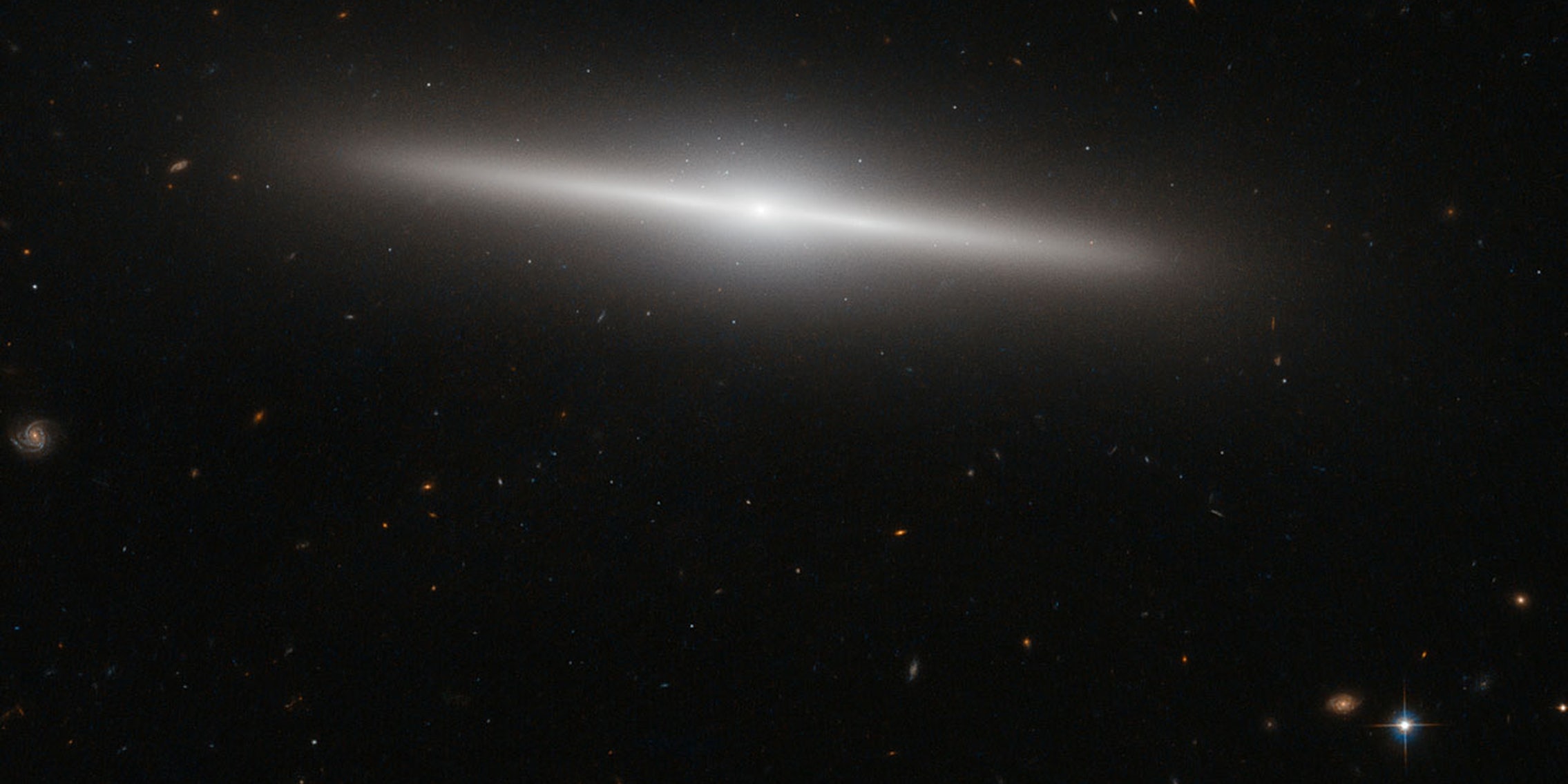 As stupid as it is, this story has a lot to teach us about ourselves.

Over the past few weeks, there’s a good chance that someone on your Facebook News Feed has shared a story about a once-in-a-lifetime planetary alignment happening on January 4, 2015. The interplanetary gravitational pull of the galactic event will, seemingly miraculously, counteract Earth’s gravity for a short period of time, rendering everyone on the planet briefly weightless.

This story was picked up by a few small viral sites like Before It’s News and Disclose.tv, but the vast majority of traffic came from a site called Daily Buzz Live.

“Strange natural occurrences are happening in the world today. But nothing more magnificent than the one you will experience on January 4, 2015,” Daily Buzz Live’s story reads. “According to British astronomer Patrick Moore, at exactly 9:47 PST AM on January 4th, Pluto will pass directly behind Jupiter, in relation to Earth.”

“This rare alignment,” the story continues,” will mean that the combined gravitational force of the two planets would exert a stronger tidal pull, temporarily counteracting the Earth’s own gravity and making people virtually weightless. Moore calls this the Jovian-Plutonian Gravitational Effect.”

By late morning on December 26, Daily Buzz Live’s story about the impending gravitational anomaly had been shared on Facebook over 1,070,000 times.

This is a mind-bogglingly enormous reach for a story that is so clearly bullshit. Furthermore, the credulous rubes who shared this story had numerous ways to fact-check it.

Anyone who did a simple Google search for the Jovian-Plutonian Gravitational Effect would have found its Wikipedia page and learned from its first sentence that this particular scam has been repeated ad nauseum for four decades.

If they had searched for “planetary alignment” in the past few days, they would have read admirable debunks of the Daily Buzz Live hoax from news sites like Slate, EarthSky, AL.com, or the granddaddy of all hoax-busting sites, Snopes.

Another cause for skepticism emanates from the tweet embedded at the top of Daily Buzz Live’s story. 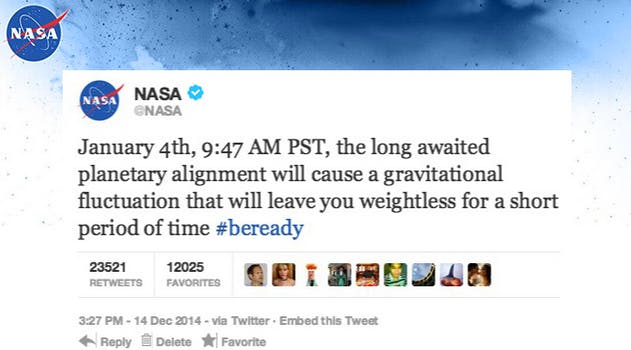 This tweet looks like it came from NASA, thus adding credibility to the ridiculous story. But if anyone had taken the time to scan through NASA’s tweets from December 14, they would have noticed that the tweet didn’t exist.

Faking tweets is actually extremely easy. All one needs to do is visit LemmeTweetThatForYou.com. This tweet took under a minute to fabricate: 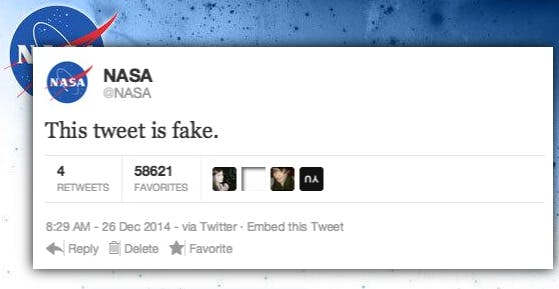 That a website knowingly perpetuated a hoax shouldn’t be surprising. This is the Internet in 2014, after all, and hoaxes are a dime a dozen. But Daily Buzz Live represents an uncomfortable new frontier, because it’s not your typical den of hoaxers.

Daily Buzz Live is a news web publication with news articles. Most are inspired by real news events, And just a few stories are works of complete fiction. Those few articles are for entertainment purposes only. The articles and stories may or may not use real names, always a semi real and/or mostly, or substantially, fictitious ways. Therefore, just a few articles contained on this website Daily Buzz Live are works of fiction. Any truth or actual facts contained in those stories or posts are purely incidental or coincidental and not intended to be, or be construed as, facts.

Daily Buzz Live’s argument is, essentially, that the planetary alignment story is a work of satire. Other sites like the National Report and the Daily Currant write similar fake news stories on a daily basis. These sites function like more subtle versions of The Onion, where the humor comes from laughing at the suckers who credulously share the stories on social media.

What separates Daily Buzz Live from the National Report or the Daily Current is that every single article on the latter two sites is fake. There is no question that they are entirely satirical publications. (Representatives from Daily Buzz Live did not immediately respond to a request for comment on their publication practices.)

On Daily Buzz Live, meanwhile, the real and the unreal are intermingled, with no labels separating them. The planetary alignment story sits next to stories about factual events like “8 Photos Of Shocking Police Brutality On Peaceful Protesters and Civilians” and “Horrific Racist Song About Michael Brown At Charity Event ‘And He’s Dead, Dead, Michael Brown’“. These are pieces that wouldn’t be out of place on real viral news sites.

If someone gets called for posting a fake story from the National Report—for example, one about Facebook’s plan to begin charging users a $2.99 monthly fee—they probably won’t do so again. In that moment, the one-time sucker joins a gradually expanding circle of knowledgeable people who mock the remaining suckers. (There is occasionally a political agenda to the mockery, albeit a well-deserved one. Your biases would have to be pretty deep-seated to blind you to the sheer unbelievability of a story like “Obamacare Pays For Octomom’s New Fertility Treatments“.)

This cycle, which powers the National Report’s popularity, doesn’t exist for Daily Buzz Live. Instead, the real and the fake exist side-by-side, and the responsibility for determining which story is which rests entirely with the reader.

Allen Montgomery, the founder of the National Report, told the Daily Dot that a site like Daily Buzz Live is intended as entertainment rather than news and should be approached as such.

“These sites (I happen to own a similar site myself) take the idea of aggregated/curated content from other sources and mix in items that are satirical in nature,” Montgomery said, “in order to prolong the hoax and make the stories more believable (which is needed to create truly viral content).”

“In a perfect world (one that seems far away at this point), content consumers would be more skeptical about what they share and would look for secondary (reputable) sources for stories they believe to be questionable,” he said.

Montgomery’s advice for news consumers is crucial in an age where social media has become the single most important avenue for the distribution of online news content.

In a recent Pew study of trust in three dozen news sources, the only publication that earned universal distrust regardless of respondents’ political ideology was BuzzFeed. At the same time, BuzzFeed is arguably the most successful online publisher in the world right now.

The lesson from BuzzFeed’s ability to win the Internet without necessarily winning its trust is that social media often severs news content from the news producer’s reputation. When someone decides whether to click on a story that their friend shared on Facebook, their click usually depends more on their friend’s reputation or the headline’s catchiness than the publication’s credibility.

It is this phenomenon that give sites like Daily Buzz Live space to blossom on social media. This is also why, if readers want to avoid getting snookered, they’re going to have to hone their bullshit detectors. But conducting the necessary research is far more difficult and time-consuming than simply clicking “Share.” Just the word “research” turns off a great many people who look back on their college essay-writing days with loathing.

The proof of our distaste for due diligence is right there in the pudding: In the time it took to write this article, another 13,000 people shared Daily Buzz Live’s planetary-alignment story. If you want to avoid ending up like them, you’re going have to start doing your homework.