No, Facebook isn’t going to start charging a monthly fee

Over the weekend, a rumor started creeping its way across Internet. The rumor was that Facebook, a service that’s been completely free since it launched from a cramped Harvard dorm room, was going to start charging users a monthly fee of $2.99—effective Nov. 1.

The rumor spawned a hashtag campaign that saw hundreds of Facebook and Twitter users urging the social network not to institute the charge. News sites across the Web reported on the story. A group in Moldova, of all places, announced it was hosting a public debate on the issue.

The rumor can be traced back to a single news story in the National Report, which reported on a press conference hosted by Facebook founder and CEO Mark Zuckerberg. “We thought long and hard about this decision, but at the end of the day, we had no choice but to add this monthly fee,” Zuckerberg told the National Report for an article that has been shared well over 9,000 times. “If we don’t do something about our rising costs now, Facebook could face an unrecoverable financial burden and become obsolete.”

Chatter about Facebook charging users for access—instead of letting them in for free and strip-mining their accounts for personal data, which the company then sells to advertisers—has existed since the days when the site’s address started with a definite article. However, this rumor was different. The entire thing was a lie, made up as a work of satire by a writer at the National Report.

The National Report was created in the mold of the Onion—to pump out fake news stories satirizing both the news industry and the subjects it covers. The Onion has been tricking people into thinking its completely fabricated stories are real for decades, although the Onion’s deceptions have been largely unintentional.

At National Report, the whole goal of the enterprise is to make the satire just subtle enough that a sizable portion of its readers won’t catch onto it immediately, if at all. In an online media environment where Internet users stumble across stories virally, without first going to a publication’s home page, it’s easy to discover an individual article while not having the faintest idea about the organization that published it. The National Report’s stock-in-trade is gradually tipping its hand over the course of the article to let people who are reading closely in on the con. “In most cases, we like to let… [our] readers discover the ‘joke’ as they are reading,” explained National Report publisher Allen Montgomery.

While the first couple paragraphs of the Facebook story read fairly straight, the piece’s smirk eventually started to show as it progressed:

Fappy The Anti-Masturbation Dolphin, a mascot for a Christian anti-masturbation group, says their business could not survive without Facebook.

“Charging people to use Facebook means there won’t be as many heathens on the site to help stay off the Devil’s playground. Personally, I like Facebook because it helps me promote my side business of making personalized video greetings. Those videos are good, clean fun for the whole family, and they also help pay for my anger management and sex offender classes. Praise Fappy!”

That segment of the story should be a dead giveaway, at least for people who read at least that far into it, that something was amiss. But, then again, maybe not.

Hundreds of Facebook users followed the article’s instructions, which were included right after the section about the pornography-hating dolphin, and posted a status update reading “I AM POOR FACEBOOK PLEASE WAIVE MY MONTHLY FEE #FacebookMonthlyFee” Posting this status would supposedly “inform the Facebook billing department to waive any fees associated with your account…[while blocking] access to all Facebook games.” 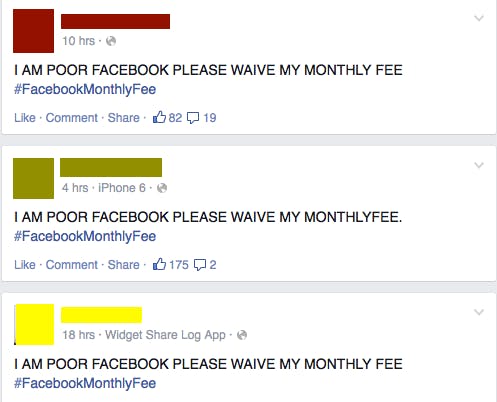 Naturally, as with anything else on the Internet, at least one person who presumably realized what was going on saw an opportunity for scamming (or maybe just another, additional level of satire): 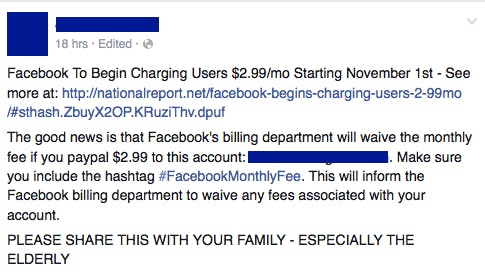 Sure, there were people calling this out as a work of fiction, but the majority posted status updates that were undoubtedly sincere.

Critics of sites like National Report, a category that includes the equally credulity-provoking Daily Currant, have charged them of being nothing more than cheap clickbait shops “cashing in on…gullibility and knee-jerk outrage” to trick people into making otherwise worthless articles go viral.

However, while Montgomery insists the goal of National Report isn’t “simply laughing at people,” the satire at work here seems to be directed as much at the subject of the article—in this case, Facebook’s longstanding difficulty turning its massive population into an Apple-level level cash cow—as it is a portion of the audience reading it.

This article is the first time the National Report has used a Facebook hashtag, but Montgomery says that pushing readers to use hashtags is something the site is likely to do again. The key here is that including a hashtag is an easy way for people to see everyone who is sharing a National Report article, sincerely or otherwise.

Mocking the rubes who aren’t savvy enough to know when they’re being hoodwinked would be more mean than it is funny if it weren’t for something fundamental about how the National Report’s satire functions. The thing that makes these stories seem believable, even when they contain details that clearly cross the line into the absurd, is that the overall thrust of the pieces fall into predetermined narratives. People will read something ridiculous in a National Report story and believe it because it’s something they already desperately want to believe.

“Confirmation bias plays a huge factor in whether or not a story has the potential of going viral,” Montgomery noted. “A story we ran last month titled ‘NYPD Officer Kills Baby Following Breastfeeding Argument’ is a great example of confirmation bias. The story, as absurd as it sounds, was read by millions of people because it was so believable (which in itself is a reflection of where we stand as a society).”

The satire here is aimed at the very belief systems of a portion of the National Report’s audience who are willing to ignore the very unbelievability of patently ridiculous details in a given story just because those details are exaggerations of things those people already hold as axiomatic—that cops are remorseless killing machines that would shoot a defenseless infant without a second thought. Granted, the NYPD does come disturbingly close to this level of horiffic burtality with depressing regularity.

Take, for example, these Facebook users who are so busy alternately parroting liberal and conservative talking points to notice that nothing in a story about former Alaska Gov. Sarah Palin had actually happened. The piece involved the Thrilla’ From Wasilla giving a speech about a man who had recently jumped the fence at the White House:

After briefly talking about Todd Palin’s collection of firearms, Palin went back to talking about the incident at the White House. “You have to ask yourself, though… are we surprised by this? This guy was a natural Mexican fence-jumper. I think that’s what they teach you in grade school over there in Mexico. How to pick lettuce, how to stand around outside a hardware store, and how to jump over fences. He was born to do it.”

The comments on the article were filled with exchanges like this one: 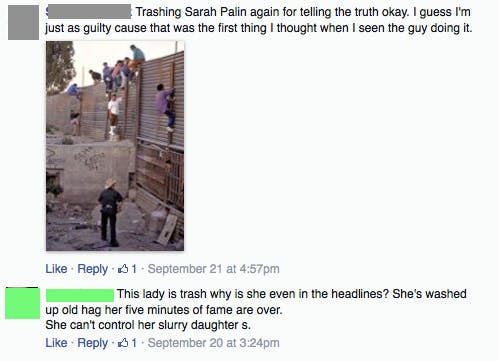 The confirmation bias issue is just as present for people whose job it is to know better.

The Fox News program Fox & Friends had to issue a public apology after doing a story based on a piece from the National Report about how President Obama was funding a museum of Islamic culture out of his own pocket during the 2013 government shutdown. The journalists at Fox & Friends were willing to ignore how odd it was that the leader of the free world would think the most important entity suffering during the government shutdown was an obscure museum in Jackson, Miss. Fox & Friends ignored those incongruous facts, at least enough to avoid making a phone call to the museum, because it fit into their narrative of Obama being a secret Muslim who cared more about appeasing America’s enemies in the Middle East than the economic security of the 850,000 furloughed federal workers who weren’t recieving paycheks during the shutdown.

“The reasons these stories were successful…[is because] each of them plays off a specific fear and/or the need for consumers of media to confirm what they already believe to be true,” Montgomery insisted.

What elevates sites like National Report over mere annoyances is that the target of their satire is the very mechanism through which the Internet disseminates news. Both individuals and news outlets are guilty of uncritically sharing or reblogging anything they come across, as long as it proves whatever they originally believed was right all along.