Nobody trusts BuzzFeed, and online media should be terrified

Only 2 percent of Internet users trust BuzzFeed as a news source. Here’s why it doesn’t matter.

On Tuesday, the Pew Research Journalism Project published the results of a fascinating study on the ways people consume political news online.

The study found that liberals and conservatives live in vastly different online media spheres. Those on the left tend to get their news from a variety of left-leaning and establishment sources ranging from ThinkProgress to NBC News. Conservatives, on the other hand, almost exclusively patronize a small network of right-wing sources centered around the behemoth that is Fox News.

Not much of a surprise. But one development did raise a few eyebrows.

The study asked people of varying political ideologies whether they trusted or distrusted three dozen different news sources. The only publication to earn universal trust was the Wall Street Journal (presumably because it’s easy for most progressives to pretend the Journal’s editorial page doesn’t exist). The only publisher to garner universal distrust was BuzzFeed. 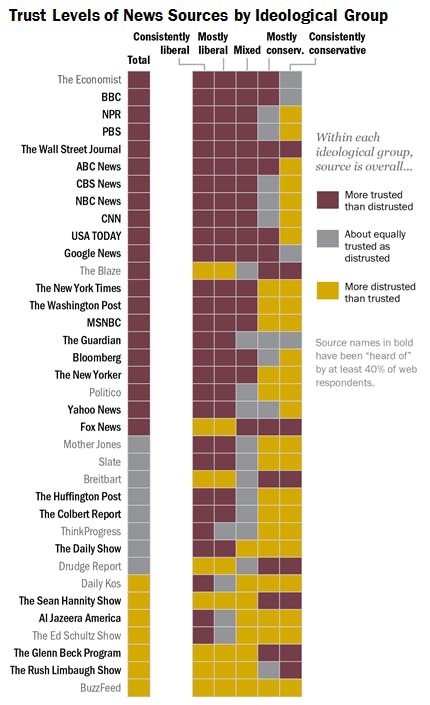 After the results were posted, many of BuzzFeed’s competitors turned the discussion into a schadenfreude free-for-all. (Gawker’s response: “No One Trusts BuzzFeed :-(.”) The results seemed to imply that the era of quizzes and listicles was over, that the average Facebook user was beginning to resent BuzzFeed as much as “real journalists” do.

But the survey results really prove something else, and it isn’t quite as bad for BuzzFeed as the site’s critics may like to believe. If the study accurately depicts how news readers view BuzzFeed—one of the most successful online publishers in the business—these results should be absolutely fucking terrifying for BuzzFeed’s competitors, especially the establishment news sources, many of which have spent the better part of a century building the trust of their readers. 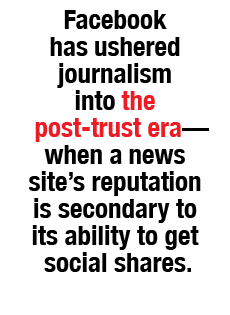 An analysis conducted by viral marketing firm Fractl earlier this year looked at the top 1 million most-shared articles for the first six months for 2014, which accounted for over 2.6 billion shares.  These articles were put out by 190 different publishers and, in sheer terms of quantity, BuzzFeed blew everyone else out of the water. BuzzFeed had over 400 million shares, the overwhelming majority of which came from Facebook. Huffington Post came in a distant second with 250 million shares. The New York Times and CNN, approximately tied for third place, barely broke 100 million.

According to a separate Pew study from last year, 71 percent of adult American Internet users regularly use Facebook. For the vast majority those people, it stands to reason that they’ve clicked on, or at the least seen, numerous pieces of content bearing the BuzzFeed logo.

Yet, as Pew researcher Amy Mitchell explained, the number of people who had even heard of BuzzFeed wasn’t particularly high. “It’s important first to recognize that just 31 percent of respondents had heard of BuzzFeed. So it was a relatively unknown quantity,” she said. Many readers on Facebook click on those shared quizzes and have no idea what they’re reading.

Mitchell detailed a multipart process Pew used for determining “trust.” First, the researchers asked people if they had head of each of the news sources. If the respondents recognized the news outlet, they asked if they trusted, distrusted it, or neither.

“When you then break down those numbers further, the greatest percentage of people who had heard of BuzzFeed did not indicate trust or distrust—they felt neutral on it,” Mitchell continued. “Then, below that, you had the 8 percent of people who said they didn’t trust the site versus the 2 percent who said they did.”

All in all, only 10 percent of all respondents even knew enough about BuzzFeed to form an opinion about it. Nevertheless, the overwhelming majority of those opinions were negative.

For their part, BuzzFeed’s brass has insisted that slamming their site for being untrustworthy when it comes to hard news isn’t entirely fair. The site has invested countless resources into building its international BuzzFeed News brand, establishing offices in Europe and India and hiring reporters across the globe.

“Most of the great news organizations have been around for decades, and trust is something you earn over time,” BuzzFeed Editor-in-Chief Ben Smith said in an email to Talking Points Memo. “Our organization is new, our news operation is even newer, and it’s early days for us. The more people know BuzzFeed News, especially young people who are make up a small share of these surveys, the more they trust us.”

This statement is unquestionably true. BuzzFeed may have been around since 2006, but the site only hired Smith, a veteran political reporter, to add a serious-journalism arm in 2011.

In the years since, Smith has made good on his mission. In the past few days alone, BuzzFeed has published in-depth investigations about much of American consumer economy is based on a foundation of political corruption and environmental degradation, how the tide of police militarization led to an infant being maimed in botched DEA drug raid, and how blackface is alive and well in the world of Hollywood stuntmen.

All of these stories are superb. They could run in The Atlantic or the New York Times Magazine and no one would bat an eye. BuzzFeed is doing top-tier journalism on a very regular basis.

But few people know they’re doing it. BuzzFeed’s serious journalism doesn’t get nearly the same amount of social media exposure as viral stories like “19 Vines That Perfectly Capture the Little Things Your Parents Do.”

BuzzFeed’s difficulty in getting its serious journalism to resonate with the public isn’t surprising, or even all that unique to BuzzFeed. What’s more interesting is trying to figure out how BuzzFeed is able to be the most widely viewed publisher on the Internet while 90 percent of American Internet users don’t know enough about it to form an opinion.

Facebook has the effect of stripping news from the context of its publisher. The Pew study found that, while almost half of respondents get news from Facebook, only 30 percent of those people actually signed up to received updates from news sites. Most articles flow into their news feeds passively, either popping up as a trending topic or as a result of a friend sharing it.

According to Kenny Olmstead, another Pew researcher, prior surveys have shown that Facebook has a tendency to cause people to replace in their minds whoever actually created a piece of content (let’s say the Daily Dot, for example) with how they found that content (Facebook). “People’s inability to recall precisely where they read something isn’t unique to Facebook; social scientists have been saying this for years,” Olmstead explained. “But Facebook is just amplifying that because there’s so much more information on the news feed than people have traditionally had access to before.”

Someone can see a news item shared on Facebook and not give a second thought to if its source is trustworthy. The story was shared by a friend or family member, a person they trust, so the need to have faith in the publisher of that content is diminished. Facebook, which has quickly become the single largest driver of traffic to news sites across the entire Internet, is ushering journalism into the post-trust era—when the reputation of a news site is secondary to its ability to get social shares.

This situation is why faux-news sites like the National Report are able to get millions of gullible readers to share thinly veiled satire like “Dallas Cancels Halloween Amid Ebola Concerns” or “Monica Lewinsky Forms Exploratory Committee for Potential 2016 White House Run” or “Actress Betty White, 92, Dyes Peacefully in Her Los Angeles Home” think they’re the gospel truth.

BuzzFeed’s ability to succeed without the explicit trust of its readers says more about how social media like Facebook are affecting the way that news is distributed and consumed online than it does about BuzzFeed itself. Rather than taking the opportunity to gloat, competitors ought to think long and hard about an industry where the trust of readers—the singular quality on which media empires have depended for hundreds of years—doesn’t measure up to a mess of pottage.

Photo via Daniel Mitchell/Flickr (CC BY 2.0) | Remix by Rob Price