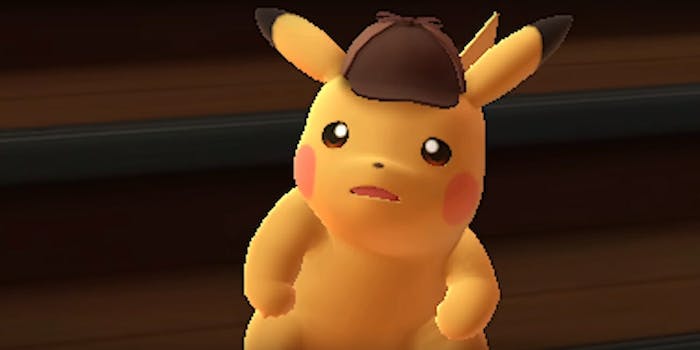 People are freaking out about Detective Pikachu’s weird adult voice

People are freaking out over Pikachu's new voice.

The English-language trailer for Detective Pikachu is here, and it’s opening people’s eyes—and ears—to who Detective Pikachu actually is. Namely, an adorable pokemon with the unsettlingly deep voice of an adult man.

This weird combination will soon receive a film adaptation starring Ryan Reynolds (yes, Deadpool) as the title character. But for now, we just have the Nintendo 3DS game, released in 2016 in Japan and coming to North America on March 23. If you haven’t heard the voice before, this trailer is a uniquely bizarre experience. It’s a childlike CGI animation with Pikachu as a jovial Sherlock Holmes, and it’s making people feel very uncomfortable.

While Nintendo didn’t manage to hire Danny DeVito to play Pikachu, his voice is still causing a wave of freakouts.

Maybe this game will become a cult hit in the U.S., but it’s still a mystery why Hollywood decided this was the best idea for a live-action Pokémon movie. Rather than making a charming children’s fantasy adventure, we’re getting what sounds like the 2010s version of the live-action Super Mario movie… starring Ryan Reynolds as a lovable cartoon rodent. Isn’t art wonderful?