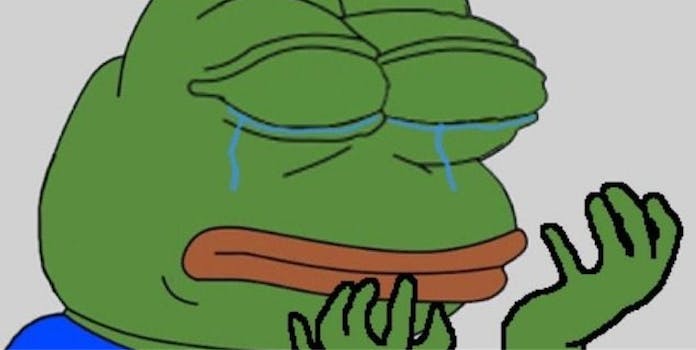 Matt Furie, creator of the webcomic-character-turned-meme Pepe the Frog, is escalating his effort to keep his easygoing cartoon frog out of the hands of the ‘alt-right,’ a loose collection of right-wing organizations that harbor white supremacists. In August, he used a copyright takedown to put the kibosh on the alt-right-inflected kids’ book The Adventures of Pepe and Pede, and now he’s demanding that various right-wing groups and personalities, including white supremacist Richard Spencer, online agitator Mike Cernovich, and Reddit’s toxic Donald Trump-boosting subreddit r/the_donald, stop using the character he created.

Vice’s Motherboard reports Furie’s lawyers have hit alt-righters with cease and desist demands, as well as serving Digital Millennium Copyright Act notices to corporations including “Reddit, Amazon, YouTube, and Twitter.” “The message to the alt-right is clear,” Motherboard reports, “Stop using Pepe the Frog or prepare for legal consequences.”

During the 2016 election cycle, Pepe became such a prominent symbol of alt-right and Nazi trolling that Hillary Clinton mentioned him in a blog post about the rising online hate movement. Previously, he had been an easygoing comic character and a sort of everyman meme that 4chan posters could use to represent their own “feels” about different situations. The rise of online Trump trolls shifted his meaning so completely that the Anti-Defamation League declared him a hate symbol.

Furie attempted to reclaim Pepe from the white supremacists, and even killed the frog in a special comic, but his efforts had little effect. The legal campaign has been more fruitful so far, reaching a settlement that took Pepe and Pede off of shelves and Amazon listings. All of the book’s profits were donated to the Council on American-Islamic Relations.

Furie’s lawyer, Louis Tompros of Wilmer Cutler Pickering Hale and Dorr LLP, is representing him pro bono. Tompros gave Motherboard a rundown of all the takedowns he’s served so far. The firm has demanded that Richard Spencer remove Pepe from his altright.com website and stop using the frog as his podcast mascot. It has also put popular alt-right personality Baked Alaska on notice, even getting Amazon to stop listing his book, Meme Magic. The book featured Pepe on its cover.

If the alt-right doesn’t respond to this barrage of takedown notices, Tompros told Motherboard he’s fully prepared to file suit on Furie’s behalf. Speaking for his cartoonist client, who’s tried to stay out of the media this year, Tompros said, “He’s ready and wants to keep up the fight and wants to take down anyone who’s using his character. He’s also received words of support from fans and others. He’s taking comfort in that.”

The battle for the soul of Pepe, once fought on the subreddits and messageboards of the internet, may be headed into the courtroom.