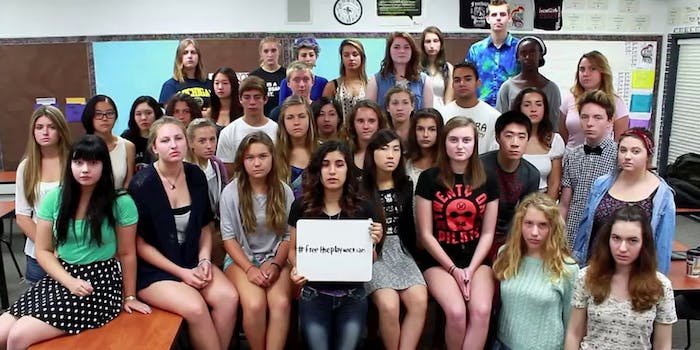 The controversy has reached a tipping point. Here's what you can do to help.

A year-long standoff between a Pennsylvania high school administration and its student body newspaper has resulted in suspensions, a $1200 fine, and an IndieGoGo campaign in protest—all because the student editorial staff of the paper is refusing to print the word “Redskins.”

Journalism teacher and newspaper advisor Tara Hubler, who won the Teacher of the Year award from Pennsylvania’s School Press association, received a two-day suspension without pay because of her support of her students. The paper’s editor-in-chief, student Gillian McGoldrick, was also suspended over her staff’s refusal to print the word, which they argue is racist and offensive.

The Redskins are the official mascot of Neshaminy High School in Langhorne, Penn. Following the example of numerous national media outlets, including the Washington Post and the San Francisco Chronicle, the student editorial staff of Neshaminy’s Playwickian newspaper stopped using the term last October, citing its offensive status as a racial epithet against Native Americans.

“The ‘R-Word’ is at least awkward, at most a racist slur,” they wrote in an unsigned editorial, which has since been taken offline. “The Playwickian cannot publish it for these reasons. The change is not being encouraged for the sake of political correctness itself, but for the sake of being respectful and fair to an entire race.”

But principal Rob McGee overturned the newspaper’s ban on the word a few weeks later, issuing a directive to the students that they not only had to continue using it, but that they also had to accept advertising that used the word.

School board president Ritchie Webb defended McGee’s decision to the Student Press Law Center at the time:  “Whenever we use the term ‘Redskin,’ it is only in a positive light,” he said, claiming the students’ decision to ban the word violated the rights of other students—and advertisers—who wanted to use the word freely.

That was a year ago. Since then, the student newspaper has fought back, declaring through official legal statements and through house ads in the paper that it has the constitutional right to exert editorial control over the newspaper without interference. In response, McGee has reportedly slapped the newspaper with a series of escalating penalties, including:

This evening our twitter will be deactivated due to an administration directive. We’d like to wish our followers a nice summer while we can

The newspaper, which has garnered national attention over the year it has been fighting McGee’s order, said in a statement issued to the principal last December that any disciplinary action the principal took could be grounds for a lawsuit. The defense didn’t seem to stop the principal from issuing the suspensions this week.

This isn’t the first time that the school’s newspaper has tried to ban the use of the word. The last time was in 2001. While the controversy hasn’t eased in the interim 13 years, social media has become a gamechanger:  Numerous legal and student advocacy associations have shown their support for the Neshaminy students by buying up advertising space in the Playwickian. Student presses around the country have joined in to cheer them on. “When one publication is threatened, we are all threatened,” wrote the Foothill Dragon Press in Ventura, Calif. Another in Texas wore armbands in solidarity with the newspaper staff during McGoldrick’s two-day suspension.

Wednesday, the Foothill Dragon Press launched an IndieGoGo campaign, as well as a hashtag campaign, to “Free the Playwickian.” The crowdfunding effort, which has already surpassed its $2600 goal, sought $1,200 to cover the money the administration docked from Playwickian‘s budget, and an additional $1,200 to cover Huber’s wages for the two days she was suspended.

“By donating,” they wrote, “you simply are affirming the rights of high school student journalists to decide what is offensive, racist or unwanted in their own publications.”