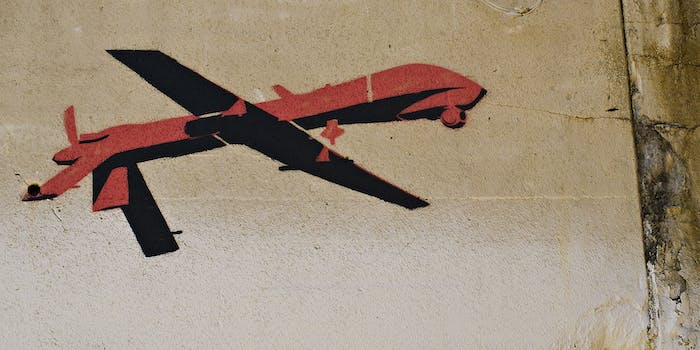 The paradox of Amazon’s tech futurism

Why are we so willing to entertain one vision of the future when we’re clearly being sold another.

Last Sunday, Amazon set the tech world abuzz with a promotional video detailing its plans for delivering packages using small, unmanned helicopters on 60 Minutes. The suggestion was that these automated drones would cut delivery times on select orders down to about 30 minutes—well below the one-hour benchmark that’s long been Amazon’s goal.

It’s flashy, high-concept stuff (and, according to some estimates, may not even be legal in the U.S. before 2020, if ever), but it does, at least, reiterate our perception that Amazon is a company with its mind set on the future. That may very well have been the point.

The more Amazon looks like it’s operating in some hypothetical future, the cozier some of us feel about it—not least of all its investors. Based on the tone of its report, we could likely include 60 Minutes, as well as some portion of its 12.7 million viewers, among those ranks. And there are reportedly 225 million customers comfortable enough with Amazon to shop there for everything from books to groceries to 3-D printers.

It would be easy to assume, based on the welter of Internet spoofs that bubbled up in its wake, that most people are dismissive of Amazon’s plan. (UPS, apparently, is not.) Yet the notion of drone delivery has captured the attention of nearly every media outlet. A few, like tech site Quartz, have declared its impracticability outright, but their tone is consistently about the shape of the future: We’re curious as to where the company’s taking us, even to the point of overlooking some of the less palatable aspects of how it’s getting us there.

As recently as August, President Obama could be seen on a tour of an Amazon fulfillment center in Chattanooga, Tenn., calling the company “a great example of what’s possible,” much to the chagrin of independent booksellers. In pitching his “grand bargain for the middle-class,” Obama talked about the government’s role in partnering with the private sector “to upgrade what businesses like Amazon need most”—namely: transportation and energy infrastructure.

Little wonder, then, that Amazon founder Jeff Bezos seems so confident that the Federal Aviation Administration, the regulatory body in charge of clearing airspace for new vehicles, will pave the way for drone-delivered packages. The executive branch has already positioned itself in the business of enabling Amazon to chart the future, even as the U.S. Postal Service negotiated a deal to ensure Sunday delivery for Amazon packages. Both despite Amazon’s own reticence in paying corporate taxes that would help pay for the public infrastructure it uses. Now that the Supreme Court has declined to take up Amazon’s appeal to a recent New York court ruling, however, it seems likely other states will rush to collect sales taxes on Amazon’s transactions shipped to their soil.

That change is a rare setback for Amazon, which has relied on such tax loopholes to give it a price advantage over brick-and-mortar stores. (The company has made a habit of channeling European sales through Luxembourg to much the same effect.) Given Bezos’ track record, it’s likely that he’ll push to maintain low prices even with the increased tax burden, and even if that means generating less revenue for now. The company has succeeded largely on its willingness to take losses in the short term in order to price lower than others can afford to match—even an especially motivated online retailer like Overstock. Side-stepping the tax requirements that pertain to most businesses is one strategy for keeping prices low, but it’s hardly the only one.

Some of those practices—like the SEO benefit derived from the deactivated storefront pages, or threats to stop selling certain titles unless publishers offer wholesale discounts—border on predatory, but that only affects Amazon’s reputation to the extent that we keep them in plain sight. With the sparkle of quick delivery and deep discounts to distract us, that’s sometimes easier said than done.

I’ve written before that digital media functions as a kind of pocket world—that, of all the many functions we rely on it to perform, the most pervasive and problematic is the way in which it conceals. For online retailers, one advantage of that pocket quality is how it hides from consumers the people who fulfill their orders.

Presumably, many of us would think twice about supporting a corporation that ran its employees ragged without paying a liveable wage. That’s why Walmart moved so swiftly to rewrite the narrative when one of its Ohio stores held a food drive to help impoverished employees through the holiday season. Since the largest online retailers typically ship from warehouses that are closed to the public, though, they lack even the basic opportunities for transparency afforded by daily, direct contact between employees and the consumer.

That, in turn, opens the door to the sorts of business practices regulators spent the better part of the 20th century working to curb. Multiple former employees have filed suit against Amazon, for example, seeking pay for the half hour per week they spend in anti-theft searches at its fulfillment centers.

When that sort of legal trouble draws too much attention, an online retailer can drive business deeper into the pocket, where it’s easy to conceal. Outsourcing lets “temporary-staffing agencies keep the stink of unacceptable labor conditions off the companies whose names you know,” as Mac McClelland explained in a Mother Jones exposé on working conditions at one Amazon-affiliated fulfillment center. Accidents are a risk workers run in any warehouse environment, but the pace demanded by Amazon’s margins leaves little time for due caution. Fingers get severed in conveyor belts, McClelland claims, adding that, “about once a year, they tell us, someone in an Amalgamated warehouse gets caught by the hair,” losing part of their scalp in the process.

Outsourcing also allows Amazon or its affiliates to fire workers for almost any reason, making job security practically nil. One hire described in McClelland’s article was fired when he took a day off for the birth of his child. Others have been penalized for missing work days due to injuries they sustained on the job. More recent reports from the Guardian and the BBC tend to confirm that long hours, harsh working conditions, and unforgiving hiring practices are simply part of what it takes to “slash prices and deliver products superfast and offer free shipping and still post profits in the millions or billions.”

Or, rather, billions in revenue, since, with Bezos’ sights set on the long game, Amazon consistently posts losses. That extended game plan centers on acting as a loss leader while the company corners every market it enters. Initially, that meant books, since their physical regularity and postal service book rates make shipping units comparatively cost-effective. It has since come to mean anything that can be shipped. In the long term, though, the more directly profitable enterprise may end up being Amazon Web Services (AWS), which is predicted to earn the company $50 billion or more by 2015.

Initially built to support Amazon’s own network, AWS provides the cloud infrastructure on which much of the Web operates. As a result, Amazon now competes not only against online big-box retailers but also with big-league providers of digital services. Google recently fielded a direct competitor, Compute Engine, even as Amazon beat out IBM for a $600 million dollar government contract. Having fought that battle in the courts, Amazon has reportedly won the right to build and host a private cloud for the CIA.

More substantively than drone-delivered iPads, then, this may be shape of the future we’re helping to fund with the billions we pour into Amazon annually. It’s a future where spycraft funnels hundreds of millions in taxpayer dollars into a commercial retailer’s network; where people fight for back-breaking, low-wage jobs with no security and little transparency in the name of convenient online shopping; where an agile tech giant runs just far enough ahead of the legal system’s grasp of changing technology to edge all competition from the field; and where the government lauds it all as a shining example for the rejuvenation of the middle class.

It need not be that way, save that so many of us are willing to play into Amazon’s strategy. We might try to excuse it by talking about the free market, but a healthy market depends on competition, and we’ve largely forsaken that in the interest of flash sales, free delivery, and the extra pocket money we make dotting our blogs with Amazon Affiliate links. A few countries (mostly European culture-hawks, like France and Germany) have proactively legislated to level the playing field, but consumers in the U.S. are mainly content to treat Amazon’s challenges to the framework of existing law as a spectator sport, rather than as something that affects communities in the long run. We could push our representatives for fairer tax laws and more stringent protections for workers, but the vast majority of us stand by, dazzled by the image of a flying robot that delivers consumer goods to an idyllic house by the sea.

That, after all, is the paradox of tech futurism: that we’re so willing to entertain one vision of the future when we’re clearly being sold another. To those of us who are excited enough about the impact of technology on society, a company like Amazon can push toward whatever future it envisions, so long as it feels like the future.