Former Amazon sellers are being dominated by the retail giant in searches for their own products, and there's nothing they can do about it.

According to recent figures, even in a small market an SEO analyst can command close to $40,000. And that’s at the low end of the scale. An experienced SEO director working in a major city can easily make six figures a year.

Companies pay so much because, in an age when most people are afraid to even go to a restaurant without advance online scouting, search engine results can make or break your company.

But many small businesses are finding it hard to compete with one the Internet’s largest online retailers. Former Amazon small business partners say their past relationship with the online retail giant has hurt their companies while Amazon reaps an unfair advantage from their inactive virtual storefronts.

It’s a problem that’s plagued small business owners like Dani, the owner of the New York-based jewelry store 47stcloseouts.com, who asked that his last name not be used. Dani is a former member of Amazon’s Pro Merchant program. Even after ending his partnership with the site—frustrated over the unreasonable delivery time promises Amazon made on his behalf—the search results for Dani’s Amazon storefront continue to beat the listings for his actual store on Google. The result was more customers going to Amazon instead of his store.

“I was competing against myself,” he said.

Dani’s not alone. Online forums are filled with complaints from former Amazon Pro Merchants who claim they were often suspended from selling on Amazon because of failure to meet the company’s partnership standards. All the while, however, their inactive Amazon listings continued to top Web searches and divert customers away from their main sites.

Harsher critics are arguing that Amazon’s tactics are tantamount to black hat SEO activity—the kind that’s gotten other companies banned from Google for violating the search engines rules governing what is and is not fair in the world of online searches. 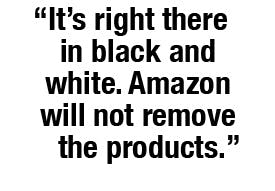 One former seller and self-proclaimed SEO expert, who asked to be kept anonymous, shared information with the Daily Dot about her experience dealing with the company after she stopped selling on Amazon. In emails with Amazon customer support, the seller tried in vain to have all traces of their former storefront and “At a Glance” page removed from the site.

In its response, Amazon Seller Support insisted that “the Storefront and Seller ‘At a Glance’ pages are designed to remain on the site indefinitely.” Amazon claimed it has no code in place to take down the former seller’s images and information that are allowing Amazon to best them in Google’s search rankings.

“I had almost a thousand products on Amazon,” the seller said. “They’re still there, images and all. It’s right there in black and white. Amazon will not remove the products. They have no code for it?  You don’t need code to remove anything. You simply delete. What happened when the pedophile on Amazon was selling his how-to book?  Amazon removed it fast.”

This same seller also argued that Amazon sets up its merchants to maximize search results for the mega online retailer. In an Amazon Seller Support blog, sellers are encouraged to fill their listings with as many keywords as possible, up to 40. But the seller said most of these do not actually appear in the product description and could be construed as “Hidden Text,” a violation of Google webmaster guidelines.

Many facets of Google’s search algorithm are kept secret, but one widely understood factor is the number of links from other relevant sites. It’s a useful way to rank search results, but it has often been abused by businesses looking for a competitive edge online.

In 2011, Google had to punish J.C. Penney after the company was found to be benefiting from a “linking scheme”—a black hat SEO tactic designed to buoy search results by floating thousands of bogus links. In the case of J.C. Penney, there were countless sites whose only purpose was to grab the attention of search engines and immediately redirect to JCPenney.com. According to the New York Times, there were more than 2,000 of these sites just for keywords involving dresses.

Despite the “black hat” moniker and its connotation of lawlessness, this kind of activity isn’t illegal. But it is in clear violation of Google’s Webmaster policies. One of Google’s main goals is to preserve the quality of its search engine by maintaining an even playing field, said Google spokesperson Gina Weakley Johnson.

“Sites sometimes violate Google’s webmaster guidelines in an attempt to game our algorithms and trick their way to the top of our results,” Johnson told the Daily Dot. “If they succeed, this hurts the search experience for people coming to Google, because high-quality information gets buried by spammers and sites don’t get to compete on a level playing field.”

For companies that violate these policies, the punishment from Google can be swift and devastating. BMW learned that lesson the hard way in 2006, when it was completely dropped from Google’s index after it was revealed that the company was utilizing “doorway pages” to pump-up its search results.

But how does this relate to Amazon’s empty storefront issue with its small business owners?

SEO expert Jeremy Bencken said former Amazon sellers upset about not having their listings removed from the site could conceivably make the case that Amazon is using black hat SEO tactics and get those pages buried in Google’s rankings. But that’s only if they can get their copyrighted images and information removed from their abandoned Amazon storefronts, reducing the pages to little more than keywords without content.

“[W]ithout that content, all you have are pages with keywords and no content,” Bencken told the Daily Dot. “At that point, you might be able to report the pages to Google as being misleading since the product isn’t actually available and there’s no content.”

Getting to that point may be difficult, though. Aside from Amazon’s insistence that it’s unable to clear out abandoned online storefronts, sellers also have to contend with the terms of the company’s merchant agreement, which gives Amazon a license to use any images and text they upload. And as long as that information still exists on one of Amazon’s perfectly search-optimized pages, the retail giant will continue to crush its former business partners in the Google rankings for their own products.

Despite complaints, many of the SEO aficionados and online retailing experts approached for this story were reticent to compare this friction between Amazon and its former sellers to the kind of black-hat tactics employed by J.C. Penney, BMW, and others.

Amazon failed to return repeated requests for comment or interview.

“I think you’ve found a few folks who’ve had some bad experiences in this regard with Amazon,” said Bill McClellan of the Electronic Retailing Association. “I don’t think this is representative of a lot of people’s experiences.”