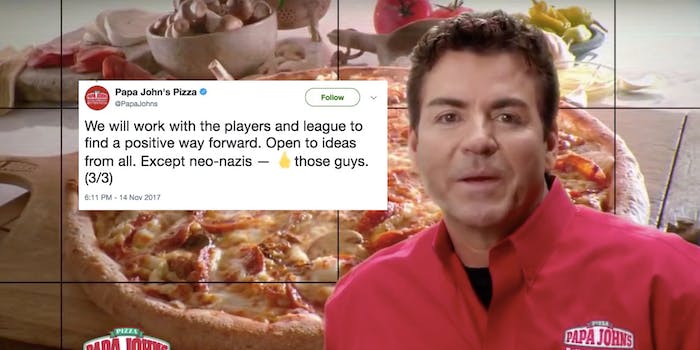 The tweets follow recent statements from CEO John Schnatter (a.k.a. Papa), who blamed national anthem football protests for a sharp decrease in pizza sales this month. Since 2010, Papa John’s has been the official pizza of the NFL.

When the pizza giant’s anti-protest stance was made public, some white supremacists took it as a sign to re-name the brand as the “official pizza of the alt-right.”

In an effort to move on from backlash, the official Twitter account, @PapaJohns, crafted a three-part message aimed to clear any confusion about recent events.

“We will work with the players and league to find a positive way forward. Open to ideas from all. Except neo-nazis –[middle finger] those guys,” read the third tweet.

It’s safe to say customers were far from pleased with this apology.

When you acknowledge that the kneeling protests ONE thing only, specifically police brutality against minorities, and that the protests do not disrespect either the military nor our flag, THEN I MIGHT consider eating your shitty pizza again.

I really doubt it.

Is this supposed to be Woke Papa John's Pizza? I'm confused, because your CEO definitely blamed the NFL protests for poor sales and criticized the NFL's leadership for not squelching the protests sooner.

I don't see an apology for that.

You may be offending some of your only remaining customers. (Spoilers: They're Nazis) #crappypizza

The Twitter bio reads, “Better Ingredients, Better Pizza, Better Tweets.”  Should we be the one to tell them, or…?