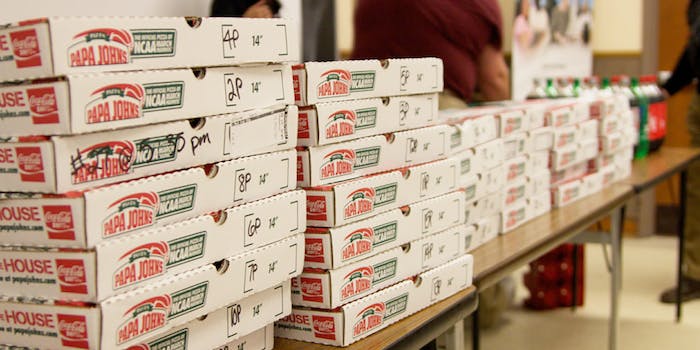 'We do not want these individuals or groups to buy our pizza.'

The condemnation from the national pizza chain came shortly after the notorious neo-Nazi website the Daily Stormer posted a blog post where it questioned whether Papa John’s was the “official pizza of the alt-right?” The post followed reports that Papa John’s sales had been negatively impacted by NFL players boycotting the national anthem, prompting right-wing voters and supporters of President Donald Trump, who has opposed the NFL protests, to buy Papa John’s pizza.

Papa John’s has been the pizza sponsor of the NFL since 2010.

“This might be the first time ever in modern history that a major institution is going to be completely destroyed explicitly because of public outrage over their anti-White agenda,” Daily Stormer blogger Adrian Sol wrote.

In response, Papa John’s told the Courier-Journal that they do not want readers or sympathizers of the Daily Stormer to eat their pizza.

“We condemn racism in all forms and any and all hate groups that support it,” Senior Director of Public Relations at the company Peter Collins told the Courier-Journal. “We do not want these individuals or groups to buy our pizza.”

Papa John’s CEO John Schnatter seemed to blame the protests, which were sparked as a response to police brutality against people of color, for sagging pizza sales in a conference call last week.

“The NFL has hurt us,” he said. “We are disappointed the NFL and its leadership did not resolve this. … Leadership starts at the top, and this is an example of poor leadership.”

The protests in the NFL drew heightened scrutiny after Trump continuously attacked players for the protests and at one point praised the “great anger” displayed by fans over players kneeling during the national anthem.