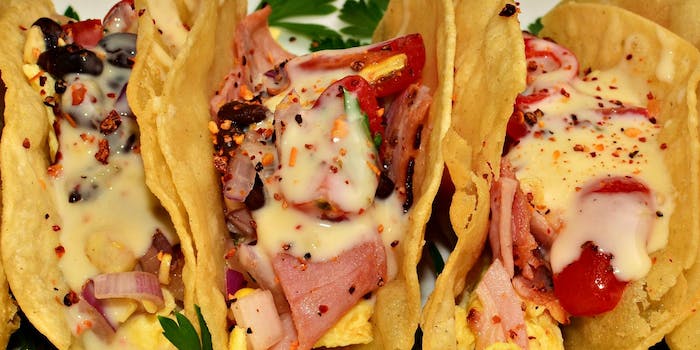 Do not mess with Texas (or its breakfast taco origins).

As the saying goes, one is ill-advised to mess with Texas. But one little-known caveat included in that idea is not to mess with the origin of one of the state’s greatest gifts to the world. Otherwise, people will want to throw you out of the state for your transgressions.

That’s why a jokester named Robbie Rodgers from San Antonio has created a Change.org petition that calls for a writer from Eater.com to be exiled from the state for “taco negligence.”

The crime of the writer, Matthew Sedacca? Having the gall to write that breakfast tacos were first created in Austin instead of in south Texas and/or, more specifically, San Antonio.

Here’s what Sedacca suggested that caused so much carnage: While writing about the history of the breakfast taco—chillingly titled, “How Austin Became the Home of the Crucial Breakfast Taco”—he described how the annual South By Southwest festival helped cement Austin as the taco’s creator.

As for the origins, Sedacca wrote, “While its conceptual origin has been definitively established, the breakfast taco’s transition from family kitchen to the commercial arena isn’t so clear cut. [Food writer] Robert Walsh claims that records point to Corpus Christi… in the 1950s as the first instance of the iconic breakfast’s existence, known then as the ‘breakfast taquito.’ But Austin, according to Walsh, is the birthplace of the phrase breakfast taco, and thus the original catalyst for its widespread, and originally unexpected popularity.”

The people of San Antonio, though, mightily disagreed, and in the petition, Rodgers writes venomously:

We, the people of San Antonio and affiliated communities of South Texas, demand that the City of Austin throw Matthew Sedacca out of an unmarked van well outside the boundaries of the state, or make equally suitable amends such as detailed below.

The subject of tacos, especially in reference to their origin and quality, has long been a sensitive issue and constant source of inter-regional strife within Texas. Without fail, sophomoric claims of taco-superiority have been issued from Austin-based brunch-chair-experts on a nearly annual basis, threatening the harmony between the city of Austin and the cities with populations of Native Texans greater than 10%.

Sedacca’s churlishly negligent treatise is the latest of these affronts and stands as the most outrageous and insultingly uninformed in recent memory, and boy, did he step into some shit. It’s wild inaccuracies, which dangerously approach libel, have already stirred the ire of many South Texas communities and further discord may loom on the horizon.

Some of the rage from Rodgers builds from the idea that Texas citizens who don’t live in Austin tend to dismiss the state’s capital city as a bunch of hacky-sack playing liberals who take credit for the inventions of others. Or, as Rodgers writes, “Birkenstock-clad tech-jockeys and university incubatees majoring in Phish and Social Safety Net Surfing.”

(As an aside, I live in Austin, and I can admit that Rodgers isn’t necessarily incorrect.)

Rodgers submits a number of ideas for punishment, which you can read along with the 1,455 people who have signed the petition as of 4 p.m. ET on Tuesday. And while Rodgers, on some level, is (mostly) joking, he also told mySA.com, “The things that are part of our daily life here are being marketed outside of San Antonio.”

As for Sedacca, this was the last tweet he sent as of Tuesday afternoon. Hopefully, for his sake, he’ll write more about the breakfast items he loves the most.