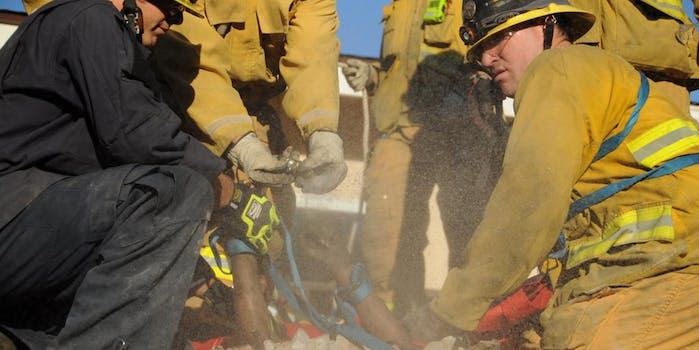 You know, maybe people are right to be suspicious of online dating—if it leads to scenes like this one, anyway: Early yesterday morning, in Thousand Oaks, Calif., residents reported crying noises, which were traced to a chimney in which a woman had become stuck.

The local fire department soon arrived to extract 28-year-old Genoveva Nunez-Figueroa, who was revealed to have briefly dated the house’s occupant after the two met online. Because this is the future, the emergency responders livetweeted the whole rescue operation, which involved lubricating Nunez-Figueroa with dish soap and dismantling part of the chimney.

#entrapment patient has been extricated will be transported to hospital for evaluation pic.twitter.com/BPQ4ALB1sC

Another shot from entrapment call. Chimney flue was lubricated with dish soap prior to hoisting patient pic.twitter.com/KtkX1bVdmV

#entrapment patient was lifted out of chimney and hoisted from roof using ladder truck and stokes basket pic.twitter.com/SlUITCmXpU

“I’m going to be a little more cautious of who I invite into my house now,” said Lawrence, the man whose home Nunez-Figueroa had tried to infiltrate (he declined to give his last name). After a few dates with her, Lawrence explained, he had ended the relationship, and just two weeks ago had called the police to report her prowling around on his roof—but she got away.

Nunez-Figueroa was “arrested for illegal entry and providing false information to a peace officer,” reported ABC7 Los Angeles, though she may cut a deal by pleading #thirsty.