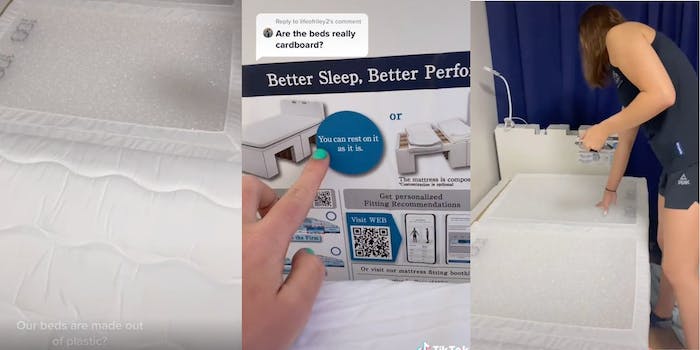 ‘Get our Olympians some proper sleeping beds’: Athletes post their plastic mattresses on TikTok, sparking outrage

While folks applauded the recyclable materials, they questioned whether the mattresses were suitable for Olympians.

Shortly after Olympic beds in Tokyo were disproved to be “anti-sex,” the beds are under fire once again for their plastic mattresses.

“We have an update,” Clareburt announced before revealing that their mattresses are made of three different plastic panels that appear to resemble styrofoam.

The plastic pieces had varying levels of softness, according to Clareburt and Galyer.

Some viewers were quick to explain that the beds are made to be recycled into new plastic items after the Olympics, but others said that wasn’t good enough.

“So… the beds are “made to be recyclable.” But why not make good quality beds and give them away to those who need them after the olympics? (Seriously!)” one viewer commented.

“Get our Olympians some proper sleeping beds…” one critic stated.

Another said, “I understand the purpose but shouldn’t athletes be sleeping on good comfortable mattresses? Unless this is comfortable then I’m all for it.”

Other viewers appreciated the recyclability aspect but still had reservations.

“It’s a great idea, but if the athletes can’t sleep properly then it’s not for purpose..” one user said.

Another person commented, “I’m glad that they are recyclable but if they mess up your back and make you sore when you’re at the Olympics what’s the point?”

Kearns said athletes can customize the mattresses to have them as hard or soft as they like, and the pads come with a comfortable mattress topper.

“We love them,” Kearns said.

Her TikTok was met with reactions similar to those of Clareburt’s video. Several viewers called out the Olympics for being cheap.