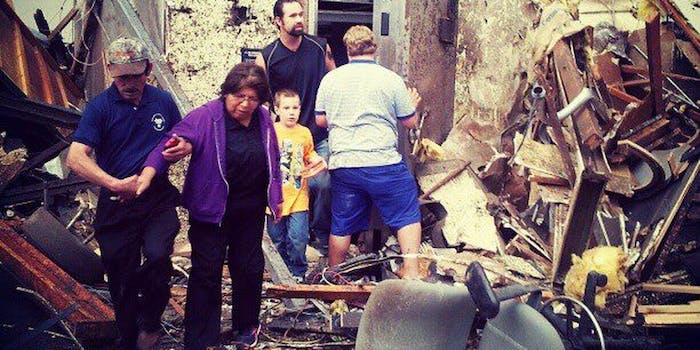 Redditor who hid from Okla. tornado in a bank vault shares AMA

She survived the devastating tornadoes in Oklahoma. And now she's telling Reddit her story.

She survived the devastating tornadoes in Oklahoma. And now she’s telling Reddit her story.

On May 23, Dena Clark, a resident of Moore, Oklahoma, revealed to the social news site that she hid from the deadly storms in a bank vault with 22 others. As proof, she provided a photo she snapped of her fellow survivors being led to freedom through the remnants of the bank. 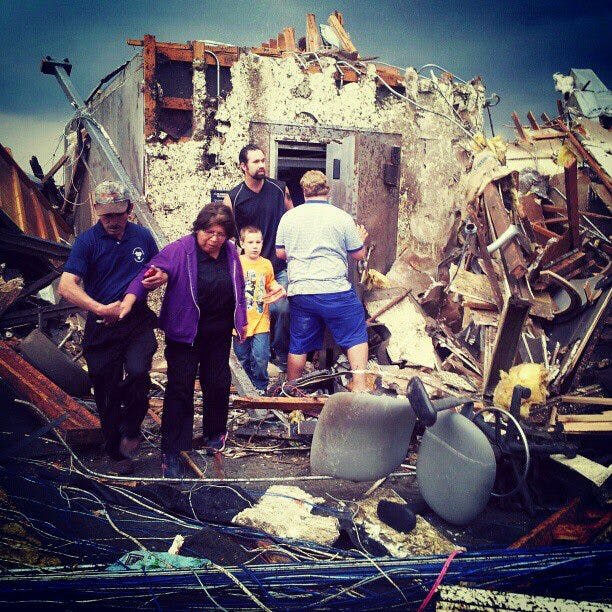 Redditors flooded the AMA with well-wishes and questions.

There was lots of popping in the beginning. I remember hearing the glass shatter and the debris even began to squeeze through the cracks of the door. It was very loud. My husband describes it as sounding like a freight train when he recalls the tornado he went through in 1999. I guess I would agree with that, but also the word I can come up with to describe it is “swirling”, loud swirling. By the sounds, I knew things were rotating above us.

At any time did it feel like the vault would break open? Thank you for doing this AMA, I hope you, your family, and people you know are safe. (An0nymauz)

I honestly was very calm, considering the situation. The bank manager, a police officer, and a bank employee had to hold the door closed the entire time because it would not shut completely from the inside…so in my mind (it did not actually happen), I could picture it ripping away. Thank the Lord, it never did.

My family and everyone I know personally are safe. The only thing we lost was my car… I should post a picture of it. People I know through connections have lost their homes and all of their belongings.

Is this your first encounter with a tornado? Did you have any family or friends greatly impacted by the tornado? (Belongings destroyed, lives lost.) How do you feel about all of the national attention your story has received? (diffikolt)

This is my first PERSONAL encounter with a tornado. My husband lost his home 14 years ago, and of course I’ve seen news coverage of tornadoes that have affected others I know over the years.

No CLOSE, personal friends who were greatly impacted by the tornadoes, but we definitely know families in our high school’s community and church community who have lost their homes and everything inside of them.

It’s very strange all the attention our story has received. Very surreal. At times I don’t feel like we deserve any of it at all. Of course our story means something to us because it is OUR story, but there are so many others who experienced much, much worst. However, it has been nice in a way in that it has given me a platform to share my faith in Jesus Christ.

I will probably keep my rear end at home next time… or seek shelter in an UNDERGROUND shelter. Above ground wasn’t my favorite…

Other redditors had some fun with the AMA, likening it to another safe-related dilemma on Reddit that had nothing to do with natural disasters.

What was in the vault??!!! (whosthedoginthisscen)

It was the safety deposit vault so it was hundreds of secure boxes along the walls.”

“Makes reddit account, does an AMA, and actually tells us what’s in the vault (and didn’t even need to make their own subreddit!), all in the past three hours. Today, OP was pretty damn cool,” responded NYR99.