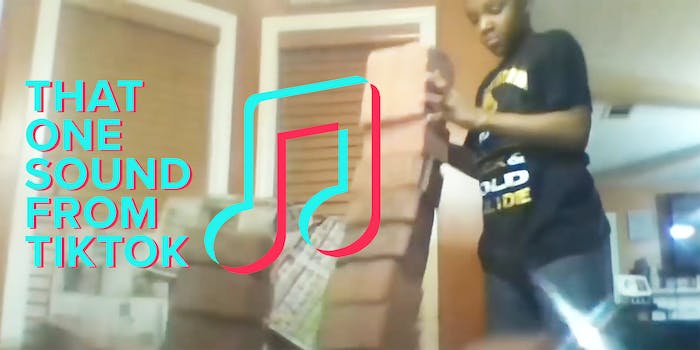 The remixes of ‘Oh no! Our table! It’s broken!’ are shattering TikTok

The TikTok sound has broken some people's brains.

This week’s sound is one that seems like it was produced for maximum dramatic effect—the ear-splitting crash of broken glass, the anguished but matter-of-fact response. Yes, our table is broken but we can rebuild it. And we can remix. It’s happening on TikTok right now.

This sound has the advantage of being instantly recognizable, thanks to its nearly comical opening crash, reminiscent of the beginning of Billy Joel’s “You May Be Right.”

One of the more popular sounds on TikTok, posted over the summer by chefsbrim, has been used in more than 640,000 videos, including a trend where people tried not to laugh while lip-syncing the line “Oh no! Our table! It’s broken!” This trend was reported on by local news stations.

Others got more creative in their interpretations.

And now, there’s a surge of remixes.

The line has been edited into Britney Spears’ “Toxic,” Toto’s “Africa,” My Chemical Romance’s “Welcome to the Black Parade,” the O’Reilly Auto Parts jingle, Rick Astley’s “Never Gonna Give You Up,” Phil Collins’ “In the Air Tonight,” and Capone’s TikTok-viral song “Oh No.”

There are also some original remixes.

This feels spiritually connected to another viral TikTok sound: Sarah Paulson screaming “The killer is escaping” in American Horror Story: Asylum, which also got a solid remix.

The original video appeared on America’s Funniest Home Videos in 2016 and features a boy stacking bricks on a table, which appears to be indoors. The person filming is next to someone else who is filming him on their phone. When the table collapses, more than a dozen bricks come with it.

After a dramatic pause, comes “Oh no! Our table! It’s broken!” At the very end, someone makes another obvious statement: “Well, the table broke.”

It’s not clear when the video was initially filmed, however.

It was posted to AFV’s official Vine account in February 2016, and multiple versions were re-uploaded to YouTube over the years. But it appears to have started getting popular on TikTok in late 2020.

There’s now “Oh no! Our table! It’s broken!” merch, which seems like the logical endpoint for this trend. It’s also broken some TikTokers as well.