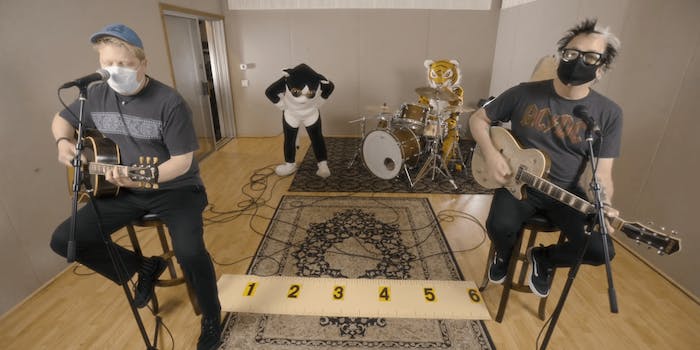 Finally, the version we've all been waiting for.

If necessity is the mother of invention, boredom must be it’s dad, churning out less important, although often entertaining fare. Like this new video from The Offspring. The punk band, known for songs like “Come Out and Play” and “Pretty Fly (For a White Guy)” was supposed to be on tour right now but, obviously, those plans on our hold. Instead, they put their drummer in a tiger costume and recorded a cover of “Here Kitty Kitty” as made famous in the recent Netflix hit Tiger King.

“Hey, Guys!” the band wrote in the YouTube video’s description. “Like many of you, we are going a little stir crazy these days and we wanted to do something fun to put a smile on our faces, and hopefully on some of yours too.”

The song tells the tale of Carol Baskin, who Joe Exotic (the titular Tiger King) claims killed her husband and fed his body to her tigers. Here’s a sample of the lyrics.

Everything was fine, just as sweet as wine
But her husband went and disappeared
But then it got a little crazy, it got a little hazy
And the cops said, “There’s somethin’ wrong here”

Exotic, who’s real name is Joseph Maldonado-Passage, even went so far as to hire a Carol Baskin look-alike to feed hunks of meat to tigers in the original version of the video.

Those of you who watched the docuseries might have noticed something odd about it. Well, okay, you might have noticed many, many totally bizarre unbelievable things about it. One thing some people might have overlooked, given all the other insanity, is that Exotic’s rather squeaky voice we heard in his interviews, somehow transformed into a smooth baritone during his music videos.

This, as The Offspring pointed out, is because it’s not Exotic singing.

The song was, in fact, written and recorded by Vince Johnson and the recently deceased Danny Clinton, collectively known as The Clinton Johnson Band. Exotic hired the duo to write and record music for him. He would then film music videos of himself lipsyncing and pretending to play guitar. Exotic never paid the band, instead, telling them their music would be used in a soon to be released reality television show. That show, as followers of the Netflix series know, never came to fruition, after a mysterious fire destroyed most of the footage.

“I had no idea he was going to Milli Vanilli the songs,” Johnson wrote in an email to Vanity Fair “It was a couple of months and two or three songs [into the collaboration] when I was on YouTube one night and just happened to look up Joe Exotic. And there he was, lip-syncing and acting like the ghost of Elvis. I called him up, I was hot…And he bamboozled me about his reality show—that it was coming soon and he would make everything right as rain. I just wanted the proper credit.”

At least from The Offspring, the band is getting that credit. People seem to be enjoying the new version of the song/video, which features dancers in cat costumes, guitarists in masks and, naturally, a tiger on a skateboard.

This isn’t the only new version of the song. Earlier this month, metal band Everyone Dies in Utah recorded a version that’s also currently available on YouTube.

There’s just something about the song’s combination of ridiculous premise and well-composed music that must make it tempting for musicians to recreate.

Although The Offspring said they had a slightly different motivation.

“The Offspring wives were group texting recently,” they wrote in the video’s description, ” and while they all agreed that they truly love their husbands, there are times when they’ve absolutely felt like feeding us to the tigers. In that spirit, we hope you enjoy this random song & video.”