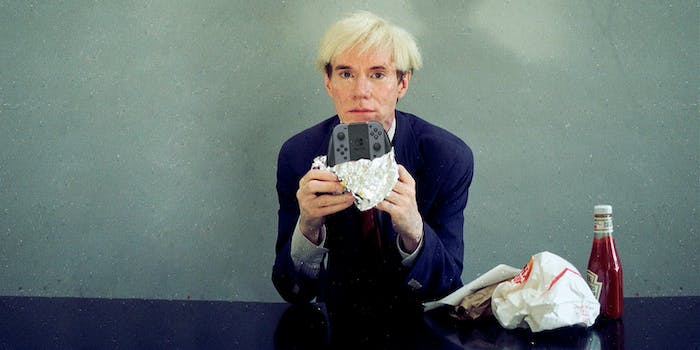 It's become a damn meme.

The main selling points of Nintendo‘s new Switch are the new Zelda game and the ability to use it as both a mobile device and a TV-based console. But a secondary selling point is that the cartridges taste really really bad.

Nintendo has coated Switch games with a bitter chemical called denatonium benzoate, to discourage kids from chewing on them. It seems to have had the opposite effect on childlike adults, though: Putting Switch carts in your mouth is now a damn meme.

It all started in late February on video game site Giant Bomb’s loose talk show, Unprofessional Fridays, which you may remember as the show that started the White Guy Blinking meme. Host Jeff Gerstmann popped a Switch game into his mouth on video to confirm the terrible taste, and discovered it was just as horrifying as promised.

Gerstmann’s stunt started a trend of spinoff videos and tweets that peaked around the Switch’s March 3 release date. Here’s just a small sampling of people who touched their tongues to Nintendo Switch cartridges in the name of science (or web traffic):

Okay, so, turns out Nintendo Switch cartridges taste awful so kids won't eat them. I, uh, just licked one and can confirm: TASTES BAD MAN.

Want to know what a Nintendo Switch game tastes like? https://t.co/q5SJWdV3pZ

Nnintendo: "oh we made the Switch cartridges taste bad on purpose so no one would try and eat them"

YO ITS YA BOY SNACKDOX COMING AT YOU WITH A VALIDLY VAIN TASTE REVIEW!!! OF NINTENDO SWITCH GAMES!!! REMEMBER TO SMASH THAT LIKE BUTTON!!!! pic.twitter.com/dPrsA1Lxdo

The Switch-tasting posts have become such a common trope on Twitter and YouTube that people are already spoofing them, tasting things that are … not Switch cartridges.

Of course, the prevalence of the meme has led people to wonder whose bright idea it was to start eating video game cartridges in the first place.

Why do the switch games taste bad? The real question is why you're even tasting them. They're game cartraiges. What were you expecting?

why are people taste testing the Nintendo switch cartridges? Like who thought that needed to happen.

You want to know why the Switch cartridges taste terrible? You aren't supposed to put them in your mouth, lol.

Where does the Switch meme go from here? Nowhere, basically. The meme and the ironic meta-meme already exist, and there’s only so many ways to make a joke about the revolting taste of video games. It’s a nice little bit of marketing by Nintendo—some people like the Switch specifically because of its cartridges’ acrid flavor—but its long-term prospects as a meme are nil.

Next time a major video game system comes out, though, you can bet people are going to lick it, just to be sure.