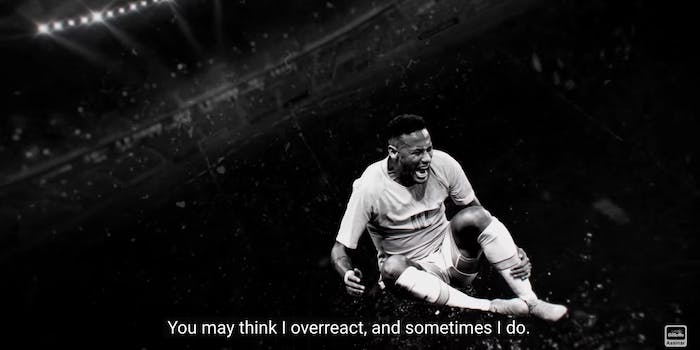 'When I act like a brat it isn't because I'm a spoiled child...'

During this year’s World Cup, Neymar da Silva Santos Júnior, better known as simply Neymar, became a worldwide sensation for his athletic abilities—as well as his outrageous flops and overacting, Now the Brazilian football star has issued an explanation of sorts for his behavior in a new Portuguese language ad for Gillette razors.

In the ad, Neymar says, [translated from Portuguese] “You may think I overreact, and sometimes I do,” as well as “When I act like a brat it isn’t because I’m a spoiled child… but because I still haven’t learned to deal with my frustrations.” He also added that he “took time to look at myself in the mirror and become a new man.”

The fact that he was undoubtedly paid loads of money for the ad seems to have cheapened the statement for many people, and the ad has been roundly mocked on Twitter.

Yeah, poured his heart out after he got paid by Gillette.

Just have to say no to things like this. Neymar has the talent to change the game but instead he makes it laughable and shameful. Kids should not wear his jersey, don't flop like he does and please don't whine like he does. #coolkidsjustplaythegame #slowmotionexposesyou

And, naturally, some of the old memes showed up.

Although a few people did jump to his defense.

All the defenders would go after him and it frustrates him. I as a (Paris and Brazil) fan am proud to wear his jersey because Neymar is on the track to becoming a great legend.

He is a MEGGA star,he will only become a much better footballer,after a broken leg!!! Best wishes man!!

Neymar ends the add by saying, “I fell. But only those who fall can get up. You can keep throwing rocks at me, or you can throw your rocks away and help me get up. Because when I do get up, buddy, the whole country gets up with me.”

It seems as if Twitter has decided to keep throwing rocks, so Neymar may to need to get up on his own this time.