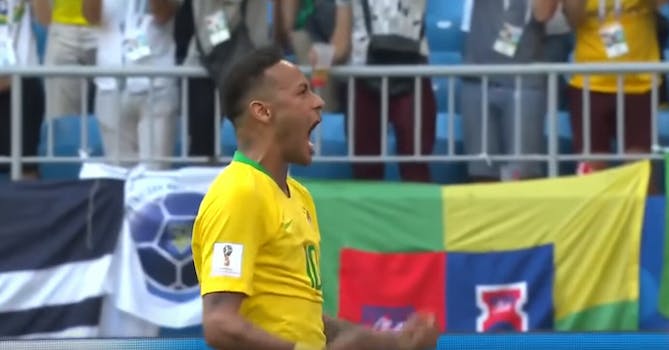 Neymar might be a great soccer player, but he's a terrible actor.

Neymar da Silva Santos Júnior, better known as just Neymar, is an amazing soccer player who plays forward for both Paris Saint-Germain and the Brazil national team. He’s considered to be one of the best players in the world, but he’s also considered to be one of the biggest flop artists of all time. His over-the-top antics have gotten him almost as much attention as his soccer abilities.

For instance, in a recent World Cup match with Mexico, Neymar helped his team win 2-0 with one goal and one assist, but he’s gotten way more attention for an incident in which people think he overreacted.

Neymar was already on the ground when Miguel Layun of Mexico came over to retrieve the ball and, either inadvertently, or possibly on purpose, stepped on his ankle. Considering that the players are wearing cleats, it probably hurt. But it’s not like Layun stomped on him, and it certainly didn’t seem like it warranted Neymar’s outrageous reaction.

Neymar went to church and got some of that holy water. pic.twitter.com/XUNofyLGwI

At the time, a Fox Sports commentator referred to Layun’s step as “serious misconduct,” but a later tweet showing the incident was captioned “Fair or Foul?” seemingly questioning the legitimacy of Neymar’s reaction.

To all the idiots making memes & making fun of Neymar , He was already injured & Mexican player did this , it’s easy to judge but only he knew how he felt , after that he slowed down a bit because of pain . Y’all ignore the fact Brazil won bc of him & start trolling LMAO #BRAMEX pic.twitter.com/EamIYyDVjv

The majority of Twitter seemed to come down squarely against the player.

And the Oscar goes to #Neymar @neymarjr pic.twitter.com/Jv1vvymRL4

Mexican head coach Juan Carlos Osorio also felt that Neymar was being ridiculous, although he didn’t seem nearly as amused as most people. “It’s just shameful that so much time could be lost over one player… ” he said according to ESPN, “That is a lesson for even children who play. This should be a game of men, and not so much clowning around.”

Before the incident, Neymar drew an amazing 10 fouls in Brazil’s 1-1 draw with Switzerland—the most of any player in 20 years. Although it’s easy to claim that Neymar was intentionally drawing the fouls, it’s also possible he’s being targeted by opposing teams. It’s also worth noting that game was only his second start after recovering from a very real broken foot.

The truth might lay somewhere in the middle. It’s hard to look at some of the footage of Neymar and not see ridiculous overacting going on, but it’s also possible that his bad acting is his attempt to call attention to him being intentionally targeted by other players. One thing is for sure: as Brazil moves on in the World Cup, everyone is going to be keeping a close eye on Neymar, if for no other reason than to gather more material for memes.

Correction: A previous version of this story featured Brazilian defender Thiago Silva as its lead photo.