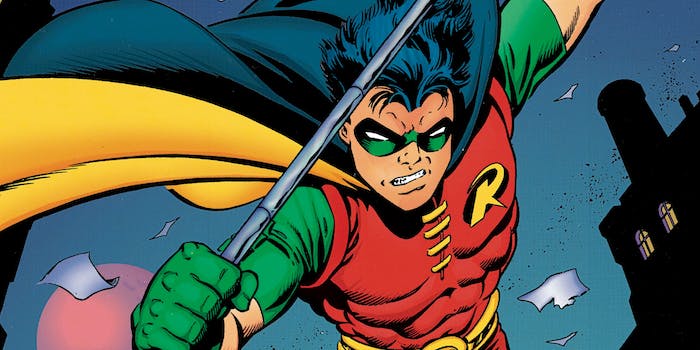 After more than 30 years in the Batman comics, Tim Drake just got his first male love-interest.

Created in 1989, Tim Drake is the third of Batman’s Robin sidekicks. As a foil to his predecessors Dick Grayson (the original Boy Wonder) and Jason Todd, he was intended as a more intellectual Robin, leaning into Batman’s “World’s Greatest Detective” moniker. He’s long been a recurring character in the Batman comics franchise, starring in youthful spinoffs like Teen Titans and Young Justice. And now, 32 years into his role, he’s joined the ranks of DC’s canonically queer superheroes.

This revelation was a surprise to many, because DC and Marvel often publicize this kind of storyline before it actually arrives on the page. But the anthology comic Batman: Urban Legends let Tim’s coming-out arc develop naturally, with issue #6 seeing him acknowledge his feelings for another boy. Screencaps from the issue quickly spread online, because while Batman: Urban Legends isn’t necessarily a big-name title, a lot of fans are invested in Tim as a character, and are excited to see another queer member of the Bat-family. (The first, of course, was Batwoman.)

The storyline in question co-stars Bernard Dowd, a teenager who goes to the same high school as Tim Drake. Initially characterized as friends, their relationship deepens thanks to some classic superhero romance tropes. Tim has to rescue Bernard from a supervillain, and since he does this in costume as Robin, there’s some juicy ambiguity about whether Bernard knows that Tim and Robin are the same person

“Ever had a lightbulb moment?” says Tim during one of his internal monologues. “Like something out in the ether has been taunting you, teasing you. Like you know you’re supposed to be on the same page as your brain but not everything made sense.” That “lightbulb moment” is clearly Tim’s realization that he has feelings for Bernard, leading into a cute scene where Bernard asks Tim on a date, and Tim accepts.

Speaking to Polygon, the comic’s writer Meghan Fitzmartin made it clear that DC isn’t putting a specific label on Tim’s identity just yet. “I wanted to pay tribute to the fact that sexuality is a journey,” she explained. She also confirmed that Tim’s feelings for his former love-interest Stephanie Brown “have been/are 100% real,” and that “Tim is still figuring himself out.”

Some Batman fans have long hoped that Tim Drake would be rewritten as canonically queer. His friendship with Superboy is often interpreted as having romantic subtext, and in 2012, the website Comics Alliance included him on its list of “10 superheroes who need to come out.” However the idea of a queer Robin has a complicated history.

In the 1950s, a book titled Seduction of the Innocent kickstarted a moral panic about inappropriate content in American comic books, raising concerns about violence, horror, and sexuality. This led to the creation of the Comics Code Authority, which effectively censored mainstream comics for decades. Batman was one of the biggest names mentioned in the book, singled out due to what the author perceived as homoerotic subtext between Batman and his teenage sidekick.

In later decades this idea evolved into often-homophobic jokes about Batman and Robin’s relationship, most notably the SNL parody series The Ambiguously Gay Duo, and the recurring mockery of 1997’s blatantly homoerotic Batman and Robin movie, in which Robin is an adult. This is almost certainly explains why recent Batman movies don’t include Robin. But in the comics and cartoons, the situation is very different. Characters like Tim Drake and Dick Grayson have long been portrayed as Bruce Wayne’s adoptive kids, a team of allies and protégés who are widely referred to as the Bat-family. Batman is very clearly a paternal figure, and Tim’s love life is his own business. The events of Batman: Urban Legends #6 are a welcome move, expanding Tim’s role among the core Batman cast—and confirming what many fans were already speculating.