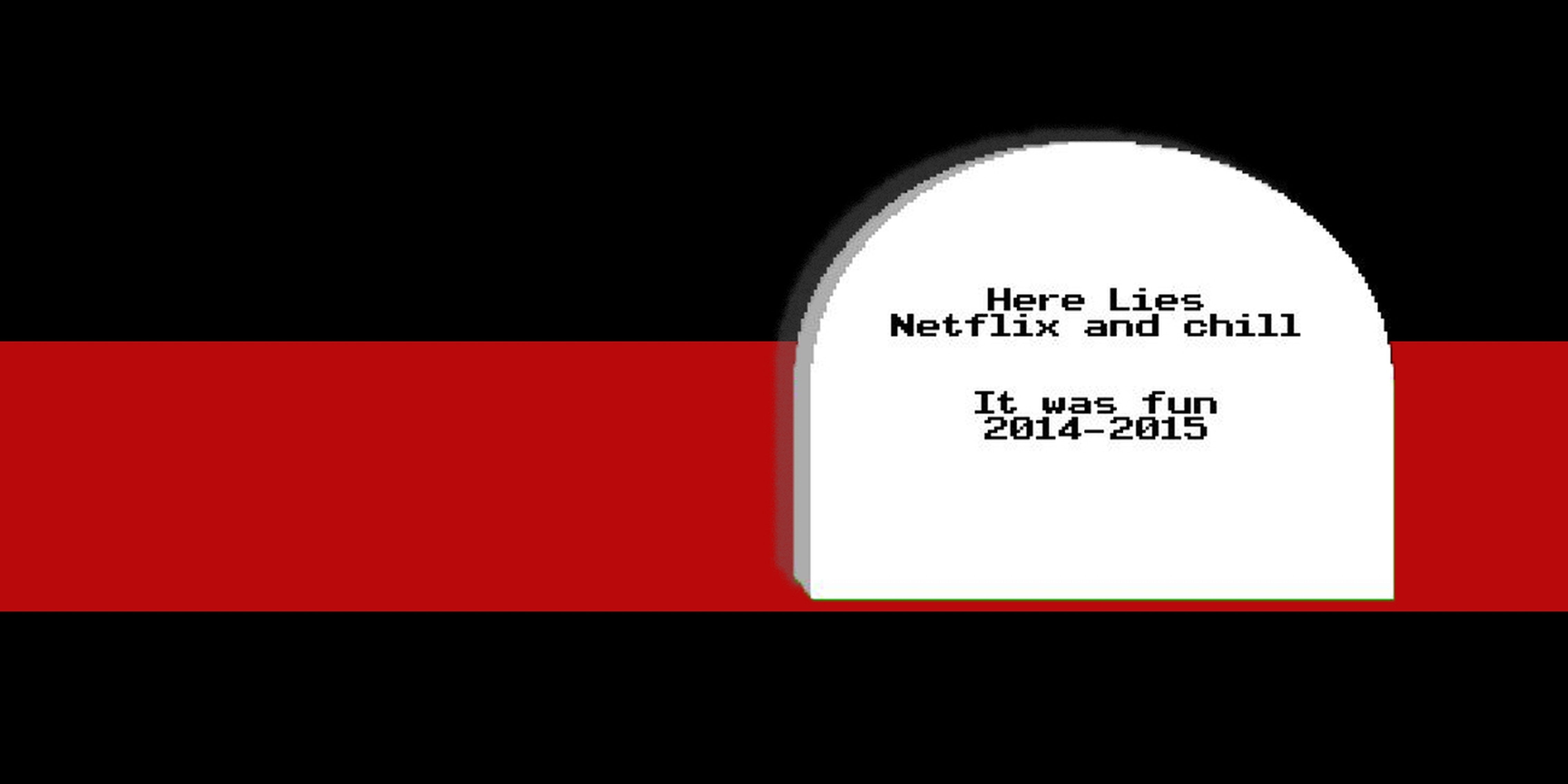 The untimely death of ‘Netflix and Chill’

Is it the end for the meme?

Apparently everyone’s just trying to Netflix and Chill—and it’s getting to be overkill.

Throughout September, the First Annual Netflix and Chill Festival‘s Facebook event made the rounds. It was originally supposed to be held earlier in the month at UC Berkeley but was cancelled due to an overwhelming number of attendees. By that time, about 6,500 people had RSPV’d. Last week, the page amassed some 23,000 attendees.

While the original Facebook page claimed that the party was scheduled for Saturday, UPenn students who reached out via direct message were granted access to a separate, private event page for the actual event.

The real festival finally happened last Thursday night at an off-campus house at the University of Pennsylvania. While the original Facebook page claimed that the party was scheduled for Saturday, UPenn students who reached out via direct message were granted access to a separate, private event page for the actual event.

But who was behind this viral Facebook phenomenon? Pablo Rochat, who happens to be brand director for an app called Knock Knock, which lets you connect with people in the immediate area.

Although sponsored by a business that aims to infiltrate the phones of college-aged students, the event didn’t start out that way. Rochat had actually met a girl in an Uber Pool ride (for those unfamiliar with the service, you can opt to pick up other passengers with a route similar to yours for a reduced fee), got her number, and started texting her. When she politely declined Rochat’s joking invitation to “Netflix and Chill” with a “haha no,” he thought it’d be funny to create a private Facebook event called Netflix and Chill with the location set as his place.

This time around, she said maybe. Then Rochat realized that a Netflix and Chill event could be an event that Knock Knock organized as a way to engage with their target user base. 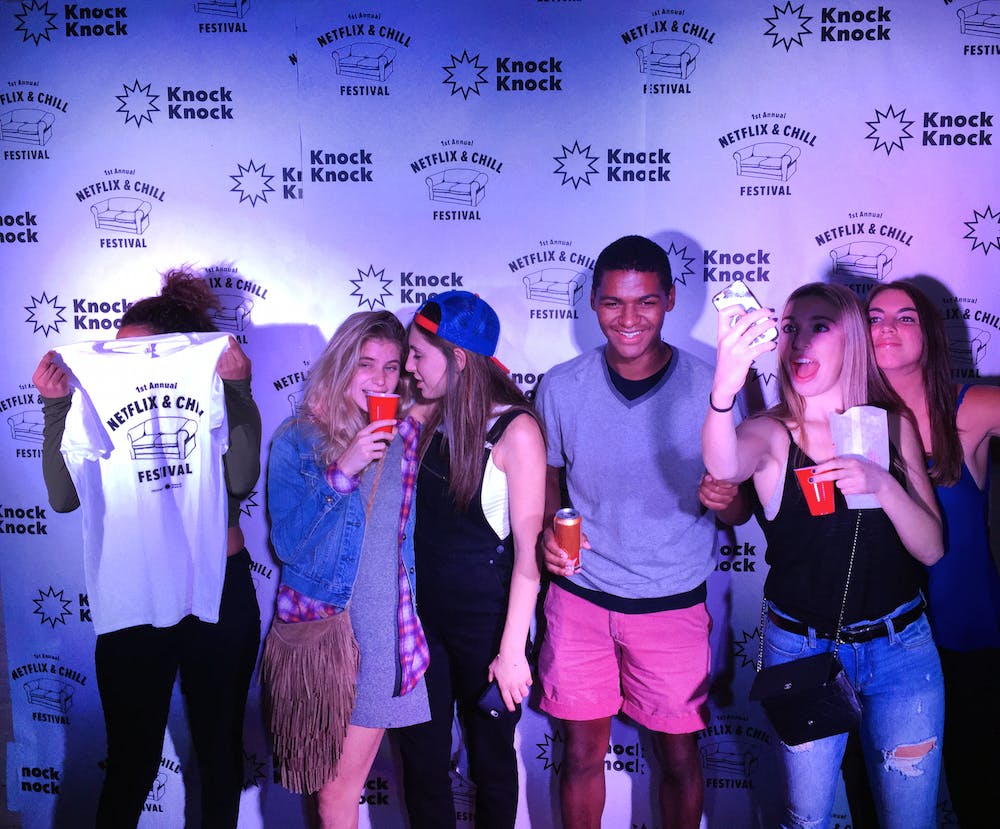 “It’s an experiential meme. We’re taking something online that we all see on Instagram and bringing people together around the joke,” Rochat told the Daily Dot. “We’ve created an event where people can connect through, rally around this meme, and all laugh about it.”

The festival itself was 150 people chilling in an off-campus house yard, where they watched Knocked Up and munched popcorn. Guests were encouraged to download and use Knock Knock, and they of course got free startup swag, including hats and T-shirts. Rohat and Knock Knock plan on talking to other schools after the success of the UPenn event. 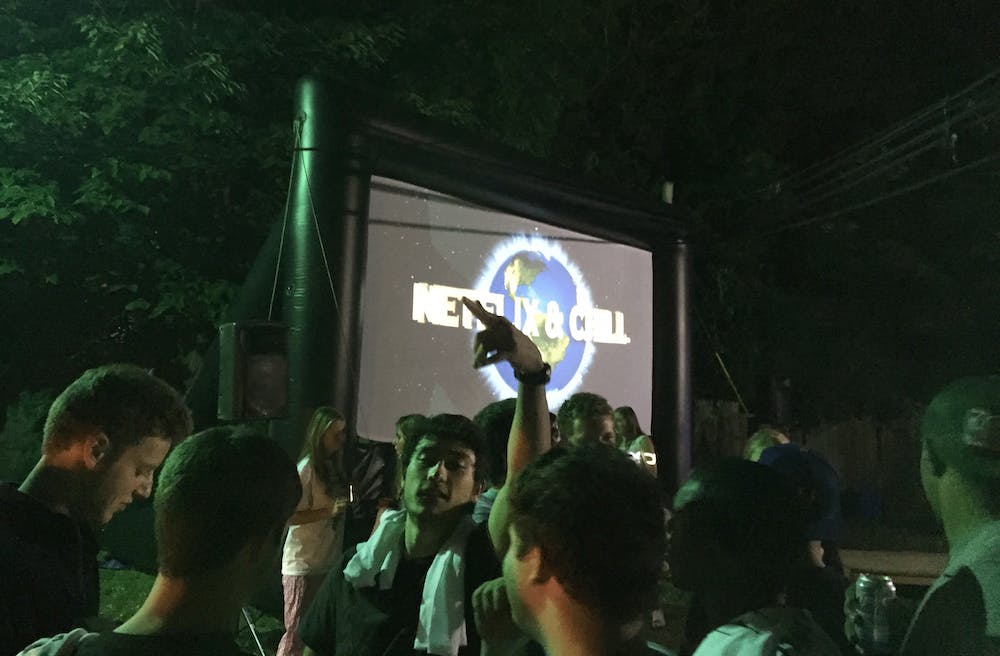 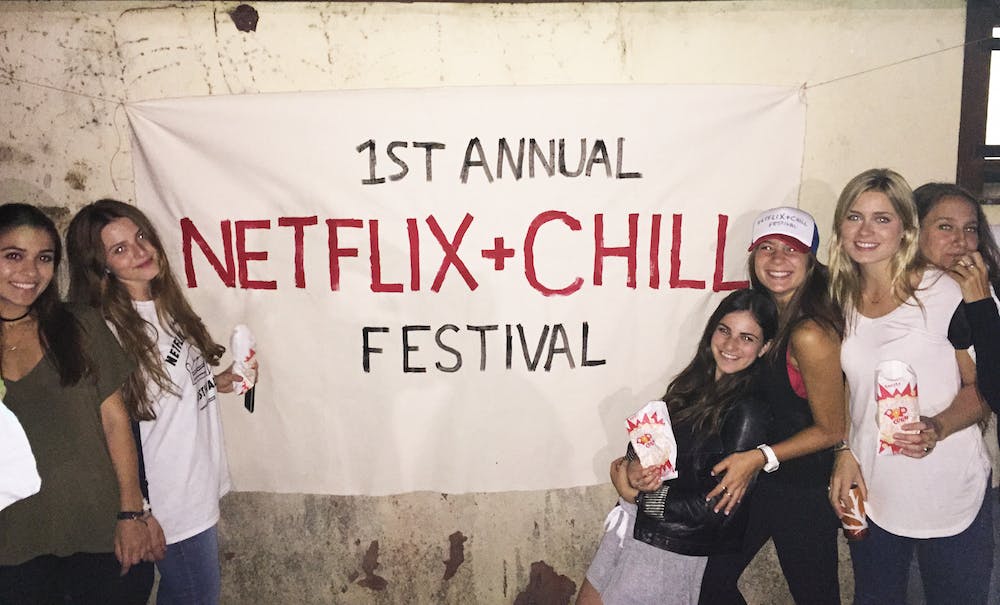 If the number of attendees for the Facebook event weren’t proof enough, Netflix and Chill has pretty much become pretty damn popular. But has the meme finally peaked, or worse yet, jumped the shark?

But has the meme finally peaked, or worse yet, jumped the shark?

Sandra Song over at Paper Mag has already declared the meme dead, and we have to co-sign her obituary. As she pointed out, Business Insider ran an explainer on the Internet phenomenon to help those out of the loop not look like a dork when they come across the term in conversation. A Salt Lake City-based newspaper owned by the Church of Latter Day Saints called the Deseret News included it on a list of teen slang terms that you ought to know. Even before both of those pieces were published, the meme hit the remix stage of its life cycle as people tried to keep it fresh. That’s when you know something is on the way out.

To make matters worse, moms are finding out what happens Sally goes on over to Billy’s house to Netflix and Chill. Netflix itself is now in on the joke, tweeting out “Anyone want to #Emmys and Chill?” the night of the awards show. The video-streaming platform also rolled out instructions on how to build a button that turns off the lights and block phone calls, making it super easy to give up on watching whatever flick was “recommended for you” and start hooking up.

If the brand itself getting in on the meme isn’t enough to send it to its gave, there’s this DIY guide to being Netflix and Chill for Halloween. 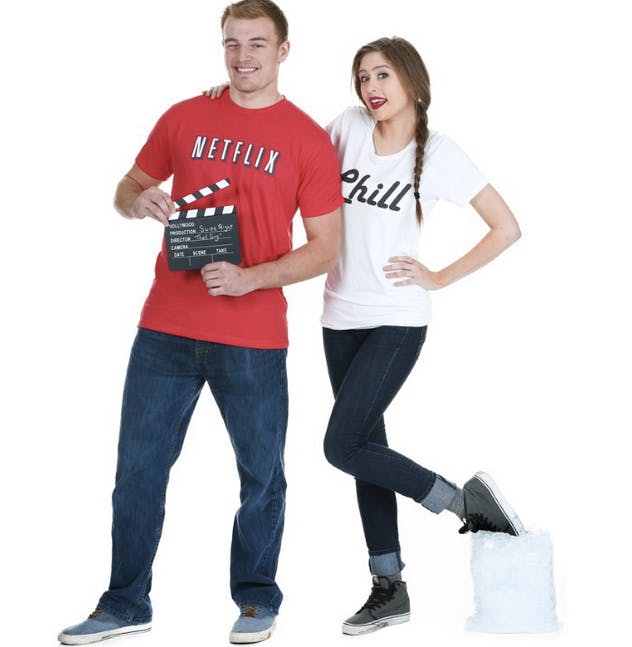 The HalloweenCostumes.com post is a bit out of touch, though, explaining that a Netflix and Chill invite may come from someone who “slides through your DMs.” In actuality, the goal is to “slide into DMs“—a slide through would be a bit aggressive, as you’d end up coming out the other side of their DMs. Furthermore, the post suggests a one-night stand costume for someone who third-wheels with you and bae on All Hallow’s Eve. But Netflix and Chill isn’t typically a one-time happy ending; it’s shorthand used by regular hookups, friends with benefits, or real significant others. The post seems unaware of the true essence of Netflix and Chill, yet tries to promote a costume based on the meme. Another nail in the coffin.

Coming on the top of all this, an app has now ingeniously commodified the meme into a viral marketing strategy—and Netflix and Chill has reached the end of its heyday.

Coming on the top of all this, an app has now ingeniously commodified the meme into a viral marketing strategy—and Netflix and Chill has reached the end of its heyday. What started off as a joke living in corners of the Web such as Black Twitter and eventually Tumblr and Reddit finally trickled into your mom’s Facebook feed, tweets by the brand, and Tinder profile pictures. Netflix and Chill is over. RIP.

Although the meme is dead, that doesn’t necessarily mean that it’ll be gone anytime soon. We can still laugh about it, and we don’t expect social media to hastily ditch the phrase. Eventually, the masses will agree that the term has become uncool and it’ll fade into the meme graveyard where “Sure, Jan” and the Dress have also been laid to rest. No memes live forever. But that doesn’t negate how colossal they were in the moment.

The next Netflix and Chill probably won’t emerge until something new revolutionizes how we watch movies as the streaming service did. Our parents had dinner and a movie; we had Netflix and Chill. As for our children? Hologram and Cram might be next.